We look at the possibility of DSD higher-quality audio support in Cubase, a plug-in to help you write ringtones for Nokia phones, and a new patch for Windows users of Cubase SX/SL 3.02.

While there was no major news for Cubase users at this year's Frankfurt Musikmesse, Steinberg showed a couple of new products, such as The Grand 2 (featuring a second, brand-new acoustic piano), and some interesting new technology. ASIO (Audio Streaming Input Output) has been the technology for getting audio into and out of Cubase for nine years now and it was originally invented as a way of dealing with multi-channel PCM (Pulse Code Modulation) audio at relatively low latencies. At the Musikmesse this year, Steinberg introduced ASIO 2.1, a small, yet significant update to the ASIO 2 technology introduced at the Winter NAMM show in 1999 that adds support for DSD (Direct Stream Digital) audio, of which the best commercial example of usage is currently in Super Audio CDs (SACDs).

Very briefly, DSD is a different way of representing digital audio, compared to PCM (Pulse Code Modulation). With PCM, the exact level of the audio is sampled and represented with the available bit resolution (24 bits, for example) a specified number of times per second, according to the sampling rate (44100 times per second at a rate of 44.1kHz). DSD is similar in that the signal is sampled a specified number of times per second, but the samples store whether the signal rose or fell since the last sample. The sampling rate used for DSD is significantly higher than the highest we might consider working with in PCM: 2.8224Mhz, 64 times higher than 44.1kHz.

At Musikmesse, Sony showed a Windows workstation featuring a prototype, ASIO 2.1-based audio device developed by Sony that supported the recording and playback of DSD and PCM digital audio. While the debate continues as to which is the 'better' high-resolution audio format between 192kHz/24-bit PCM (for applications such as DVD-Audio) and DSD (for SACD), DSD has the advantage of having both a wide dynamic range and a high bandwidth, which is easier to balance than with PCM. Although DSD requires a fundamentally different approach to working with digital audio data than PCM, the fact that there will be a low-cost, ASIO-based platform for working with high-quality DSD audio in the near future is great news, since it will open up DSD development and could eventually lead to a DSD-capable version of Cubase or Nuendo.

In last month's Cubase Notes we mentioned the 3.02 (build 622) update to Cubase SX/SL. Since this was released, a performance-related problem has emerged that has affected some users (including users of Nuendo versions with the same build number). As has been noted by various people on the web forums, working with certain user-interface elements, performing actions such as opening and closing of windows or zooming, has caused disk dropouts during recording and playback of audio.

The good news is that not all users are affected by this problem: it doesn't seem to be an issue for Mac users, or for Windows users with reasonably high-spec machines, especially dual-processor models. The better news is that the fix is only a small patch, which updates Cubase to v3.02 build 623. Windows users of Cubase SX/SL 3.02 can download it from ftp://ftp.steinberg.net/Download/. 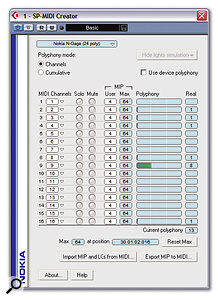 With Nokia's SP-MIDI Creator VST Instrument, you can use Cubase to make better ringtones for Nokia mobile phones. Imagine the creative possibilities...At the other end of the fidelity spectrum, no-one could argue that mobile phone ringtones do anything but enrich our musical culture — could they? To aid in their composition, Nokia have released an update to the Nokia Audio Suite of tools, which Steinberg were including in their 'World of VST' discussions at Frankfurt. The main part of the suite is the combination of SP-MIDI Creator, a VST Instrument that simulates the sound and behaviour of the built-in sound engines and capabilities of most Nokia phones, and Auralisation Tool, a VST effect that simulates their acoustics and DSP.

SP-MIDI Creator (SP stands for Scalable Polyphony) is an extension to a standard MIDI file, brought forward by the MIDI Manufacturers Association, that specifies how a given file should be played on devices with differing polyphony capabilities, and was conceived as a solution to creating a single MIDI file that could be played back on different 3G and similar mobile devices. Nokia's SP-MIDI Creator allows composers to use Cubase to preview how a piece of music will sound on different Nokia phones, and add the appropriate commands to that MIDI file. (You must export the file from Cubase before adding the commands from within the plug-in.)

Aside from the obvious application of creating ringtones, you could also use the plug-ins creatively — or even in a practical way for post-production people who need to create sound effects for phones and so on. Nokia Audio Suite is a free download, although you have to be a member of Nokia's Developer's Resources Forum first (also free to join). Visit www.forum.nokia.com for more information.