The news that Waves' range of quality plug-ins is now available for DP adds to the activity in an already interesting month for Digital Performer users — despite a delay in the release of 4.1.

As the enthusiastic upgraders and updaters amongst you no doubt already know, DP v4.1 was not released on August 8th as MOTU originally promised (and as mentioned in my last column) due to last-minute bug-squashing difficulties. And as I write this article it's still not out, so this is not quite the Performer Notes I thought it would be. That'll have to be next month — hopefully!

One of the most powerful and useful plug-ins available for DP4 — the Renaissance Channel by Waves.However, if the delay of 4.1 is the bad news, there's also plenty of good news this month. First of all, rumours are rife that DP 4.1's MAS audio engine has undergone a major rewrite, significantly boosting speed and efficiency. This should make using DP on older Macs a much happier experience — and if OS 10.3's promised speed increases materialise, by Christmas we should all be able to dismiss further thoughts of owning a G5 (yeah, right). Also this month, the world of MAS OS X plug-ins probably quadruples in size, with the release first of the Audio Ease Altiverb convolving reverb for DP4, and then the entire range of plug-ins by Waves. Finally, there's great news from Rob Martin, the DP4 patchlist guru, who's worked out a way of enabling custom banks in the new XML patchlist format.

If you're one of the many DP users who (quite wisely, some might say) have been holding off moving to OS X, the release for DP4 of the vast array of plug-ins by Israeli software company Waves might well give you cause to reconsider.

In case you're unfamiliar with Waves, they make some of the most desirable plug-ins out there, at a price point that reflects the quality on offer. They were the first third-party company to offer plug-ins for Digidesign's Pro Tools, back in the early '90s, but now their entire range is available for TDM, VST, RTAS, DirectX and MAS formats. They achieve this broad compatibility by developing plug-ins that run courtesy of a 'Waveshell' for each individual format. So if you installed every single plug-in by Waves on your OS X system running DP4, only one new MAS plug-in would appear in Library / Audio / Plug-Ins / MAS — the WaveShell-MAS bundle — but this gives access to the plug-ins themselves, which are stored in a folder in Applications / Waves. In practice, you don't notice any difference in operation compared with 'normal' MAS plug-ins. 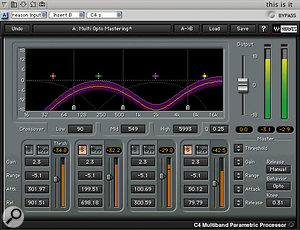 The flexible C4 multiband EQ and dynamics processor, from the Waves Gold Native bundle.If the installation is unconventional, then the way Waves' product line is offered is positively barmy, and has been known to reduce grown men to whimpering wrecks. Although it is possible to buy individual plug-ins, it's more cost-effective to go for one of the bundles on offer. For example, the most affordable, the Native Power Pack, contains seven plug-ins, including the excellent L1 Ultramaximizer limiter. Other bundles include Renaissance Maxx and Masters Native, but if you can afford it, it's better to go for either the Gold or Platinum Native bundles, as these contain some of the cheaper bundles, as well as extra individual plug-ins. Confused? Don't worry, it's all part of the Waves initiation rite! Simply put, individually available bundles for DP4 are:

As you can see, there are no overlapping plug-ins between bundles. But then there are the 'super-bundles'...

So with a product range like that on offer, where do DP users start? It all depends on what sort of plug-ins you're looking for. Waves have always done mastering-style processors well, and there are plenty on offer in their current range. The brickwall limiter L1 Ultramaximizer is something of an industry standard and typically allows greater increases in gain with fewer artifacts than DP's MasterWorks Limiter. L1 can sound quite chunky, imbuing source material with a characteristic 'oomph' and scale, but when something more neutral is required, the L2 Ultramaximizer from the Masters Bundle is a good choice. The amount of additional perceived loudness this limiter can extract from a mix has to be heard to be believed, but it manages to remain very transparent.

If you're after mastering-style multiband compressors, there are two on offer. The C4 multiband parametric processor is part of the Gold Bundle, and can do compression, expansion, EQ or dynamic EQ across four bands. The Linear Phase Multiband Compressor, from the Masters Bundle, takes this a stage further, with compression, EQ and limiting across five frequency bands, adaptive thresholds and automatic makeup gain.

Some of the gems of the Waves range are far less complicated, though. Personally, I can't get enough of the Renaissance Equalizer, which is the perfect antidote to every insipid digital EQ out there. Ultrapitch does very convincing ADT and harmony creation, and far weirder stuff, whilst the Renaissance Reverberator is one of the best MAS reverbs this side of Altiverb. Enigma, MondoMod and Doppler, though maybe not 'bread and butter' tools, are all very useful for sound-design and experimental use.

Clearly, with the Platinum bundle costing the best part of £2000 in the UK, Waves isn't for everyone, but Renaissance Maxx is more affordable, at under £600, as is the Native Power Pack (around £460). And if you can stretch to the Gold or Platinum bundle, you won't be disappointed. To get yourself immersed, visit www.waves.com, where you can download a 14-day demo of all their plug-ins.

Dot stuff: If you use Waves plug-ins in DP4, there's one thing you need to watch out for. Some of their plug-ins seem to lay siege to the keypad's 'dot' (decimal point) key, which is such a crucial part of the shortcut (sometimes called the 'dot trick') for specifying new wiper (playback) positions in DP. Until Waves fix this, there's no way rround it, though you can use an alternative shortcut, Apple-T then Tab, to achieve exactly the same thing.

Character reference: When modifying '.midnam' or '.middev' files directly (not using CherryPicker) remember that some characters are forbidden in XML, such as '&', '<' and '>', plus quotation marks and apostrophes. Many synth patches use these, but you can either opt just to ditch them or to replace them in the patch-list with the XML equivalents: '&amp;' '&lt;' '&gt;' '&quot;' and '&apos;'.

DP on the 'net: For an up-to-date list of Audio Units plug-ins supported by DP 4.1, plug-in and soft synth recommendations, downloads, links and lots of other Digital Performer information, drop by my website, www.bigwood-digital.com. It's all free!

The new, improved Altiverb 3 offers better efficiency, much improved impulse-response selection, and the same sensational quality.Audioease's convolving reverb plug-in, Altiverb, has now been updated to version 3.0 and is compatible with DP4. Improvements over previous versions include greater efficiency, improved impulse-response selection, the display of VR movies in the plug-in window, and the ability to make use of mono-in, stereo-out impulse responses on stereo audio tracks, allowing processor overhead to be effectively halved, but with little impact on quality. The Audio Ease impulse-response library continues to grow, too, with such delights as live rooms from Westlake Studio and Cello Studios, Los Angeles; three French cathedrals; and classic EMT plate and digital reverbs. Various mp3 and download demos are available from www.audioease.com.

I first mentioned CherryPicker in August's Performer Notes. To recap, this freeware application helps with the creation of '.midnam' files (MOTU's new XML patchlist format for OS X — see September's Performer Notes) and can also translate OS 9's FreeMIDI patchlists into '.midnam' format. Crucially, though, it can also be used to add new banks to a '.midnam' — something that might prove invaluable to owners of synths such as the Roland JV1080, which can be expanded with additional cards. And CherryPicker can now create 'custom' banks — user-configured banks that reference patches stored across multiple banks in your synth. So, for example, you could create a bass bank, drawing together every bass sound in the factory, user and expansion banks of your synth. Previously the .midnam format didn't seem to allow for this, but Rob Martin, who wrote CherryPicker, recently found a solution. The new version of CherryPicker, which now also supports OS 9 OMS patchlists, is a free download from www.savagetranscendental.com/cherrypicker 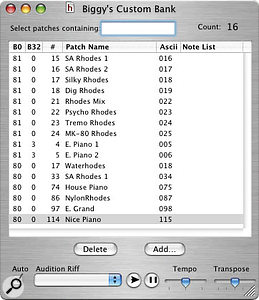 Creating your own patchlist banks in DP4 is virtually painless with Rob Martin's freeware CherryPicker.In OS 9, patch information for synth expansion cards could be cut and pasted into pre-existing FreeMIDI patch lists from extra files that MOTU provided, but as yet there's no equivalent for this in OS X. Consequently, you have to do a bit of work to restore those lost expansion banks, but CherryPicker makes it easier.

The basic process is as follows, using the JV1080 as an example. First of all, gather any necessary information about how to select banks on your expansion cards. This could well be a combination of controller 0 and 32 bank-change messages and a SysEx string, but your synth manual should spill the beans. Alternatively, you could consult MOTU's old FreeMIDI patchlists; deciphering the header information isn't difficult. For example, examine the following, taken from the JV1080 orchestral expansion patchlist:

When you have the information you need, open the pre-existing JV1080 .midnam document in CherryPicker and, under the Patch Banks tab, click 'Add Bank'. Name it as required, by double-clicking its name and typing in a new one, then type in the bank select messages sjown in the screen at top right of this page. 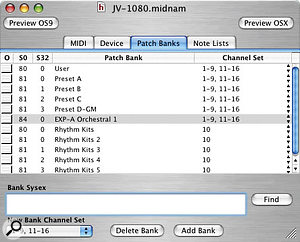 The first step to adding the patches of the EXPA Orchestral 1 card to the JV1080's '.midnam' with CherryPicker.Click the bank's 'O' (open) button, and then begin the arduous task of typing the patch names into the window that appears. Start by clicking the 'Add...' button, then specify the number of patches you want to add in the panel that appears. Ticking 'Set Bank Selects to Bank's values' saves you from having to fill in all the B0 and B32 fields, as you've already defined those values for the entire bank. The ASCII column is there for those synths (most of them, actually!) whose patch numbers don't tally up with program change numbers — ie. a patch-change message of value 0 selects the first patch in the bank, but this appears on the synth's display not as patch 0, but patch 1. CherryPicker can cater for this automatically with its 'ASCII offset' field.

When you've finished your typing marathon, you can close this window. Then save the extended '.midnam' you've created, via the File menu or standard Apple-S shortcut. You can also Preview extended or modified '.midnams' in either FreeMIDI or XML formats, before committing them to disk.

Creating custom banks is easier. Here you create a new bank in the same way, but don't set bank select messages, and don't add any 'blank' patches to the new bank. Instead, open up the existing banks from which you're going to draw the contents of your custom bank, and then option-drag individual patches into the new bank's window. When you're done, just close all the bank windows and Preview or Save the new '.midnam' as usual.

Custom banks require quite a few extra lines in the '.midnam' to specify bank selection for each patch. As usual, more committed patchlist tinkerers can modify the '.midnam' directly in a text editor. If you're one of those, here's what you need to know. A standard patch entry is like this:

So all that's new is the <PatchMIDICommands> tag, and entries for controller 0 and 32 values. Who says XML can't be fun?