the synth engines that are most synonymous with dubstep are probably Rob Papen's Albino and Native Instruments' Massive (and its accompanying Massive Threat library). However, for those of you who haven't got the spare cash for either of these, Logic's ES2 can do a great job of nailing those classic dubstep sounds with a little help from a few choice insert plug‑ins. This article will focus on building the basic, familiar dubstep bass sound. You may find it useful to visit /sos/jun07/articles/logictech_0607.htm to learn the basics of ES2.

You'll need to create a new software instrument track and call up an instance of ES2, but ES2 doesn't have a proper default patch, so first you'll have to create one, by holding down the Option key and clicking every parameter on ES2 to reset it to its default value. You should then save that plug‑in setting as your ES2 default (a default patch is included in the accompanying Logic files).

Once you have your default patch, the following steps will get you started:

We're going to use ES2's basic FM synthesis capabilities to generate a really buzzy wave that's perfect for creating dubstep bass lines. In the ES2, FM is achieved by modulating the frequency of oscillator 1 with the output of oscillator 2.

We now have the building blocks for our bass sound.

The next part of creating that classic bass sound is to modulate the fIlter cutoff with a tempo‑sync'ed LFO. ES2 has two filters that can be used in either series or parallel configurations. Set the filters in series and move the Filter Blend control fully to the right. In the filter 2 section, set type to 24dB, cutoff to maximum, and Res (resonance) and FM controls to zero. 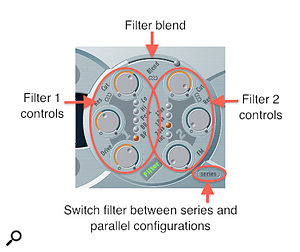 The controls for ES2's dual filters.Now we're going to modulate that filter.

We're now going to apply some final touches in the Effects section. To fatten the sound of your patch, turn the Sine Level control up to one o'clock. This adds a sine wave at the frequency of oscillator 1. 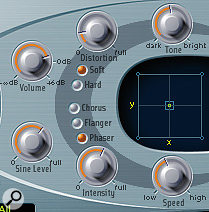 ES2's built-in effects will help us to start thickening up the sound of our dubstep bass.

We'll now make up for ES2's quite basic internal effects by using Logic's insert plug‑ins to improve the sound of the patch.

Go to the channel strips and, in the first insert slot, go to Amp and Pedals / Pedalboard. The Pedalboard insert effect offers great opportunities for parallel effects chains, which are perfect for adding a bit of distortion and subtle modulation to our patch. Parallel distortion is often a much better option on bass sounds, as it will let you subtly add harmonic content without weakening the bass area.

Now let's thicken the bass part with Logic's Stereo Delay plug‑in in insert slot two. Short delays offer a great way to thicken a bass part without pushing it to the back of the mix in the way that reverb often does.

Now let's go back to ES2 and produce some variations; you'll need to copy the existing channel strip to a new track by going to the Track menu and selecting New With Duplicate Setting.

You'll find that changing the wave of the modulator can have a dramatic effect on the sound of your patch, giving some nice variations in timbre that you may wish to save. Also vary the amount of FM modulation; you will generally find that brighter, buzzier sounds require more FM, while mellower, fatter sounds are created with less.

There's so much more that can be accomplished with ES2 and Logic's fearsome suite of plug‑ins that this article barely scratches the surface, so do keep experimenting. In the meantime, enjoy your new dubstep bass!