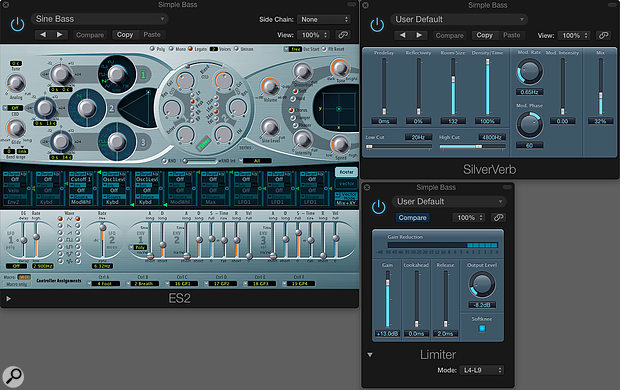 Screen 1: A simple single-oscillator sound created with ES2 can sound huge with the addition of reverb followed by dynamics processing. Here the Limiter plug-in is used to bring up the perceived level of the reverb effect after a note has finished playing.

We often talk about how dynamics processors such as limiters and compressors can be used to reduce the dynamic range of a vocal part, or to add a bit more sustain to a snare drum, yet there are many other interesting uses for dynamics processing. In this month’s Logic workshop we look at ways in which those same processors can be used to create larger-than-life sounds from synthesizers and electric guitar sources. You can hear examples of all of the techniques described in this workshop by going to the dedicated media page for this issue here: http://sosm.ag/nov15media.

Let’s begin by modifying a synthesizer bass part. We will use dynamics processing to accentuate the reverb tail that occurs after each note ends, to make a bass part that ducks in a really interesting way. Create a new software instrument track and add to it an instance of the ES2. Using the ES2, create a simple single-oscillator bass sound. Picture 1 shows the settings I used for my patch. Next, go to the insert area in the channel strip and add an instance of the reverb plug-in SilverVerb. SilverVerb has a wonderful metallic quality, giving it a much more artificial sound than Logic’s other reverb effects. This makes it perfect for when you want a reverb to really stand out. Let’s set up SilverVerb to give a medium-sized reverb. To do this, set the Room Size to 132 and roll the high end off by using the High Cut parameter to give a slightly warmer sound (see the settings in Screen 1). Now create a simple bass riff that leaves plenty of space between notes to allow the reverb tail to breathe. Audio Example 1 demonstrates what this sounds like.

To give the patch more movement and to make it more exciting, let’s add some dynamics processing. Add Logic’s Limiter and set it so that the Gain parameter is at maximum and the Lookahead and Release are at their minimum values. Turn the Output Level knob down to compensate for the increase in level. Lastly, at the bottom of the Limiter plug-in, click the disclosure arrow and make sure the mode is set to L4-L9 which is the legacy Limiter model (see Screen 1). Hit Play to audition the bass part. When the synthesizer plays you should now hear the limiter heavily compressing the bass part, then as soon as a note finishes, the Limiter quickly releases the gain reduction to make the reverb sound suddenly louder at the end of each note. This has the effect of making a simple bass/lead line sound huge, and is perfect for sparse arrangements with lots of room to fill. You can hear this in Audio Example 2. When a note isn’t playing, notice how the reverb is suddenly pushed right to the front of the mix. To get the reverb level to rise up in time with your song, you can tweak the release time of the Limiter, gradually raising it until you have achieved the desired pumping effect. You can increase the effect further by adding more compression. Audio Example 3 shows what this would sound like if Logic’s Compressor plug-in was added after the Limiter. It is also worth spending some time experimenting with Logic’s different Limiter models. I suggest opening up the Limiter plug-in again and setting the Mode combo box to LX (Audio Example 4) or LX ISP; you will have have make a few adjustments to the release time and gain value to get similar results. Try a release time of 560ms and adjust the gain slider so that you are applying a similar amount of reduction as before.

Another way to control the relationship between time-based effects and the original source material is to put the effects onto a bus and then duck the level of the bus from the source material. The advantage of a bus is you can use much more radical effects chains whilst keeping the source material unprocessed. Take the synthesizer part from the first example, bypass the effects and then render it to an audio track by Ctrl-clicking on the MIDI region and choosing ‘Bounce In Place’. Now go to the audio track’s Channel Strip and create a send, then turn the send level up to 0dB so it matches the dry signal. This time, rather than using reverb, let’s pick a different time-based effect: add Logic’s Stereo Delay plug-in and set the delay time so that you have an eighth-note triplet on one side and a crotchet on the other (see Screen 2). Next put Logic’s Compressor plug-in straight after it, and from the Side Chain combo box in the top right-hand corner, choose the audio track with the bass part you bounced earlier. Now set the Compressor up so that it compresses the delay effect heavily when the bass part is playing and then releases the gain reduction once the note stops. I set my threshold to -40 and ratio to 12:1 to achieve 30dB of gain reduction, and set my attack to 0 and release to 80ms to make the compressor change quickly. Hit Play, and you’ll hear that when the bass is playing it sounds relatively dry as the compressor is suppressing the level of the delay effect. Then, between the notes, the compressor ceases gain reduction and the delay effect level rises, filling in the gaps and bringing the effect to the foreground (as hear in Audio Example 5). As the processing is all done on a bus you can be much more aggressive, because you’ll only be effecting the wet signal. In Audio Example 6 I have added Logic’s Flanger and Rotor Cabinet plug-ins between the Delay and the Compressor for a more pronounced effect. 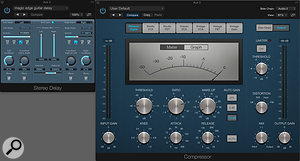 Screen 2: Adding time-based effects to a bus and then ducking them from the original source can open up lots of interesting processing opportunities. Here a delay plug-in is being ducked using a compressor immediately after it.

Electric guitar is another great source to apply ducked time-based effects to, achieving massive ambient effects whilst maintaining the clarity of the original source. Create an audio track and add you favourite guitar-amp simulation plug-in, set it to a clean preset and then record a simple spacious guitar part (refer to Audio Example 7). Navigate to the guitar track’s Channel Strip and create a send to a bus. Now you are ready to add your time-based effects. First of all, add an instance of Logic’s Stereo Delay plug-in and set it up as shown in Screen 3. Add SilverVerb and create a cavernous-sounding reverb by setting the Room Size to 182 and the Mix to 100 percent (see Screen 3 for detailed settings). Now, whilst still on the bus, add Logic’s Compressor plug-in at the end of the FX chain and set the side-chain input to be the guitar audio track. As per the previous example, set up the compressor so that it applies lots of gain reduction when the guitar is playing and then quickly releases the guitar to fade up the effect level. Hit Play to hear the results. You should hear something broadly similar to Audio Example 8 — when the guitar is playing it sounds relatively dry, and as the notes decay, the reverb and delay level fade up.

Screen 3: Adding time-based effects to a bus being fed by a guitar and then ducking them from the original source can give some really complex effects that are somewhere between a guitar and a synthesizer pad.Let’s make one last processing chain. This time we are going to combine two buses together to create a wonderfully complex guitar sound that’s somewhere between a guitar and a synthesizer pad. Go back to the guitar audio track and create another send to a bus. On the new bus go to the first insert slot and add an instance of Logic’s Pitch Shifter. Set the Pitch Shifter so that the Mix is 100 percent wet and the Semitones field is 12, transposing the input up an octave. Now add further reverb and modulation inserts to give the pitch-shifted guitar both sustain and stereo width. I’ve used SilverVerb and the Ensemble effect. Lastly, add the Compressor plug-in and again set it to duck the effect when the guitar plays. It should sound something like Audio Example 9.

There is so much more that can be accomplished using these types of processing techniques across multiple buses. Enjoy experimenting!