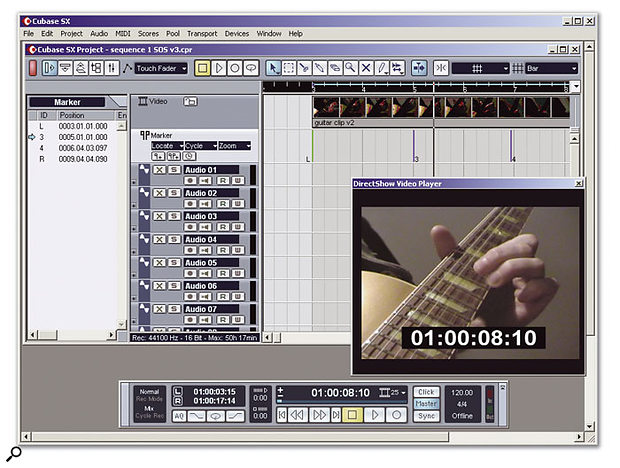 Until its recent update, Cubase SX did not have all the specific tools needed for easy tempo changes when, for example, working to picture — but a close look at the tools it does have reveals ways of getting the job done for those who haven't yet upgraded.

This month's Cubase Notes column discusses some of the tempo-related issues that arise when you're writing music to picture in SX. However, before starting we should make sure we're clear about a bit of terminology...

A Point To Remember

In SX and Nuendo, the term 'hitpoint' is used to mean the slicing of audio loops so that their tempo can be adjusted to match that of the Project. In producing music for picture, media composers often use the same term to describe the timing of key on-screen action (for example, everyone's favourite cartoon mouse hitting an equally famous cartoon cat on the head with a hammer). These on-screen events may need to be reflected, or 'hit', by the music — hence the term 'hit point'. All references to hit points this month use the term in the 'media composer' sense!

Assuming that video playback is synchronised to SX (either using an external video player or, as is becoming increasingly common, a digitised video file), media composers generally have to consider two technical hit point-related tasks before the composing actually starts. First, the required hit points in the video sequence have to be identified and their positions marked within the SX Project. Second, some consideration needs to be given to how these hit points relate to the bar/beat structure of the sequence, as it is often easier to make a musical 'hit' feel natural if it falls on a musical division. The second issue is sometimes resolved by the use of modest tempo variations. This requires calculations along the lines of 'what tempo change is required in bar six so that the start of bar 12 coincides with the hammer connecting with the cat's head at timecode 01:03:32:12?'

If you read Mark Wherry's November 2002 review of SX V2, or if you have already upgraded, you will know that tempo manipulation is one area that Steinberg have improved. However, at the time of writing, many users are still happily using V1.0.6 and what follows provides one simple approach to these tempo-related tasks in 'pre-V2' SX — although it will also work in V2. In a future column I may look at how this might be done more efficiently, given the improved tempo functions of the new release.

When working with digitised video clips, using a Timecode display in the Transport Panel has one obvious advantage for media composers: the Nudge buttons (the + and ­ buttons) then work at single-frame resolution. This is great for stepping back and forth through a section of the video to find the exact frame where a change of on-screen action occurs that needs to be hit. Once located in this way, a new Marker can be added using the Add Marker button on the Marker Track. If the Marker Track is selected and the Inspector is active, this new Marker will appear there, along with its bar/beat/tick position.

Got The Time, Mate?

Markers and the Marker Track provide the most straightforward means of giving visual reminders within the sequence of where the hit points lie. Usefully, Markers in SX can be toggled between two modes — Musical and Linear — and this is achieved via the clock or note icon on the Marker Track.

The difference between these two modes is most easily explained by an example. In Musical mode, all Markers are locked in position relative to the bar/beat structure of the project. Let's imagine we have a project that is at a tempo of 120bpm (and therefore each bar lasts exactly two seconds). If we place a Marker at the start of bar three it will be positioned exactly four seconds into the arrangement (let's assume that this is the exact moment when the hammer hits the cat's head). If we then halve the tempo of the Project so that it more closely matches the mood and pace of the initial on-screen action, that Marker will still appear at the start of bar three, but this now occurs eight seconds into the project. However, the cat still gets the hammer treatment at four seconds, so, as a Marker for the on-screen hit point, Musical mode is not very helpful.

Fortunately, in Linear mode the Markers are locked to absolute time. Using the same example, the Marker initially placed at the start of bar three is locked to a point four seconds into the arrangement rather than a particular bar/beat position. Changing the tempo to 60bpm now leaves the Marker at this same absolute time (so it is still positioned where the hammer meets the cat's head) but, in terms of the bar/beat structure, the Marker now coincides with the start of bar two. Therefore, in Linear mode Markers can be positioned at an exact frame position (see the 'Nudge, Nudge' box for the most straightforward way to do this) and, regardless of any tempo changes subsequently added within the Project, they will stay locked to the on-screen events. Once positioned, Markers can be given a suitable name (for example, 'cat gets hit') in the Marker Window (opened via the Project / Markers menu).

Once hit point Markers are in place, their position relative to the bar/beat structure can be examined. Unless you are very lucky, it is quite likely that the majority of these do not fall on an exact bar or beat division. In some contexts, this may not be an issue. In others, however, the music may only feel 'right' if the on-screen hit point coincides with a bar or beat division. This is especially likely with animation, where, traditionally, the music hits everything happening on-screen. Indeed, such an approach to music for picture is commonly referred to as 'Micky Mousing'. Trying to get all those hit points to fit a simple bar/beat structure is an impossible task!

There are various creative solutions to the problem (for example, inserting a bar in a different time signature), but a common solution is to experiment with tempo changes within the cue, to see if hit points can be pushed or pulled closer (or onto) a exact bar or beat division. Logic's Tempo Operations window is very useful for this, and the lack of a direct equivalent in SX left many media composers scratching their heads. However, a combination of the Marker Track's Inspector display and the graphical Tempo Track editor do provide a simple-to-use alternative, even if it is somewhat less elegant. 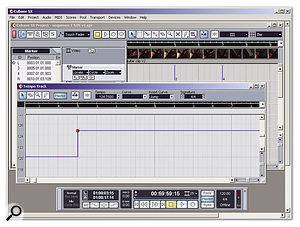 The positions of time-locked markers relative to the bar/beat structure are updated in the Project window as edits are made in the Tempo Track window.Again, an example provides the best way to illustrate the process. Let's assume that the Markers numbered three and four in the first screenshot (see opening screen) represent hit points. Fortunately, Marker three falls exactly onto the start of bar five. However, Marker four falls slightly before the start of bar seven, and it might be difficult to hit this without making the music sound a little odd. One solution might be to adjust the tempo of the track between Markers (hit points) three and four, either by inserting a jump in tempo at the start of bar five or by inserting a more gradual tempo change.

The second screenshot, above-right, shows the same Project with the Tempo Track Window open and zoomed in to the section between bars five and seven. Using the Draw Tool, a tempo change event has been added at bar five. When this edit point is selected, it can simply be dragged up and down to alter the tempo jump. As this happens, the position of Marker four in the Project window automatically adjusts relative to the bar/beat structure. As shown in the screenshot, increasing the tempo to 124.75bpm at bar five results in our hit point at Marker four lying exactly on the start of bar seven. Unfortunately, the Position column in the Inspector for the Marker Track is not automatically updated while the edit point is being moved, so to see the new exact bar/beat position of the Marker you need to close the Inspector and then open it again.

Gradual tempo changes can provide a smoother transition for hit point matching.The third screenshot (right), shows the same end result achieved via a gradual ramp in tempo between bars five and seven. Two tempo edit points were added and, with the Insert Curve set to Ramp, the edit point at bar seven was simply dragged upwards until the position of Marker four within the Project Window hit the start of bar seven. This resulted in a tempo of 129.5 bpm at the start of bar seven. Of course, exactly the same end result could have been achieved with a non-linear change in tempo based upon several edit points between bars five and seven.

While this approach to tempo adjustment for matching hit points to bar/beat divisions is a bit on the fiddly side, it does work, and with a little practice can be done fairly quickly. However, there are two obvious limitations to it. First, while such manipulation of tempo can produce some very neat arrangements of hit points on to particular bar or beat divisions, if used without care it can also produce some very unmusical results. Where the mood of the on-screen action actually requires a quickening of the pace, it is obviously not appropriate to slow the tempo down just so that a particular hit point lands exactly on the bar. Clearly, some other creative solution would be required.

Second, when you're planning a series of such tempo changes through a particular musical cue, the sort of tempo manipulations described above have to be constructed in sequence, moving from the start to the end of the cue. Returning to the start of the cue to make further adjustments to the tempo there will, of course, result in all the subsequent time-locked Markers (hit points) also being moved relative to the bar/beat structure. The only solution is to make sure the tempo changes work musically prior to committing to the actual composing. One simple check is just to watch the video playback with a MIDI click running. It soon becomes clear if any of the tempo changes are too extreme to work in the context of the on-screen action.