With the latest version of GarageBand, Apple have become the first company to integrate educational training into music‑creation software. But is this merely a simple gimmick, or a powerful new way of learning to play an instrument? 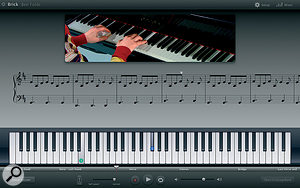 Since its introduction in 2004, GarageBand has become the entry‑level music-creation software de rigueur for beginners and seasoned professionals alike. With GarageBand, Apple succeeded where so many other music software developers had previously failed, creating an application with limited functionality that wasn't just a cut‑down version of something more expensive. By designing a simple user interface, Apple encouraged beginners to make music, but also caught the attention of professionals, many whom continue to rave about GarageBand in the press to this day.

Each new release of GarageBand over the last five years has brought additional features to the application, broadening its scope of use, but retaining the simplicity that appealed to users in the first place. For example, version 2 added a notation display, while version 3 made it easy to create podcasts or add soundtracks to movies made with iMovie. GarageBand '08 finally implemented the ability to add tempo changes to a song, and also introduced a feature called Magic GarageBand, providing backing tracks that could be used as the starting point for a song.

Garageband has always catered for two different types of users: those with musical experience, who can play and record music into the program, and those without, who can create a song by employing various loops and other pre‑made musical building blocks. But with the latest version of GarageBand, introduced as part of Apple's new iLife '09 bundle earlier this year, Apple is not only making it easier for beginners to make music, but also providing a teaching platform to help users learn and develop musical skills. 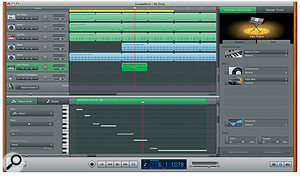 GarageBand '09's new features include a more refined appearance that makes the application clearer for beginners, while nodding in the direction of the professional.

There have been many attempts over the years at creating music software that helps a user learn to play an instrument. Who remembers the Miracle Piano Teaching System, for example, developed in the early '90s? But rather than offering music teaching in a separate application, Apple have built music lessons straight into GarageBand; and this is the first time, to my knowledge, that such educational functionality has been integrated into music‑creation software.

Apple supply 18 Basic Lessons with GarageBand '09, nine of which are designed to help you learn the basics of playing the piano, while the remaining nine are for those wishing to study the guitar. One of each of these lesson types is installed with iLife, and the remaining 16 can be downloaded free from the new Lesson Store within GarageBand.

A lesson is presented in a new full‑screen view, where you can watch a video of the teacher at the top of the screen, while seeing a live, animated representation of the teacher's keyboard or fretboard at the bottom. One particularly nice touch is that you can also choose to see synchronised notation alongside (or instead of) the view of the instrument; and, in the case of the guitar lessons, you can opt to display tablature alongside the notation, just the notation, or chord symbols.

Each lesson offers both instruction and a piece of music, which is introduced at the end of each lesson as an exemplar of the techniques that have been discussed, performed with a suitable instrumental accompaniment, which the student can play along with. The piece of music chosen at the end of Piano Lesson 8, for example, is the 'Minuet in G' from Bach's Notebook For Anna Magdalena, and this is provided with a suitably baroque‑sounding string accompaniment.

As with a GarageBand Song, a lesson also features a timeline, complete with transport controls. And, like the regular GarageBand timeline, the lesson timeline is completely interactive, making it easy to step back if you need to hear something again. To help you navigate a lesson, the timeline is divided into different sections that represent the different parts of a lesson, and these function in exactly the same way as sections one might create on GarageBand's arrange track.

One very nifty feature available in the lesson's transport controls is a speed slider, enabling a student to slow down the playback of the lesson in order to better understand what the teacher is doing, or help them practise a particularly tricky bit. Fortunately, GarageBand mutes the teacher's voice if you're not playing the lesson back at a normal speed, sadly avoiding any amusement that may have ensued; and although the quality of the time‑stretching is adequate for the purpose, it obviously gets a little grainy once you get to the lowest, half‑speed setting.

In addition to the Basic Lessons, GarageBand '09 also offers Artist Lessons, where a popular artist will teach you to play one of their songs. So far, there are 10 of these lessons available, at least in the US, and the list of featured artists includes Ben Folds, Norah Jones and Sting. Each Artist Lesson costs $4.99 and can be downloaded from the Lesson Store within GarageBand, while payment is handled via Apple's on‑line store in a web browser window.

If the Artist Lessons prove popular, I'm sure Apple will create more content over time, and it certainly provides another way for the company to 'monetise' additional content for GarageBand in much the same way as they've done with Jam Packs. It would be particularly interesting if Apple allowed third‑party content to be sold via the Lesson Store, although I'm not sure I can see this happening, since it would require a large effort in terms of quality‑controlling the results.

It would, however, be good to see Apple partner an educational establishment such as Berklee College of Music in the US, or an examining body such as the Associated Board in England, as a way to provide further high‑quality musical training for all levels of technique, particularly for the latter's graded exams syllabus.

In that overview of GarageBand '09's new lesson features, you might have noticed certain items sounding rather familiar, such as the transport controls or synchronised notation. Similar to a regular GarageBand song? Although I don't have particular knowledge of how GarageBand is developed, it seems reasonable to assume that, under the wonderfully‑presented façade, a lesson is essentially a GarageBand song. If you think about the lesson functionality in this way, suddenly it seems obvious to build music lessons into a sequencer in the way Apple have done for GarageBand, and it's almost surprising that other companies like Steinberg, Cakewalk, and the rest, haven't tried this.

One advantage of integrating lessons into GarageBand is that it makes it relatively easy to provide the 'Open in GarageBand' button that can be clicked on in many of the lessons. This essentially opens the lesson as a GarageBand song, enabling it to be used as a starting point for a student's own musical explorations, adding tracks and loops as they see fit. But there must be so many other facets of a sequencer that could be exploited for similar educational gain, such as singing lessons based on Auto‑Tune‑like algorithms, to mention but the tip of the musical iceberg.

In the past, products for computer‑based musical training have enjoyed perhaps limited success. Going back to a product such as the Miracle system, its profitability was surely not helped by the cost of producing the bundled piano keyboard hardware at the time, whereas today, it's possible for almost anyone to walk into an Apple Store (as, indeed, many have) and buy a cheap keyboard for less than 100 units of the appropriate tender. With even an entry‑level Mac capable of delivering the high quality of lessons shown in GarageBand '09, the relatively low cost of modern musical hardware, and the unlimited content that could potentially be available on the Internet, computer‑based music lessons might finally have their day.

GarageBand '09 requires Mac OS X Leopard (10.5.6) and is included with all new Macs. Existing users can upgrade to the latest version of Apple's iLife '09 bundle for $79, which also includes the new versions of iPhoto, iMovie and iWeb.

In addition to music lessons, GarageBand '09 has also received a coat of paint, now appearing in that dark‑is‑professional shade of grey that's all the rage at the moment. I have nothing against dark‑grey user interfaces, but I do wonder (as I did with Pro Tools 8) where the fashion of dark‑grey scroll bars on an imperceptibly lighter grey background came from.

Not wishing to dwell on the scroll bars for too long, the horizontal scroll bar makes up for its appearance with a very nice touch. When you scroll the timeline with sufficient velocity, an indicator appears (in much the same way as when you adjust your Mac's volume, for example) to display the number of the bar currently on show at the far‑left edge of the timeline. This is quite similar to the current page display that appears when scrolling pages in Microsoft Word, and is one of those nifty‑yet‑obvious ideas you wish had always been there in a sequencer.

One positive aesthetic change in GarageBand 09's dark appearance, though, is that standard Aqua controls are no longer present in the user interface. This results in a significantly cleaner and more consistent look, especially in the Editor views and the Track Info panel, where the parameters for a Track are now given more space in a separate tabbed page from the browser.

Another nice touch worthy of comment is the way in which Regions are now represented in the Editor views. While the Region boundaries in an Editor were pretty clear in previous versions, with appropriate colour‑coding, they're now really clear, featuring a larger header that displays the name of the Region. But the icing on the cake is that each Region in the Editor now has its own play button, which automatically puts GarageBand into cycle playback mode for the duration of the appropriate Region, and plays back only that Region. Pretty neat. Like so many GarageBand touches, you just wish more of them would show up in Logic!

What makes the Electric Guitar track type special, though, is that rather than seeing the usual list of available effects and settings in the Track Info Panel, with an Electric Guitar track selected you'll see a virtual representation of a guitar rig, complete with a choice of amps and a selection of drag‑and‑drop stomp boxes. Clicking on the amp or a stomp box brings up the settings of the appropriate object for adjustment, and while the selection of effects isn't completely new, it's an elegantly simple user interface for newcomers.

Seasoned SOS readers who record electric guitars might scoff at such basic functionality, but in the same way that GarageBand has proved to be a useful and simple bread‑and‑butter sound source for keyboard players when there's nothing else to hand, guitarists might now also find themselves glad every Mac comes pre‑installed with GarageBand, for the same reason.

As a guitar‑related footnote, now that GarageBand '09 caters for guitarists with the new features for electric guitars and the guitar lessons, it seems a shame that Apple haven't made it possible for the Score view to display tablature (and maybe chord symbols). This would seem a logical follow‑through, since the lessons do have the ability to show tablature, but maybe providing a way for the user to edit such musical data was deemed too complex for the application's scope.