We look at what’s new in the eighth instalment of Reason.

In a somewhat unexpected move, Propellerhead have announced the forthcoming release, on September 30th, of Reason 8. Following the pattern of the last few years both the full version and its cut–down Essentials offshoot are being updated, and anyone who bought Reason (or an upgrade) after July 1st 2014 will enjoy a grace–period upgrade to this latest version.

So what’s new in version eight? What seasoned Reasoners will notice straight away is the new user interface design. There’s a whole new browser pane that opens on the left side of the main window, fulfilling the duties of the present Patch Browser that has previously always appeared as a dialogue box. This kind of software design (seen in Ableton Live, PreSonus Studio One and elsewhere) allows for extensive drag-and-drop functionality, and that’s exactly what Propellerhead are promising. It seems it’ll be possible to drag patches, samples, instruments and effects into the sequencer, the rack, and on to individual devices. If any devices needs to be instantiated as a result Reason 8 will do all the donkey work. 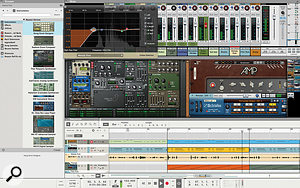 Reason 8, coming this September, gets an updated interface and new amp simulators from Softube. The Reason 8 browser, sequencer and transport panel all take design cues from operating systems like Apple’s forthcoming Yosemite, featuring a more subdued ‘flat’ look. Buttons become unashamedly 2D, all cool grey and white, and generally the photorealistic light reflections and relief shadows are being done away with. But that’s in stark contrast to the mixer and rack, which remain the same as in Reason 6 and 7, retaining all their wood–grained, shadow–strewn, 3D–rendered skeuomorphism. A bit of an odd mix, but no more so than in some other DAWs.

Next, there are two new bundled rack devices from Swedish developers Softube, offering amp and speaker modelling for guitar and bass. They look promising, but the slightly disconcerting flip side is that Propellerhead are also giving notice on the existing Line 6 Guitar Amp and Bass Amp devices. They’ll “no longer be available in the Reason rack by October 2016”, and users are encouraged to Bounce tracks in any songs that utilise them before that time. You’d no longer be able to tweak your tones, but at least you wouldn’t lose them forever.

Some users are questioning whether design tweaks and two guitar–oriented devices (which will be of most interest to a subset of the user–base) are really worthy of a whole–point version number change and a 129$129 upgrade fee. Certainly some previous releases have included a much longer list of new goodies and enhancements. But there could be additional features afoot that we don’t know about yet, so if you’re itching to be at the cutting edge you’ll want to keep your eye on www.propellerheads.se. And rest assured we’ll cover everything in detail here in SOS as soon as we can!

Some great new third–party Rack Extensions have recently come into the Propellerhead shop which explore vintage, simplistic and lo–fi sound from a few different angles.

Jiggery–Pokery Sound have released two electronic organ instruments simultaneously. If you like vibey transistor tones of the ’60s and ’70s — and who doesn’t? — they’ll both be mandatory purchases.

Jiggery–Pokery’s new transistor organ REs are updated, more flexible and much easier to use versions of their existing ReFill instruments.Combo Compact Organ ( 29$35) is an emulation of a Farfisa Combo Compact, used by Pink Floyd and many others. It’s actually several organs in one; you choose whether to use the named stops (like ‘Flute’ and ‘Strings’) or, by turning Multi Boost on, the generic flute stops labelled with footages (’16’, ‘8’, etc.). There’s also a bass section, triggered from pitches C0 to B2, amplifier drive, and a fantastically evocative mono spring reverb.

The reverb also makes it into the Combo Continental ( 29$35), Jiggery–Pokery’s Vox Continental RE, even though the original didn’t have one. But in other ways this is a faithful and great-sounding digital emulation that immediately recalls the Doors, the Monkees and other bands of decades past. The proper drawbar behaviour has been copied, so that no sound emerges until you draw either the sine (~) or reed (M) ‘Foundations’. There are upper harmonic combinations too, labelled with Roman numerals, alongside the more familiar numerical footages.

If you like your vintage more ’80s than ’60s though, try Chip 64 Synth ( 32$39) from Ochen K. This little gem generates the tones of five ‘80s and ’90s computer and games console sound chips: the TIA from the Atari 2600, the SID from the Commodore 64, the TA0x series found in Nintendo’s NES and Gameboy, the Vic–I from the Commodore Vic–20, and the snappily named SN76489 used in ColecoVision and Sega consoles. Each gets its own complement of waveforms, and there’s a simple synth architecture with multi-mode filter to shape those characteristically raw sounds from the oscillator. It’s a sound source unlike any other in Reason, full of character and interest, and should be useful in many musical genres.

Ochen K does nothing to harm his reputation as one of the most exciting and inspiring RE developers with these unique and highly usable REs. The same goes for another Ochen K creation, the EDS06s drum synth module ( 19$25). One instance generates up to six different drum sounds, all of which are synth–based rather than having anything to do with samples. The six identical drum ‘channels’ can respond to any MIDI note you choose (so it’s easy to layer several to respond to the same note), offer the same 49 waveforms and streamlined synth architecture, plus there’s distortion, reverb and delay, and you can choose the order in which the post–oscillator elements are connected using the Routing parameter. What’s more, each channel has a rear-panel Aux Send/Return loop, so it’s easy to patch other effects devices into the signal flow. You could probably tease out some vintage drum machine tones from EDS06s, but I don’t think this is the real point of it. It’s the drum synth you choose when you want something different, experimental or novel, not just another TR808. Bear in mind, too, that it’s really easy to layer individual channels on top of existing Reason drum sound sources. Just connect one of the Gate Out connections on ReDrum or Kong to an EDS06s Gate In. Then playing that corresponding channel on one of the Propellerhead devices will trigger the EDS06s.

To round off this little survey of old–school goodness, here’s a quick plug of another Jiggery–Pokery product, this time a freeware ReFill you can download from www.jiggery-pokery.com/free.html — 8–bit Magic: ZX Spectrum provides yet another option for naüve but funky home computer sounds from decades past. Despite the name, there are tones here from both the 1980s Sinclair ZX Spectrum and the Commodore 64. The charmingly simplistic sounds are faithfully captured, and presented as patches for ReDrum, NNXT and Combinator. And, if anything, the notable lack of multisampling in the NNXT patches adds yet more character, suggesting a weird but interesting mash–up between those pioneering early computers and early memory–starved hardware samplers.