There are many situations in which it is useful to process audio on a clip–by–clip — or, in Studio One–speak, Event-by-Event — basis. For example, punching in a vocal or instrument on a different day from the original recording can result in tonal differences between the original and the overdub, even if everything is done carefully. Should different equipment be used on the two days, tonal differences are even greater. Fortunately, Studio One offers a particularly strong set of Event–based tools that can help in this situation, and many others. 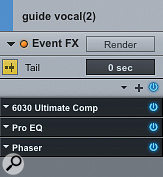 The Event FX area, populated with a few plug–ins.

Let’s just go straight for the good stuff. It is common for DAWs to have a way to render a plug–in on a single clip, but Studio One takes things to another level altogether with Event FX. This feature allows you to put an entire effects chain on a single Event, play through it in real time, and edit as needed before committing to rendering the audio — which, at any time, can be reverted back to the live, real–time effects with a single click. Pretty darn cool, say I.

We all know how addictive plug–ins can be, and how easy it is to take a powerful computer to its limits by throwing them around like candy. Now think about how much faster you can bring your machine to its knees instantiating effects on a per–Event basis! Sarcasm aside, everything has its limits, and you’ll hit them pretty quickly if you start using a lot of real–time Event FX on a number of Events.

The Event FX feature is really easy to use; but before you can use it, you have to see it, which means making the Inspector panel visible. Select any Event, and the Event inspector shows up in the Inspector panel, with the Event FX section immediately below the Event name. Click the disclosure triangle at the left, and an insert effects rack drops down. This rack works just like mixer channel insert effects racks: you can add a new effect by dragging it from the Browser and dropping it, or click the plus sign at the top and choose an effect from the drop–down menu. Drag effects to reorder them, drag a complete FX Chain from the Browser, all the same stuff as usual.

When your beautiful effects chain is tweaked to perfection, simply click the Render button to generate a new file with the effects. The insert rack disappears and the Render button now says ‘Restore’. As you’ve likely surmised, clicking the Restore button is how you make the effects live again.

Once Event FX have been rendered, the effects rack disappears and the Render button becomes the Restore button.

There is also a Tail field, so that additional time can be added on the end of the render to accommodate delay and reverb tails. And, as with insert racks in mixer channels, the whole chain can be dragged to the Browser to create a new FX Chain to use on other Events or tracks.

The Tail field adds time to the Event, to capture reverb and delay tails when you render Event FX. Note the Process Volume after the Event FX button to the left of the Tail legend. Best of all, once effects are rendered, they are unloaded, freeing up the power and resources they consume. Parameters of Event FX can be manipulated in real time by a controller through Control Link, just as can channel effects. Obviously, this only works when Event FX are running live; once they’ve been rendered, Studio One is simply playing back a file with effects baked in.

Event FX have numerous applications, both creative and corrective. The first thing that leaps to mind is putting effects on a single word or phrase for emphasis. Maybe you need a specific EQ setting to match the sound of an overdubbed phrase to the rest of the take, as previously suggested, or a reverb to match the ambience on a few touch–up fixes to a live recording.

First, create an effects setting that accomplishes what you want and save it as a preset or FX Chain. Now select each overdubbed Event in turn, drop the same effects in the Event FX area, load the preset you made, and render. In this way, Event FX can provide an alternative to automating effects. You save work in your mix and reduce the number of plug–ins needed for it.

As a final consideration, I pose this question: if you specify an Event volume, does it get computed before or after the effects chain? The results often can be quite different between the two. In most cases, the best results are achieved by computing volume after effects, but Studio One gives you a choice, with a button bearing the clever name Process Volume after Event FX, visible to the left of the Tail legend.

Event FX is clearly a superstar feature, but it is not the only Event–level mixing function in Studio One. There are a number of other interesting features, mostly providing real–time functions. 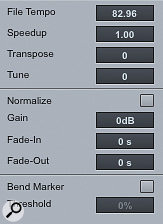 The Event Inspector contains a number of real–time Event–level processes.

Naturally, Event FX have their limitations. Even though you can control live Event FX using Control Link, it is not possible to automate Event FX. However, like a few other DAWs, Studio One can carry automation along when an Event is moved, allowing you to automate channel effects and have the automation be attached to the Event. The ‘Automation follows events’ tick box in Preferences / Options / Advanced /Automation enables this behaviour.

However, in an effects–automation scenario, Event FX is a way to audition effects on an Event without having to do bypass automation in the track, as well as to audition control using Control Link that you intend to automate. Here’s a workaround for automating Event FX:

I’ll admit, it’s a little clunky, but there you are. One last note: in spite of appearing in the Event inspector, Audio Bend markers are applied to an entire file, not just an Event. Strip Silence, on the other hand, can be applied at the Event level.

Event FX is a wonderful feature that can often obviate the need to automate effects. But Studio One offers a full palette of Event–level processing features beyond Event FX, and those should not be forgotten. Event–level processing gives you the same fine control over processing that Event fades and volume give you over gain at the Event level. You may quickly find it addictive!