The End Of Windows XP

The newly released Service Pack 3 will be the last one ever issued for Windows XP - and XP itself is due to go 'off the market' at the end of June. Are there any implications for the thousands of XP-using musicians out there?

As I write this, Microsoft are poised to unleash the long-awaited Windows XP Service Pack 3. It was released to manufacturing on April 21st and downloadable via Windows Update (windowsupdate.microsoft.com) and Download Center (www.microsoft.com/downloads) from April 29th. It is already downloadable from a few third-party sites, such as Major Geeks (www.majorgeeks.com/download4323.html). 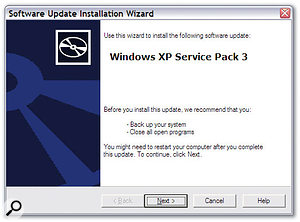 Service Pack 3 is an update for Windows XP Home, Professional, Tablet PC and Media Center Editions (but not Windows XP Professional x64), and at 316MB it will be a hefty download, so those with slower Internet connections will perhaps find it less stressful to wait for it to arrive on PC magazine freebie CD-ROMs.

While it does contain a few new minor features, it's essentially a collection of bug fixes released since SP2, and also includes all the hundreds of previously released updates, security improvements and hotfixes from Service Pack 2, so installing it ensures you have the very latest versions of every Windows XP system file. SP3 even removes some minor Windows XP features, such as the taskbar Address option. However, in a departure from previous policy, it doesn't contain any of the Service Pack 1 fixes, so you need to have already installed SP1.

None of the minor new features (Network Access Protection compatibility, the Kernel Mode Cryptographics Module, Black Hole router detection algorithm and Product Key-less install option) are likely to be of much interest to musicians, although some may find it helpful that the final item in that list lets you create a 'slipstream' Windows XP CD-ROM with Service Pack 3 included, which you can install without having to enter a product key, as you can with Vista. 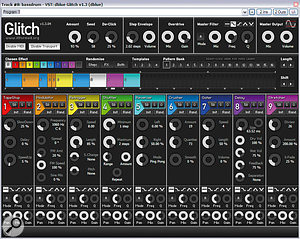 If you like dropping different effects in and out of a mix, Glitch is a wonderful tool for song creation and live performance.If you like sound-mangling plug-ins, they don't get much more creative than Kieran Foster's Glitch (http://illformed.org/blog/glitch). Originally developed to ease the creation of glitchy electronic beats, Glitch is a freeware, PC-only download that has evolved over several years into a comprehensive and versatile tool that can transform synths, audio tracks and loops in a host of ways, from subtle to extreme.

At its heart is a tempo-sync'ed step sequencer offering up to 64 steps, which lets you drag and drop any of the nine available effects at any point in the sequence, so you can program in different treatments for each phrase of your song, or even change them beat by beat. Available effects are TapeStop, Modulator, Retrigger, Shuffler, Reverser, Crusher, Gater, Delay and Stretcher, and you can place these anywhere into the sequence manually, let Glitch choose random effects for you, or use a combination of the two approaches. The random effect selections are determined from song position plus a seed value, so once you get an effect 'randomness' that suits your song, the same effects will play at the same point during each playback, making the results far more predictable and musical.

You hear the results in real time as you alter parameters, and can quickly transform a simple synthesized riff or vanilla drum-loop into an evolving tour de force. Glitch is also easy enough to use to be a great live performance tool, especially as it can replace a clutch of separate effect plug-ins that would otherwise require individual mute automation to drop in and out. The effect parameters can also be automated in your sequencer or mapped to MIDI hardware controllers via a MIDI learn function, for yet more sophistication.

Despite its long gestation period, Kieran still regards the current version of Glitch as a 'rough prototype', and is hoping that it will eventually evolve into a commercial product. However, even at this stage it's capable of some truly impressive results. This is a great tool for kick-starting new ideas, and good fun into the bargain!

What have interested many musicians are the claims that XP3 provides a significant performance boost. Indeed, with benchmarks showing that Windows XP SP3 runs Microsoft's Office suite 10 percent faster than the same machine running Windows XP SP2, some brave musicians installed the SP3 beta versions and have variously reported reduced booting and shutdown times, snappier opening of windows and files and improved speed of audio editing, and there have been comments such as 'runs noticeably better'. Unfortunately, other musicians who installed SP3 beta versions reported missing USB ports, system freezes and, in one case, not being able to boot into Windows at all after the update.

Of course, beta versions are released so that any remaining bugs can be found 'in the wild' and subsequently dealt with by the developer, so it's always safer to wait until the official release. Moreover, readers with long memories will remember that even the official release of Windows XP Service Pack 2 managed to nobble Firewire performance (requiring the subsequent fix available from http://support.microsoft.com/kb/...), as well as temporarily refusing to run Cakewalk's Sonar without a small Windows tweak to alter its DEP (Data Execution Prevention) status.

Fortunately, SP3 backs up all the files it's about to change, and you can un-install it if anything amiss happens. Nevertheless, if you intend to install SP3 on your music PC I'd recommend the additional precaution of first making a disk image file, so that if the update results in any problems you can restore the image file, to return your hard drive to exactly its previous state.

I downloaded SP3 early from Major Geeks so I could report back on my findings, and although the update takes a long time to work its way through all the system file changes, I experienced no problems during the procedure. Unfortunately, nor did I notice any improvement in booting or shutdown on my PC, or any change in audio performance (DAWbench provided the same results before and after the update, for instance).

However, I have experienced significantly faster Internet performance, with quicker opening of windows, and a consistently higher download speed. Before the update my downloads were lucky to achieve 85 percent 'Network Utilization', whereas they now manage up to 93 percent. I suspect we'll all have a slightly different experience, but hopefully a positive one.

In last month's PC Notes column I reported on the audio click/pop problems that some musicians had been having when using Gigabyte motherboards, which the handy DPC Latency Checker utility had shown to be linked to BIOS revisions: earlier versions didn't exhibit the problem, while more recent ones did. Views of my DPC on-line survey (www.soundonsound.com/forum/showflat.php?Cat=&amp;Number=588140) have now risen to over 9000 and lots more users of Gigabyte motherboards have posted their findings, showing that the problem seems to affect all the Gigabyte range having model designations starting with the 'GA' prefix, including the P35-DS3, P35C-DS3, P35-DS4, EP35-DS4, P35-S3G, P35-DQ6, X38-DQ6 and X48-DQ.

Gigabyte were initially reported as saying they had no plans to cure these spikes, but seem to have relented, because several Beta BIOS versions are now available for those having problems. For instance, BIOS F13b (the 'b' stands for beta) solves the DPC spike issues for GA-P35-DS4 owners on Windows XP (and, for some people, resolves most of the spikes when running Windows Vista too), while GA-P35C DS3R owners should download and run version F11b or F11f. Good news indeed!

The Demise Of XP

Microsoft have announced that Windows XP will be 'going off the market' on June 30th 2008, so Service Pack 3 is the final one that will ever be released for it. Given that such a small proportion of musicians have so far migrated to Vista, some are beginning to panic about what will happen after this date, and some DAW builders have been considering stockpiling XP licenses before the cutoff date, so they can still offer XP as a system option.

Well, although Microsoft will stop selling XP on June 30th, that doesn't mean you won't be able to buy additional copies elsewhere. A quick web search demonstrates that almost every Windows version is still available, including unused copies of Windows 95 that change hands on eBay for a few pounds. So although it's unlikely we'll be offered XP as an operating system option on new mainstream PCs from now on, I suspect we'll be able to buy it for some years to come. However, once freshly installed on a new PC, XP was also the first Microsoft operating system that required 'activation' to continue running after a grace period, so getting hold of additional copies isn't the only concern in the future. Fortunately, Microsoft will be carrying on with XP Product Activations until April 2014. If Vista or its successor haven't won over musicians by then, I suspect we'll all be running Macs anyway!

A couple of years ago AMD Athlon X2 processors became favourites with musicians, beause, despite a few compatibility issues, they offered better audio performance than Intel's Pentium D range for a similar outlay, as well as being easier to keep cool. Intel fought back with their Core 2 Duo range, which also offered significantly better performance, albeit at a higher price. 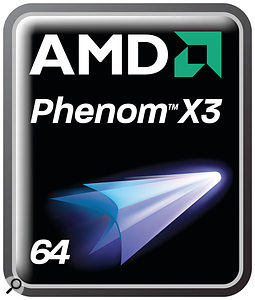 However, when Intel's Core 2 Quad models appeared some months later, AMD slipped further behind in the performance stakes, and even their subsequent Phenom X4 quad-core processor range didn't compete, in terms of performance. Nevertheless, the Phenom range remains attractive to anyone on a budget, especially since AMD generally make their newer processors compatible with existing motherboard chip sets via a free BIOS update, so that you can unplug your current CPU and plug in a faster replacement. Intel, on the other hand, nearly always couple new processors with new chip sets, forcing you to upgrade both motherboard and processor.

With the budget-conscious in mind, AMD have now released a range of tri-core Phenom X3 processors, which are essentially X4 processors with one core disabled, allowing AMD to salvage otherwise unusable CPUs and sell them at an even more competitive price. There are initially three models: the 8450 runs at 2.1GHz, the 8650 at 2.3GHz and the 8750 at 2.4GHz. The memory controller is slightly slower, but the X3s generate less heat than the X4s, so they can be cooled more easily and quietly. If you already have an Athlon 64 X2 and an AM2-format motherboard, a Phenom X3 should work in the same system after a BIOS update, making it a perfect replacement that offers significantly greater performance.

AMD are hoping the X3s tempt those currently considering a new PC based around an Intel dual-core CPU. After all, with most software three cores should provide 50 percent more performance than two running at the same clock speed. A few applications may have problems with three cores, not because there's anything inherently wrong with the concept, but because the software only checks for the more usual one, two, four, or eight cores. Hopefully, such issues should be speedily resolved by software developers.