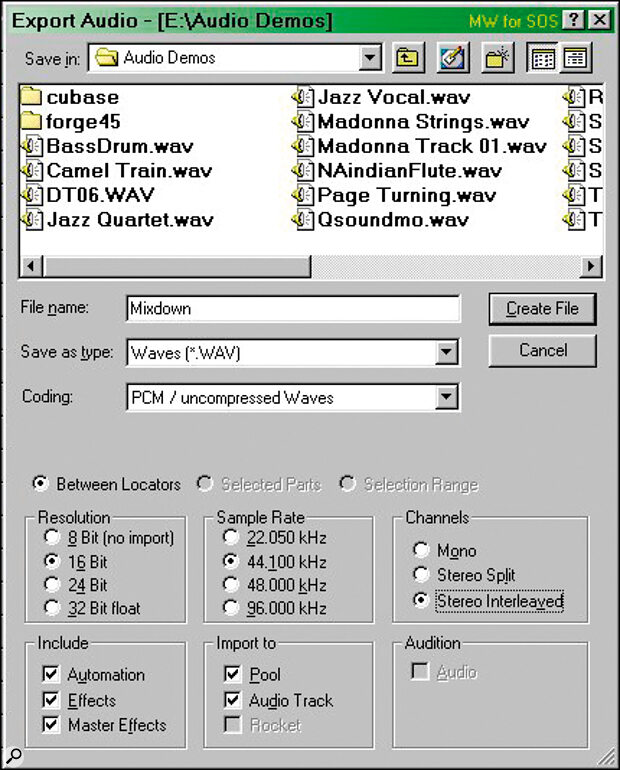 The Export Audio window may look simple, but there are lots of options to consider. These are the most suitable settings if you want to export a file for CD burning.

This month's crop of Cubase tips covers the multitude of options available when exporting audio, plus ways of incorporating external MIDI instruments and effects into your mix.

Many musicians are still unsure of the best way to create a final stereo file from their Cubase VST multitrack songs, whether for burning onto audio CD‑R, or coding into RealAudio or MP3 formats for placing on the Internet. With the latest version 5.0 it's possible to do all these things from within Cubase using the Export Audio function. When you use this, instead of Cubase creating a final mono or stereo mix in real time, as it normally does when you click on the Play button, it saves exactly the same data as a file onto your hard drive.

Once you have selected the most appropriate settings for your Export file, you simply choose a suitable folder and filename, and then click on the 'Create File' button. The export progresses at a rate determined by the processing power of your computer — with a powerful CPU it will happen much faster than in real time, while older computers may perform slower than real time. 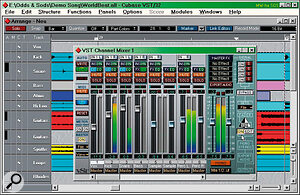 If you're exporting in a format containing 16 bits or fewer, you'll need to enable suitable dithering settings in the channel mixer.

The Export Audio function in latest versions of Cubase has many options. You can, for instance, optionally include any real‑time plug‑in Effects and Master Effects you have added to your song, as most people will want to do. You can also include Automation, as long as the Auto Read button has been activated in the VST Channel Mixer. 'Import To' lets you automatically import the final file into the Audio Pool, or straight into a fresh Audio Track, allowing you to audition the final result immediately.

The option that seems to cause most confusion is Resolution. All versions of Cubase 5.0 now support 24‑bit recording, while Cubase VST/32 also supports two additional Record Modes, 32‑bit and TrueTape 32‑bit (you can find an explanation of these in my review of Cubase 5.0 in SOS September 2000). Even if all of your individual tracks are all recorded at 16‑bit resolution, the combined mix and the bulk of your plug‑in effects will still be processed using the internal 32‑bit float format, so there are always 32 bits of data resolution available for export if required.

The final resolution for the Export Audio function depends on which of the four different 'Save As' types of file you choose: Waves, AIFF, RealAudio, or MPEG Layer 3. The simplest choice is RealAudio, since once you choose this most of the additional options are greyed out, and resolution is automatically determined by your choice in the Coding box. My PC displayed 17 options here, ranging from '6.5Kbps Voice' through to '32Kbps Music Stereo'. There weren't any RealMedia G2 options available, which is a shame, since these sound considerably better.

If you instead choose MP3 coding, the Resolution can either be 16‑bit or 24‑bit (with 16‑bit being the usual option), while the available bit‑rate options will depend on which sample rate you choose for your export file. With a choice of 22.05kHz the maximum MP3 bit‑rate is 80kbit/s, while for sample rates of 44.1 or 48kHz the bit‑rate options extend to 320kbit/s. With MP3 you can also select either Mono or Stereo Interleaved output (this choice is made automatically depending on the coding option with RealAudio). Normally, you'll opt for a 44.1kHz sample rate and the Stereo Interleaved option, to choose the almost universally used MP3 bit‑rate setting of '128kBits/s; 44.100kHz; Stereo'.

To Dither Or Not To Dither?

If you are saving in either AIFF or uncompressed WAV formats you'll get the full range of options, and here your choice of resolution will be determined by what you are going to do with the exported file. If you have already added what global effects you need using the VST Master Effects, you can export at your desired final resolution.

If you're exporting at a final resolution lower than 32‑bit, it's important to correctly dither the file to make the most of its original resolution, whether the final format is CD audio, RealAudio, or MP3. Dithering is activated by clicking on the appropriate button in the VST Master Mixer, and then choosing a suitable Type for dither, and in the case of Cubase VST and Score, suitable noise‑shaping and dither bits settings as well. All Cubase VST 5.0 versions other than Cubase VST/32 give you the option of dithering down to 8, 16, or 24 bits from the internal 32‑bit float format, while Cubase VST/32 incorporates the Apogee UV22 algorithm, which is optimised for 16‑bit only.

However, if you're going to subsequently load the exported file into a stereo mastering application for further editing then you should leave the mixdown file in the highest bit resolution available — 24‑bit, or in the case of VST/32, 32‑bit float, as long as your mastering application supports this — and add dither only after all the editing and mastering processing has been carried out.

Having explored the main Export options, it's time to decide what parts of your song are to be included. The default is the 'Between Locators' mode, which means that what you hear when you play back the song is what gets exported. The only exceptions are any parts or tracks that are muted. If you want to export alternative mixes, you could create several different arrangements of certain tracks, and then mute them alternately. If you gather the tracks required for each alternate version of the mix into separate Folder tracks, it will make the process easier.

If you want to create extended or shortened versions of the mix, another approach is to zoom right out until you can see the entire song, select it all, and then copy it to several locations beyond the end of the original song. It only takes a few seconds, but allows you to perfect several completely different mixes one after the other, and then export them individually by moving the locators. You'll probably find this safer than creating several Arrange pages, since it's impossible for the mixes to get separated or confused, and of course you can use the Marker track to label them up.

The 'Selection Range' mode is very similar to 'Between Locators', except that it's designed for use with the Selection Range tool so that you can grab any or all of your song for export without bothering to set the locators. Once again, muted parts or tracks don't get included, but this mode also gives you the option of excluding tracks even if they're not muted — just draw a box around the ones you want to export.

As soon as you select any song parts, the third 'Selected Parts' mode will no longer be greyed out in the Export Audio window, and you can use this to create a separate file for each selected part. If you also tick the Import to Pool and Audio Track options, this mode is an ideal way to 'print' an audio track complete with its effects and automation once you're happy with it. You can then mute the original and use the released processing power to add more effects to other tracks. The beauty of this technique is that you still have the original tracks available for further tweaking if you later change your mind about them. Martin Walker

Including MIDI In The Mixdown

Although VST Instruments are driven by MIDI data, their output appears as audio, and will therefore be automatically included in the final Export file. Stand‑alone soft synths will probably have a 'Capture to File' option allowing you to create a file that can subsequently be Imported into your Audio Pool as an audio track. However, any external MIDI synths that you use will also need their contribution converting to audio tracks before they can be incorporated into the final mix.

To do this, just route the synth outputs to your soundcard input and switch to Record mode — as the MIDI tracks play back, the synth outputs will get recorded as an audio file in perfect sync, either mono or stereo as required. If you want to add audio plug‑in effects to certain MIDI synth tracks, simply record these into your Song as separate audio tracks by muting all but the required MIDI track in Cubase before starting to record. Martin Walker

Loose MIDI timing is a common complaint with all Mac and PC‑based sequencers, but many new Cubase users find that the timing of the audio tracks in their mixes also becomes sloppier and sloppier as they add more VST Insert effects to different channels and groups. The bundled dynamics in current versions of Cubase are a particularly bad culprit — simply compressing a snare drum can make it noticeably late with respect to the rest of the tracks. This phenomenon occurs because audio effect processes take time to compute, meaning that processed tracks arrive at Cubase's audio output slightly later than audio which is not passing through any insert effects. Fortunately, there is a simple way to solve the problem. In the Audio Setup page (accessible via the Options menu) is a tick box labelled 'Plug‑In Delay Compensation'. Ticking this causes the program to delay all the unprocessed audio by an appropriate amount, ensuring that processed and unprocessed audio remain in sync. Sam Inglis

There are several ways to do this, but I find the easiest is simply to draw the desired value into the Controller Display of the Key Editor using the pencil tool. Make sure you leave a short pause after changing the patch to let it 'settle' before playing any notes, or you may get strange noises in the changeover. However, if you're careful you can even automate your external effect settings during the song. Martin Walker