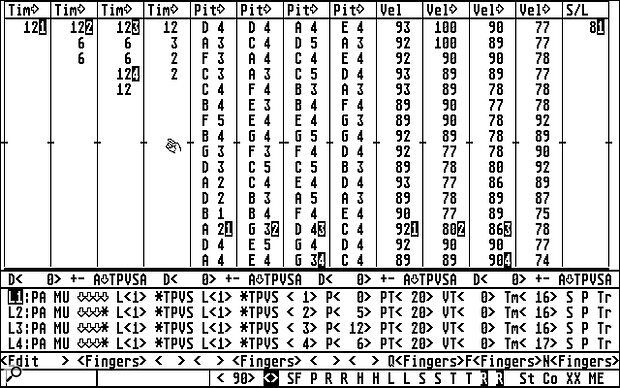 Derek Johnson experiences the weirdness that is Dr T's, in the shape of MIDI‑Ax, and helps out a reader who wants to use his Atari as a dedicated TX7 editor.

Back when the Atari was commercially the number one platform for MIDI music‑making, there were many successful software houses feeding the market. One of the top names was Dr T's Music Software, and although the company no longer exists, their software remains popular amongst current Atari music users thanks to the free, authorised availability of a number of their previously commercial products. It's currently possible to download a range of the company's synth editors, and the fabulous KCS Omega sequencer.

Yamaha's TX7: a powerful FM synth whose capabilities can be fully exploited if you assign your Atari to software editing duties.

But even the most ardent Dr T's fan is unlikely to have encountered the package we're having a brief look at this month: MIDI‑Ax was developed by Emile Tobenfeld — Dr T himself — for his own use. The program is a mixture of mouse‑based MIDI controller and real‑time algorithmic composition aid, almost a souped‑up version of Dr T's old Fingers program; in fact, MIDI‑Ax's main operating screen looks a lot like that of Fingers. Most of the main operating screen is divided into a 13‑ or 16‑column grid, which the user configures to generate data related to pitch, time, velocity and staccato/legato response. The bottom quarter of the screen is devoted to the four playback parts that generate the finished performance: each part can be assigned a MIDI channel, Program Change number, transposition, and a link to other parts. Interestingly, it's also possible to give the part a temporal offset so that it effectively plays back at a different rate from the master tempo, for true polyrhythmic effects.

The data in the upper columns interacts with the parameters set in the bottom quarter; user interaction with these parameters then contributes to the finished performance. Such user interaction can come from mouse control, Atari keyboard input, MIDI controllers, or a compatible sequencer. MIDI‑Ax integrates with Dr T's Multi Program Environment, and thus can record its performance to a sequencer such as KCS Omega, as well as interacting with sequences already in KCS. It appears that getting a MIDI‑Ax performance into your favourite sequencer would involve recording it into KCS and saving the result as a MIDI File.

Be warned right now that MIDI‑Ax's screen is in no way graphic, being dizzyingly full of numbers, abbreviations and arrows for the user to click on. This functional, non‑graphic approach to program design was a Dr T's trademark. (Look to the lower right of the screen and you'll find that 'St' starts the program, 'XX' stops it, 'Co' continues and 'Me' accesses the menu.) A certain amount of help is provided by the documents that come with the program, but users will still have to be prepared for experimentation and poking around as they become accustomed to it. And though MIDI‑Ax is graphically spartan, there is a certain fascination to be had from the on‑screen action as numbered cursors for the four parts move up and down the data columns.

Getting to grips with MIDI‑Ax requires some of the concentration of learning a real instrument, or working with mouse‑controlled software such as Laurie Spiegel's Music Mouse. There isn't room in a column of this size to do such a complex program justice. If algorithmic music tools are your bag, this is a good one which will reward your perseverance.

MIDI‑Ax is available for download from the Atari‑MIDI group on Yahoo, but isn't, for once, free: if you download the software, like it and use it, you're asked to buy an experimental video from Emile Tobenfeld's current company — videoware, perhaps? Non‑North American readers should bear in mind that the tapes are NTSC format, though most modern VCRs should be able to play them. You can get a good idea of what the Doctor has been up to by visiting www.foryourhead.com.

Reader Chris Bond contacted the column recently asking for help in his search for an editor for his Yamaha TX7. He has a demo version of a package called DXpert/DXorganiser from Five Pin Din Software, which offers librarian functions in demo form, but he would like to get something that would allow him to use his Atari as a full‑time TX7 editor alongside his Mac — an ideal job for a spare Atari. To the best of my knowledge, Five Pin Din are no more, so getting a full version of their software would involve placing 'Wanted' ads and asking around Atari news groups. The same goes for some other older software, such as Steinberg's Synthworks DX/TX, or C‑Lab's X‑Alyser. But there are alternatives.

Yamaha's six‑operator FM synths were never as well‑served with public domain and shareware editors as their four‑op cousins, but there is a small amount of choice. The first one to go for is probably the recently liberated Caged Artists DX Heaven DX/TX editor/librarian, which was once marketed by Dr T's. This is also available in a version compatible with Dr T's Multi Program Environment, which allows multiple editors to be used alongside Dr T's KCS sequencing system. Get it from the indefatigable Tim Conrardy's web page (sites.netscape.net/timconrardy/timidi.htm). Between this and groups.yahoo.com/group/atari‑midi, you'll be able to download more DX7 tools and sounds. Another possible option, which I've just heard about, is Jim Patchell's TX816 Editor. This is something that Jim wrote for his own use, to let him edit Yamaha's TX816 mainframe system (the rack accommodates up to eight modules, each equivalent to one DX7). I don't have a six‑op synth, and Jim doesn't have a DX7, so although this editor might work with DX7/TX7, we're unable to confirm it. But as it's a free download from from Jim's Synthesizer DIY page, at www.silcom.com/~patchell/, why not give it a go?