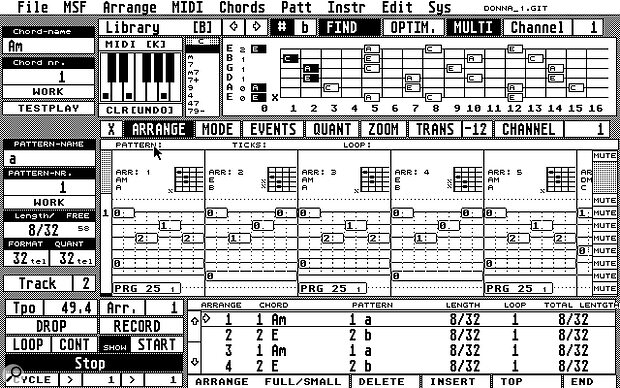 The useful range of Atari software from Cadenza includes the Web Wizard web site creation tool, and is now free.

Denizens of the Atari demi‑monde will be aware that Matthew Bacon, one of the team behind the MyAtari on‑line magazine, also used to run Cadenza Software. Under this brand, Matthew released many useful programs and utilities for the Atari, plus a big collection of HiSoft Basic source code. The bad news is that Cadenza was closed earlier this year. And regular readers will know what the good news is... Matthew has released his entire back catalogue as downloadable freeware.

Get In On The Act

Of immediate interest to readers of this column would be ACT (Algorithmic Compositional Tool). Matthew initially wrote this program as part of his dissertation during his final year at university; it generates random musical output, based on user‑defined notes, which can be controlled in real time using a GEM interface or a MIDI source. Though rather simple — ACT only works on one MIDI channel — there are some nice touches in the way the 'algorithm' can be tweaked. And being able to output a MIDI File of an iteration is always a bonus.

The other choice freebie from Cadenza's range is Web Wizard, which this column last examined back in May 1999. Simply put, WW is a suite of three programs that lets you create and maintain web pages using your Atari, and requires no knowledge of HTML. The 'wizard' part of the program does the hard work for you. On‑line help is provided, and the package is rounded out by a collection of copyright‑free images, an 'A‑to‑Z' of HTML 3.2 commands, an HTML stripper/link checker, and an easy‑to‑follow beginner's HTML tutorial series.

Other titles from the 15‑strong Cadenza list include: Atari Personal Organiser, a combination of diary, notepad, calculator, clock and address book; Calc IT, a simple calculator DA; CD Player, which, not surprisingly, lets you use an attached CD drive to play audio CDs; Password, an Auto folder program which requires a password to boot your machine; and TicTacToe, which the sadly defunct Floppyshop PDL called "perhaps the best game of noughts and crosses you'll ever play." Can't say fairer than that!

We'll now carry on where we left off last month, discussing Johanna Bindgen's music freeware for the Atari. One of the packages mentioned, the MIDI Player ST MIDI File player, was updated just after we went to press, resulting in some minor changes. For example, the program is controlled almost entirely by key commands, and some of those commands have been modified in the new version. In addition, the handling of MIDI channel, program change number and volume value have been rationalised. A help text document is also included in the zip file for the program. Otherwise, the software remains a handy tool that turns a monitor‑free Atari into a comprehensive MIDI File player for live or studio situations.

And finally, EasySequenzer ST. If you joined us for last month's episode, you'll know that the author runs a music school, and EasySequenzer ST was created to give some of her young students their first experiences with MIDI and "pop song" creation. This unfussy program has all the basic recording and editing tools you'd need in a 16‑track sequencer, and makes light work of creating and rearranging a song. There's no help file as such, but all functions flash up on the top line of the display as your mouse moves over on‑screen elements.

As mentioned last month, MyAtari, the on‑line mag for all matters Atari, has reached its first birthday with its October issue. Well done! Of interest to musical Atari users is a piece on Hybrid Arts' Ludwig interactive composition aid. The most unusual feature is the Spot the Hard Drive competition: an Atari event recently occurred at Lengenfeld, Germany (the Unconventional Party 2001, www.unconventional.atari.org), and visitors apparently took part in a hard‑drive chucking contest. MyAtari have doctored a few photos: use your skill and judgement to decide where the hard drive might be!

One wouldn't have expected fallout from September 11's tragic events to land in this column. However, Emile Tobenfeld — the Dr T behind much legendary Atari music software — has been photographing the twin towers of the World Trade Centre for quite a few years. We mention this because the good Doctor has placed a selection of photographs on his web site, as a sort of memorial to the towers' destruction (a "visual wake", he calls it).

There are strange and beautiful images here, made all the more poignant because their subject no longer exists.