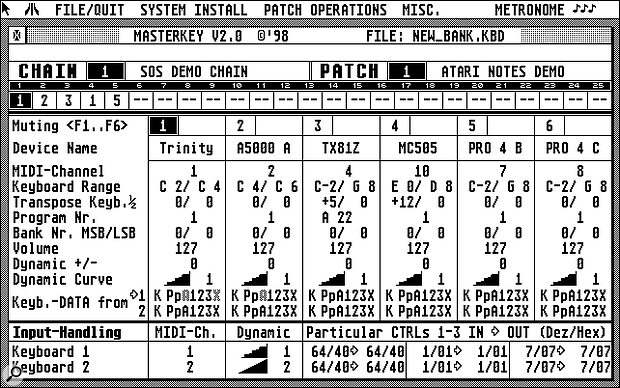 This is the main window of MasterKEY, showing six instruments being split and layered, each with their own MIDI channel, key range and Program Change number.

You can add sophisticated MIDI mapping facilities to your Atari‑based studio for next to nothing with some useful German shareware, as Derek Johnson explains.

This month I'm giving some space to a useful piece of shareware that's not an algorithmic composer, an arpeggiator, or an analogue‑style sequencer — all items that Atari users are pretty well sorted for! MasterKEY is a recent development for the Atari from German coder Thomas Tegeler, and it offers quite sophisticated MIDI mapping facilities. If you're using a synthesizer that's a bit dim when it comes to multi‑zone master‑keyboard facilities, and would like to have such facilities, this is the software for you. The latest release, v2, is dated 1998, and the docs are dated July of this year. It seldom gets more contemporary than this in the modern Atari world!

In essence, MasterKEY provides comprehensive control of where incoming MIDI data is sent, via a maximum of six zones. It can even accommodate MIDI data coming from two MIDI channels, if for example, you have two keyboards interfaced with your Atari via a MIDI Merge box. Each zone can be defined in terms of a 'Device' (one of a choice of 16 destination MIDI instrument/MIDI channel combinations), keyboard range, transposition (up to four octaves in semitone or octave steps), Program Change (with Bank Select, if desired) and volume. Though velocity ranges aren't explicitly offered, a range of 'dynamic offset' parameters determine how a zone will respond to incoming velocity. There is also a certain amount of control over the filtering and transformation of incoming MIDI controllers, such as pitch‑bend, aftertouch, and so on.

Your custom set of zone parameters is stored as a Patch, of which there are up to 100 within the program; you can save these to disk as a bank. It's possible to chain Patches — a chain has 25 steps — so that you could move through different zone setups for different songs in a live set, for example. Steps are selected with a Program Change, mouse click, or via the computer keyboard. Other remote control facilities include zone mute, and a useful 'Panic' button (great for cutting off hanging notes and solving other minor MIDI problems).

A Patch can also generate a user‑definable System Exclusive sequence when it's selected, to a maximum of about 100 bytes. This would allow you to tweak SysEx‑enabled parameters and switches — you could, for example, tell a compatible synth to enter General MIDI, GS or XG mode. The count‑in metronome seems a good idea but is a little undeveloped. When enabled, it plays a click over MIDI or via the Atari monitor speaker (between 40 and 200bpm), and flashes the monitor display in time to the click, but it stops when you start playing. It also doesn't appear to transmit MIDI Clock, so can't be used as a master clock in a larger system.

There are limits to what MasterKEY can do, mainly due to the Atari only having one MIDI Out. However, given a little pre‑planning with regard to multitimbral setups on the target synths, the program provides a satisfying amount of control. MasterKEY runs fine on a hi‑res ST, and though Tim Conrardy (of Tim's MIDI Atari World web site and the Atari MIDI group at Yahoo) reports that it works on his TT, he's found that Falcon performance is erratic: the best you can hope for is screen redraw problems in Falcon 16‑colour hi‑res mode.

The program is in English, and there is a quick‑start document in English that summarises all major functions, but the detailed manual is a German‑language PDF file. As this column goes to press, I've heard that MasterKey's author is working on an English translation of the manual, which is great news. I'll let you know when it becomes available. Fortunately the program is, for the most part, quite clear, given a bit of clicking and trying. There are some nice graphic elements, notably the displays for customising dynamic curves, and good integration of mouse, computer keyboard and MIDI keyboard as input devices, such as when setting up keyboard ranges for each zone.

All in all, MasterKEY is a handy program to have around if you'd like to access multiple synths, layered and/or key‑split, in a single performance as if they were one giant instrument.

Fun In The Waves

While doing my usual trawl through cyberspace for Atari snippets, I came across something for owners of Kawai's pioneering K5 additive synth (reviewed in SOS back in December 1987). Leslie Sanford's K5 Wavemaker, according to its author, creates harmonic spectra for the K5 synth by using one of seven different methods. Waves on offer include saw, pulse, triangle, saw + pulse, pluck, electric guitar and FM synthesis. The last option provides a choice of seven‑DX style algorithms, with user control over carrier and modulation frequencies and output level. The program is easy to use — simply punch in numbers when asked to do so, and the desired waveform is computed and automatically sent to the synth. A simple audition system lets you play the K5 from the Atari keyboard. K5 Wavemaker is downloadable from a rather useful K5/K5M resource page, which can be accessed via the unwieldy URL listed at the end of this box.

At the risk of mentioning Neil Wakeling's fab Pulsar 3‑part analogue‑style step sequencer just one too many times, I'd like to note that the beta version currently circulating is now up to v2. Neil's still tweaking away, and would appreciate any comments on his latest efforts.