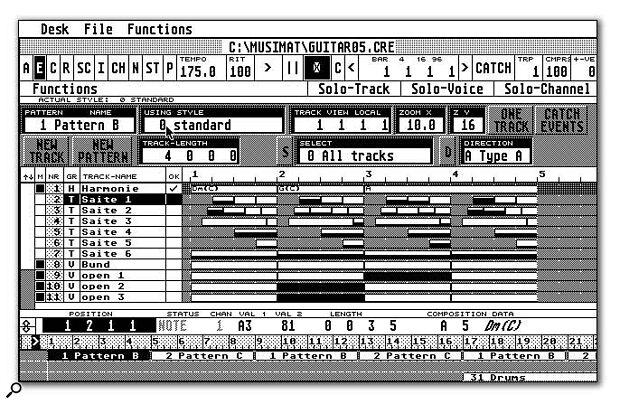 With software from an independent German writer, your Atari could make music like Mozart, or just play back MIDI files for you...

A violinist who runs a north German music school and youth orchestra might not be the first person you'd expect to be writing Atari music software. But when she has a long‑standing dream of a computer program that could create music like that of Bach, Mozart or Schönberg, it becomes more understandable. Johanna Bindgen taught herself to program, ended up with an Atari ST and, over a period of time, developed a program which became Simon ST. Recently released as freeware, Simon ST initially seems like just another algorithmic composer; however, it has a very different approach to other such packages.

Not So Simple Simon

This is a very personal, idiosyncratic piece of software, showing the results of years of polishing in its streamlined, sophisticated user interface. Moving the mouse around the screen causes the name of significant functions and window buttons to flash in the upper display (sometimes in German), and the displays themselves are well‑designed. What soon becomes apparent is that there is no way to input note data directly via MIDI, or import it from elsewhere. The reason for this is that because the author found that every attempt to code an algorithm produced a result that was too inflexible, she took the deliberate step of creating a sort of musical programming language.

The heart of Simon ST is the 'interpreter/compiler' list, into which the user keys the commands used by the program to generate the notes and other data that are processed in the creation of a performance. This is potentially very powerful, but presents a challenge to the user more familiar with more mundane MIDI software. Simon ST is made even more challenging by its current lack of documentation, which makes it difficult to find out what commands and potential variables are available. There is help on the commands front: the interpreter/compiler window has a useful 'token list' button, which pops up a list of available commands, and allows you to automatically insert them where required. Documentation is on its way, but for now one will have to access the tutorials, listings and hints that are knocking about on both the author's web site, and the Simon ST page at Tim's Atari MIDI World (tamw.atari‑users.net). Disassembling existing work is the only way to get an idea of what's going on.

Beyond the functions I've just touched upon, the software offers plenty of top‑level manipulation tools, including pattern‑based arrangement, an event editor, control over harmony and scale type, randomisation functions, real‑time manipulation via key commands, MIDI clock support and MIDI File export. Johanna's own examples of Simon ST in action are tantalising tastes of what is possible with this software. I won't pretend to have got to the bottom of this program, and will conclude with: "watch this space."

The Player's the Thing

Johanna has also written an elegant MIDI File player, called simply MIDI Player ST. She uses the software to supply piano parts at solo concerts at her music school, but it could be used by anybody needing a straightforward file player. The interface is text‑based, with a comprehensive, multi‑page help system. This lists all the keyboard commands required to drive the software — the mouse isn't needed. Pressing the 'Help' button cycles through the pages, which can be printed out, if desired. With MIDI Player ST, it's possible to load files, change tempo, alter volume and velocity response, edit data in the file to a limited extent (and save the result), and much more.

Especially useful is the ability to run MIDI Player ST without a monitor, an attractive option in a live situation. To this end, chuck the program into the Auto folder of your boot disk (just create a folder and label it 'Auto'), make sure your required MIDI Files are at the top level of the same disk, and power up. (It'll auto‑boot.) There's no playlist as such, but up to 80 MIDI Files are arranged alphabetically. The first 10 files can be loaded via the ST's function keys; if you need more, with care it's possible to use the normal load method (press 'F', for File, key in the required file number, and hit enter). Little jingles alert you to a successful load, which is useful since it can take a few seconds for a busy file to be prepared for playback.

In all, MIDI Player ST is a useful, well‑designed tool. Note that both Johanna's programs are reported to work well on the Steem PC‑based ST emulator (www.blimey.strayduck.com).

Regular column readers should be rather familiar with Tim's Atari MIDI World, the web site run by the redoubtable Tim Conrardy — it's the central location for much interesting Atari music software. Anyhow, TAMW's moved: space has been made available at the server of the appropriately‑named Atari‑Users.net.

The September issue of MyAtari magazine has just gone on‑line (at the time of writing), featuring Tim Conrardy's discussion of Gareth Jones's Schönberg 12‑tone algorithmic composition tool (which we examined back in August/September '97), plus one potentially interesting piece that I'm unqualified to comment on, not being a PC user. This concerns the running of Atari MIDI software on the PC, via the Steem emulator — alongside PC‑native MIDI software on the same computer. And doesn't time fly... MyAtari celebrates its first anniversary with the next issue.