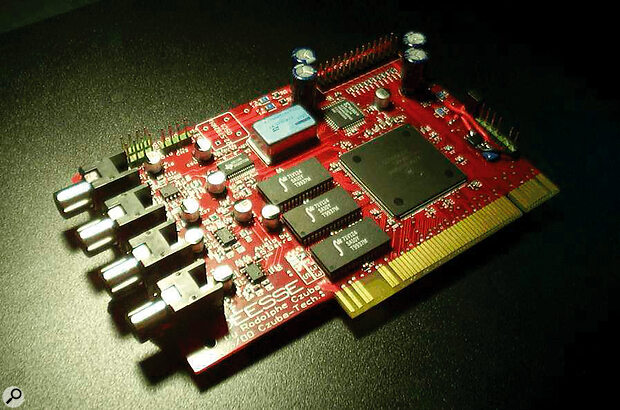 In the flesh: the Frontier Designs Déesse PCI DSP card for Falcon and Falcon clones.

Various companies are still putting development time and effort into creating 21st‑century computers and add‑ons based around the Atari operating system. Derek Johnson rounds up the breaking news.

It's been a while since I heard of any new developments in the TOS clone or accelerator/enhancer board market. Centek's Phénix TOS‑compatible work was followed in this column, but unfortunately that project ground to a halt. This month, however, we have a few new strands to bring together. 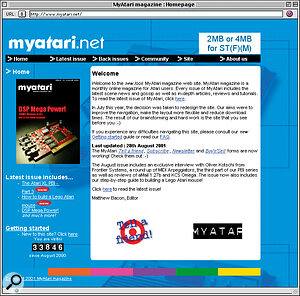 First of all, Frontier Designs are working on a new DSP card that goes by the name of Déesse (French for Goddess). Rodolphe Czuba, who also did some work on Phénix, started development of Déesse, but then passed it on to Frontier. This PCI card started life as an add‑on for the now‑cancelled Milan 2 TOS‑compatible computer, but Frontier have plans to make Déesse as widely applicable as possible amongst the Atari community: support for Falcon, the Medusa Hades and the original Milan should be forthcoming, and there's a possibility of persuading the card to work with Apple‑ and PC‑based emulators. Of course, original Falcons don't have a PCI slot, but the MkX version has room inside for both Istari's Eclipse PCI adaptor card and a Déesse. (Eclipse is distributed in the UK by Cortex Design, +44 (0)121 693 6669, www.cortex‑design.free4all.co.uk). In fact, there are plans to bundle Déesse with Eclipse.

The card is based around a Motorola DSP56031, which is not only fast but has the advantage of being somewhat compatible with the Falcon's original DSP chip, thus making it relatively easy to adapt existing software to the new card. Though the card will have attractions for those interested in working with audio in a TOS environment, it enhances general multimedia use of Falcons and their derivatives, handling graphics and Internet applications, for example, in a manner more akin to the way PCs and Macs do. On the hardware front, Déesse offers stereo analogue ins and outs, but a DSP Link will allow alternative I/O to be retrofitted. Plans are in place for optional stereo and multi‑channel digital I/O to take advantage of this link. The card will be able to handle up to 24‑bit digital audio and sampling frequencies up to 96kHz.

Pricing is understandably up in the air at present, though Frontier are taking orders. As I write, it looks as if it may cost around DM330, or DM400 with a software bundle on CD (that's around £110 or £134), but these figures are far from firm.

On their web site, Frontier mention that one of their concerns is to ensure Déesse is compatible with something called 'xTOS' — which takes us into the shadowy world of prospective TOS‑compatible computer development. Visit www.xtos.de and you'll read tantalising news of a 21st‑century extension of the Atari platform. Details are thin on the ground, but it seems that Medusa, the Swiss company behind TOS clone Hades, is also behind xTOS. Plans to base a new xTOS machine around Motorola's ColdFire V4e processor, however, could result in quite a long lead time, since Motorola themselves apparently don't see processors becoming available until the middle of next year. Still, the xTOS development team continue their work, and the Internet is a good way of keeping tabs on it. German Atari magazine ATOS (Around the Operating System!) has an interview with xTOS's Ulrich Gössel at www.mindrup.de/atos/news/news200...‑02.html; it's in German, but if your French is less rusty, a French translation can be found at coldfire.online.fr/interview.htm.

The CT60 is based around a 68060 or 68EC060 processor, running at 64MHz or faster (maximum 80MHz), but for the sake of some software which may not work in 060 mode, the accelerator allows switching between 060 and Falcon 030 modes. It should easily fit into an original Falcon case, without soldering (although a new, inexpensive, PSU is needed, to provide the correct voltage for computer and card). A buss slot on the CT60 will allow daughterboards to be added later; the first to become available will be a PCI adaptor.

Last issue I talked about Thomas Tegeler's MasterKEY, an interesting MIDI‑controller application. At the time an English manual for this 25Euro/US$22 shareware was in the works: it's now finished, and available as PDF file to all who want it. And anticipating the immediate query of those whose sole computer is an Atari or Falcon, I don't know of a dedicated PDF reader for TOS computers! Rumours of such an application being developed do occasionally surface; the latest rumour seems to have some basis in fact, so watch this space for news.

One interesting section of the manual details a method (untested by me) for making a switch box that connects to the Atari's joystick, to provide a certain amount of control over MasterKEY, via 12 buttons.

Read All About it!

On‑line Atari magazine MyAtari is managing to keep to a regular schedule, update issues and give their look a bit of a freshen‑up. The redesigned site was launched with the August issue (the latest as I write). Worth a look is Tim Conrardy's run‑down of MIDI arpeggiators, and Shiuming Lai's interview with Frontier Systems' Oliver Kotschi regarding the Déesse DSP project mentioned elsewhere in this month's column. And if you want another opinion of Dr T's KCS Omega super MIDI sequencer, there's a review by one Ross MacIver.