Despite offering powerful new features and an innovative design, Apple's new MacBook and MacBook Pro could pose problems for musicians dependent on Firewire audio interfaces. We consider the good, the bad, and the incompatible. 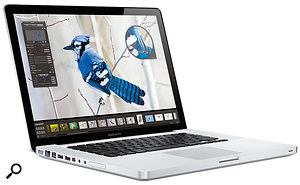 According to the date on the cover of the magazine you're reading, it's a new year, and there's also a new line‑up of laptops from Apple, bringing 2008 — a year that started with new laptop technology in the form of the MacBook Air — full circle. In addition to announcing minor improvements to the 17‑inch MacBook Pro and MacBook Air, Steve Jobs took the stage at a recent Apple special event to introduce brand‑new models of both the 15‑inch MacBook Pro and the MacBook.

The new MacBook Pro represents the first major design shift for the company's professional line of laptops in five years, and during the presentation Jobs invited Jonathan Ives, Apple's celebrated Senior Vice President of Industrial Design, to discuss the new approach. Ives teased the audience by commenting that "for years we've been looking for a better way of building a notebook, and we think we've found it."

With the previous laptops Apple have manufactured from aluminium, they would start with multiple parts to make the internal structure, which keeps the various components of the system in place, and then wrap this in a thin layer of aluminium. For Apple's new laptop design, however, the company's engineers devised a way of manufacturing the product from a single block of aluminium, where the internal structure is essentially carved out by a machining process. According to Ives, the resulting enclosure, which Apple are calling a 'unibody' enclosure, not only makes it possible to create a lighter and stronger part, but the scraps of aluminium left over are easily recycled, making the process environmentally friendly.

When you see the new 15-inch MacBook Pro, the result is an impressively slick and stylish appearance; but perhaps the best quality will be evident to any owner of an older aluminium‑based Apple laptop. I'm sure I'm not the only one to have accidentally dropped such a prized possession, only to find odd parts of the metal skin protruding in a most unseemly fashion, so I'm grateful that such deformation will no longer be an issue.

The screen has also been redesigned, incorporating a new magnetic latch, and follows the same aluminium‑plus‑glass approach originally introduced with the current iMac incarnation. The glossy 15.4‑inch LED panel looks vibrant behind its glass enclosure, set against a black border that effortlessly disguises the built‑in iSight camera. But while the screen does indeed look nice, I do think it's a shame that the new design doesn't accommodate the option of a matte‑finish screen, since I personally find the reflective nature of glossy screens distracting. And while I'm making minor criticisms, it's also possibly a shame that the resolution has remained the same, at 1440x900 pixels, since competing products of a similar size often offer more.

Another significant point in the design of the new enclosure is that the built‑in drive has finally become easily accessible. The battery and drive are now located behind a removable panel on the underside of the laptop, which is a big improvement; and because the battery is now concealed, the battery‑life indicator has been moved to the left‑hand edge of the laptop. However, if you're worried that this would make it easier for other people to get at the hard drive as well — which it would, of course — securing the laptop with a Kensington lock prevents the door‑removal lever from functioning.

When it comes to pointing devices, Apple have always had something against buttons. After being known for years as having the computer with a mouse offering only one button, Apple finally did away with a discrete button altogether when the Mighty Mouse was introduced a few years ago, turning the entire mouse into a button. Now they've done the same with the trackpad, and the new MacBook Pro features a glass‑finished, multi‑touch trackpad where the whole surface is a button.

While the notion of the trackpad being the button might be perceived as a little peculiar, when I tried out a new MacBook Pro for myself, initially I forgot that the trackpad had changed at all. If you're used to employing a 'thumb and forefinger' approach, where the thumb presses 'the button,' you can easily use the new trackpad without having to retrain your muscle memory. This is partly, I think, due to the fact that pressing the trackpad near the top feels slightly stiffer than towards the bottom, and it seems as though the button's mechanism is deliberately angled accordingly. 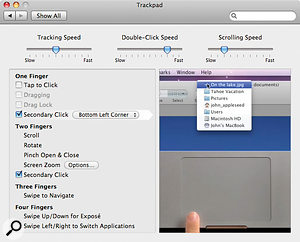 The Trackpad System Preferences page enables you to configure the behaviour of the trackpad, and observe how the various two‑, three‑ and four‑finger gestures are performed. Since the whole surface is now a button, you can set the bottom corners of the trackpad to perform a secondary click if you press in that area.In addition to the two‑ and three‑finger gestures that have been featured with Apple's recent trackpads, the new trackpad also supports four‑finger gestures, where the defaults allow you to switch applications by swiping horizontally, or swiping vertically to work with Exposé and Dashboard. I remain a little sceptical about the usefulness of an increasing number of trackpad gestures, as I'm sure there's a threshold at which the time it takes to recall a given gesture for performing a task surpasses the time needed to use the keyboard or mouse!

Although we've been discussing the MacBook Pro, perhaps one of the most surprising announcements Jobs had up his sleeve was that a new MacBook would share the design of the new MacBook Pro. So aside from being based around a 13-3-inch screen, the MacBook boasts all the same design features as the Pro.

It's What's On The Inside

So yes, the new MacBook Pro and MacBook look stunning, but it's what's on the inside that counts. Speaking of counting, the MacBook Pro is offered in models featuring either a 2.4 or 2.53 GHz Intel Core 2 Duo processor, with a 3MB Level‑2 cache on a 1066MHz front‑side buss, and a 2.8GHz chip is also available as a build‑to‑order option. The MacBook's Core 2 Duo shares the same basic properties, but comes with speeds of either 2.0 or 2.4 GHz.

Perhaps the most interesting hardware change, though, is that from an Intel chip set to one developed by Nvidia, featuring an integrated 9400M graphics processor with 256MB of video memory shared with the system's main memory. The 9400M is a significant improvement over the integrated graphics chip from Intel used on the original MacBooks, and Apple claim that you get up to five times the performance, although this seems to be more in relation to 3D graphic performance than general‑purpose apps.

In terms of connectivity, there's alarming news for musicians dependent on Firewire devices, since the MacBook Pro no longer has a FireWire 400 port, offering just a single 800 interface, and the new MacBook, like the MacBook Air, offers no FireWire port at all. This isn't a big deal for MacBook Pro users, as the 400 and 800 ports usually shared the same FireWire bus anyway, so they'll just need to daisy‑chain their devices, or bear the extra expense and hassle of a hub if this isn't possible. Another option is to use the ExpressCard slot for a third‑party FireWire card, which gives you the additional ports and the bonus of them being on a separate bus.

However, if you were considering purchasing a MacBook and need to use it with a FireWire interface, you're out of luck: the MacBook has never offered an ExpressCard slot. And although Apple are continuing to sell the previous white MacBook (which does have FireWire, that model is less capable than the newer one and might not be the best bet for music and audio software.

Another aspect of the new connectivity worth mentioning is that both the MacBook Pro's DVI port and the MacBook's Mini‑DVI port have been replaced by a Mini DisplayPort connector, which is Apple's smaller implementation of the new DisplayPort interface (see box below). However, the Mini DisplayPort is something of a mixed blessing because there's currently only one monitor available with such a connection: Apple's own, new 24‑inch Cinema Display, which was announced at the same event.

Even more bizarrely, Apple currently don't offer a Mini DisplayPort to regular DisplayPort adaptor, so it's not actually possible to connect the new laptops to a monitor that has the latter connection at this point. I'm sure Apple will remedy this situation.

So while the new MacBook Pros and MacBooks are great computers, the connectivity issues are worth considering before you make a purchase. Right now, the 17‑inch MacBook Pro, which hasn't been restyled like the 15-inch, may remain a sensible option, as it still offers both Firewire 400 and 800 ports, has the option of a matte‑finish display, and comes with a regular dual‑link DVI port.

DisplayPort: What's It All About?

Rather than being some fine vintage of Portuguese fortified wine, DisplayPort is actually a new interface for connecting digital displays to computers. Developed by the Video Electronics Standards Association (VESA) as a successor to the Digital Visual Interface (DVI) you'll currently find on most computers, DisplayPort offers a number of advantages over DVI, many of which are deeply technical in nature, and principally it provides more bandwidth than DVI using a smaller physical connector. Whereas DVI offers single and dual‑link modes with data rates of 3.96 and 7.92 Gbit/sec, to support maximum resolutions of 1920 x 1200 (typically used by 23‑ and 24‑inch displays) and 2560 x 1600 pixels (used by 30‑inch displays) respectively, a single DisplayPort 'link' offers 10.8Gbit/sec and can easily support the same 2560 x 1600 resolution.

With this extra bandwidth, DisplayPort affords flexible ways of extending the standard, and also enables up to eight channels of 16‑ or 24‑bit digital audio with a maximum sampling rate of 192kHz to be transmitted over the same connection. It will be interesting to see if this ability is exploited by manufacturers for professional audio situations, or whether it remains in the home‑cinema domain.

Unlike DVI, which is able to transmit both analogue and digital video, DisplayPort is a digital‑only interface. However, while DisplayPort is completely incompatible with VGA and DVI, it is able to pass these signals, assuming the hardware you're using supports sending and receiving them over DisplayPort. One particular use for this ability is to make it easy for a manufacturer to offer DisplayPort to VGA or DVI cables for their hardware, as Apple do with the new MacBook Pro and MacBook computers via the Mini DisplayPort connection.

Most computer and display manufacturers have committed to using DisplayPort, and already there are companies such as Lenovo and Dell — as well as Apple, of course — shipping products featuring this new technology. So you can expect that DisplayPort will become more ubiquitous in the coming years.