Getting Started With Capacitor Mics Skip to main content

Getting Started With Capacitor Mics

Things You Should Know By Hugh Robjohns & Paul White 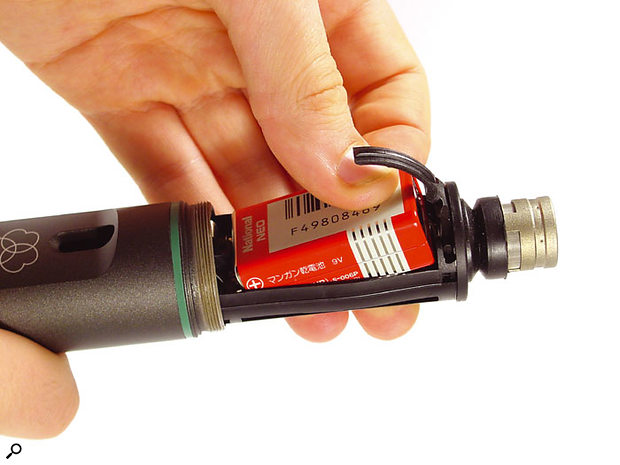 Some back-electret condenser mics, such as the AKG C1000, will happily run from an internal battery, although in certain cases this can compromise the mic's performance.

With affordable capacitor mics now flooding the market, more musicians than ever before have access to the means to make high-quality recordings. But if you're new to this type of mic, there are some important things you need to know to get good results without damaging your investment.

Here you can see the internal construction of a typical budget condenser microphone — the large-diaphragm true-condenser Groove Tubes MD1b. At the top is the capsule with its gold-covered plastic-film diaphragm. Underneath the capsule is a rubber shock-absorbing mounting to protect the capsule from handling noise and stand-borne vibration. The impedance-matching electronics can be see on the circuit boards halfway down, and the output balancing transformer and socket connections are inside the metal module at the bottom.Before the influx of cheap Chinese and Eastern Block capacitor microphones (also called condenser microphones), few home studios had access to anything other than dynamic or very cheap electret models, simply because 'decent' capacitor mics were so expensive. However, now anyone can afford one.

The problem is that, while audio professionals learnt how to use and care for their capacitor mics, today's owners often get little more than a basic spec sheet. This short article is designed to fill in some of those gaps and to help new purchasers get more out of their investment.

How Does A Capacitor Mic Work?

The vast majority of capacitor microphones — by which I mean both 'true' DC-polarised condensers and back-electret models — are based around a metal-covered plastic diaphragm. Gold evaporated or sputtered onto mylar is a popular combination, the resultant diaphragm membrane being thinner than a human hair. This diaphragm is supported in front of a metal backplate, and these two conductive 'plates' form a simple capacitor — a device which can be used to store electrical charge.

The amount of charge that can be stored is proportional (amongst other things) to the distance between the two plates. Consequently, most capacitor microphones work by detecting the minuscule changes in stored charge which occur when the diaphragm moves relative to the backplate in response to passing sound waves. The stored charge can be generated in a couple of different ways: either by using a relatively high DC polarisation voltage, usually derived from phantom power; or by using a permanently charged film fixed to the backplate of the mic (the so called 'back electret' design).

In both cases, it is vital that the stored charge doesn't leak away, so the audio output circuitry has to present an extremely high impedance. Thus all capacitor microphones incorporate a suitable impedance-matching preamplifier very close to the capsule, based either on solid-state FETs or valves. The aim is to present an extremely high input impedance to the capsule, but a very low output impedance to the mic cable.

Regardless of the way in which the stored charge is generated, both kinds of capacitor microphone obviously require power for the internal impedance-matching preamp. This is usually obtained from phantom power again, but some mics can be operated from an internal battery instead, and valve microphones are usually powered from a dedicated mains PSU.

All About Phantom Power

The vast majority of solid-state capacitor microphones require phantom power. This is usually specified as 48V DC (at a very low current), although some microphones can operate with phantom supplies anywhere between 9V and 52V. Phantom power is completely safe, and is provided by all serious mixers and mic preamps, as well as by some portable recorders. 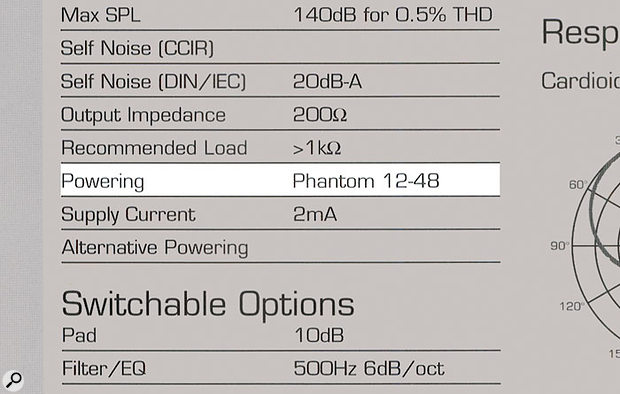 Most condenser mics will require phantom power to be provided from the mic preamp at a nominal 48V, but in practice some microphones are fussier than others about what phantom voltage they need. A glance at the specs will usually indicate the range of voltages over which a given mic can be used.

It is worth stating at this point that phantom power is not the same as the 'plug-in power' offered on 3.5mm jack sockets by some domestic Minidisc recorders, consumer camcorders, and their ilk. The latter system is much lower in voltage and is intended for the kinds of cheap electret mics supplied with some domestic recorders. 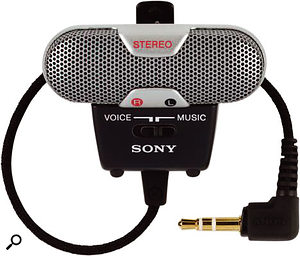 Care must be taken with some microphones intended for use with portable recorders, such as the miniature Sony ECM719 stereo mic (above), as these are designed to use the lower-voltage 'plug-in power' standard, and could be damaged by a studio 48V phantom supply.

The reason phantom power is so called is because the DC voltage is sent down the same balanced cable that carries the microphone's audio output signal, which means that it's invisible (like a ghost!) as far as the microphone preamp in the mixer is concerned. Essentially, the positive side of the 48V DC power is connected to both signal wires, while the negative side is connected to the cable screen.

As a result, phantom power only works if the microphone is connected via a correctly wired, balanced mic cable. You can't, for example, use XLR to jack adaptors to feed capacitor mics into four-track recorders with jack inputs — jack inputs rarely if ever have phantom-powering facilities.

It is undeniably kinder to both your mics and your preamps if you connect them up with each other before switching the phantom power on, and that you switch the power off before unplugging them. More importantly, always make sure the channel faders or monitoring volume controls are turned down when switching the phantom powering on or off, as the loud bangs and thuds that often occur can potentially damage your loudspeakers or even your ears.

Most professionals will happily 'hot plug' mics while phantom power is already on, and with properly wired cables and quality connectors I've never known this to cause any problems beyond the loud bangs and thuds (hence only ever do this if the faders are turned down on the relevant channels). However, there is a school of thought that says this practice can stress the electronic components in the microphone or preamp and may lead to increased noise levels or even premature failure. So, the safest practice is this: connect first, switch on phantom power second.

Before leaving phantom powering, there's one more thing worth mentioning. Some pieces of equipment, especially portable devices, offer phantom powering voltages lower than the standard 48V. As already mentioned, some mics will work on lower voltages, at the expense of greater supply current and possibly reduced headroom (that is, the maximum level they can handle is lower), while others won't be happy at all. The spec sheet that comes with your mic will tell you what phantom power voltage range it will work over.

Some dynamic mic endorsees have been known to claim that they're tough enough to knock nails in with, and this might well be true. I wouldn't recommend it, though, and it certainly doesn't apply to capacitor mics. The capsule assembly is a very complex and delicate thing, and while modern models are tougher than they used to be, capacitor mics in general don't like being dropped or knocked about.

When fitting a mic to a stand, the best way is to loosen the clutch lock on the stand pole or boom arm so that it can rotate freely. Then, while holding the mic firmly, rotate the stand pole or boom arm to screw it into the mic's stand adaptor thread. This is far safer than trying to wind a mic around and around on the top of the stand thread, and you are far less likely to drop the mic — especially when removing the mic after the session! 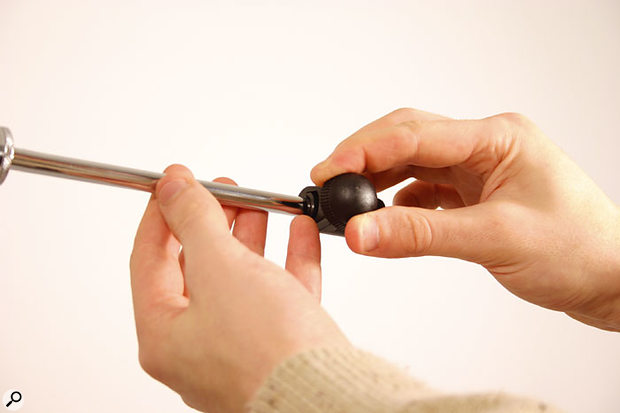 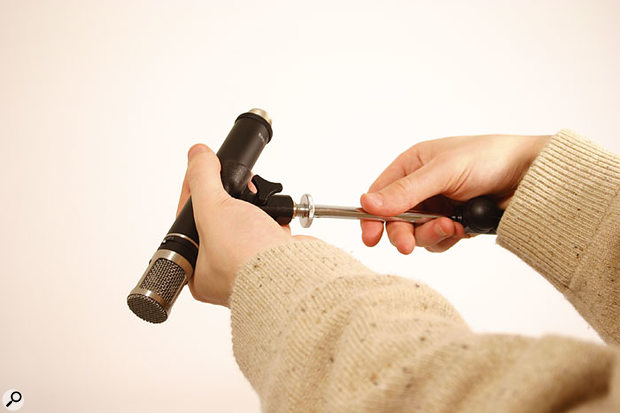 Although it might seem more straightforward to mount your mic on its stand by simply twisting the mic's clip around the stationary mic stand, this increases the risk of dropping the mic, and also won't work if the mic already has a cable plugged into it. A better method is to loosen the tightening nut on the boom arm (top) and then to turn the boom arm while holding the mic stationary.

If the mic comes in a wooden box, you shouldn't even let the lid slam with the mic inside, as the resulting pulse of air pressure might just damage the diaphragm, though that is less likely now than perhaps once it was when capsules were more fragile. However, capacitor mics are precision tools, so treat them with respect.

I explained earlier that the capacitor microphone relies on measuring tiny changes to the stored energy in the capsule. Anything electrically conductive in contact with the diaphragm can drain the stored energy very easily and thus disrupt the mic's performance — generally resulting in lower output, more noise, and frequent 'frying' noises! 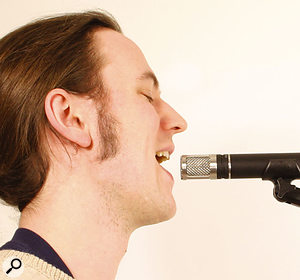 Singing very close to a condenser mic, especially if the mic is cold, can cause condensation to form on the mic's capsule, producing audio fizzes and crackles. Using a pop shield can help against this by distancing the singer from the mic.

Contact-enhancing sprays should never be used where they might drift onto a mic capsule, as you could cause irreparable damage to the mic. Smoke particles, dust, and other airborne contamination can also settle on the diaphragm and can cause problems, and while diaphragms can be cleaned, it is a very skilled (and therefore expensive) process, and not something you should ever try at home!

Undoubtedly the most common difficulty with capacitor mics, though, arises from humidity variations — the amount of water vapour in the air — although fortunately this is usually only a temporary problem. Warm moist air will condense on cold metal, and water is sufficiently conductive to start a capacitor mic crackling and spluttering. This is often a problem if you bring a cold microphone into a warm studio, or if a vocalist is working very close to a mic — the breath from a singer's mouth can condense on the diaphragm and produce nasty crackles and fizzing noises. A correctly positioned pop shield usually avoids this in all but the coldest studios, and it is well worth while allowing a capacitor microphone to warm up to room temperature before use.

If you suspect that you have condensation problems, the only solution is to let the mic dry out on a shelf above a radiator or in an airing cupboard. While professional studios are unlikely to have condensation problems caused by the studio environment itself, garage studios and studios set up in basements are more likely to fall foul of this problem, so ensure that they are properly heated and store your mics somewhere reasonably clean, warm, and dry.