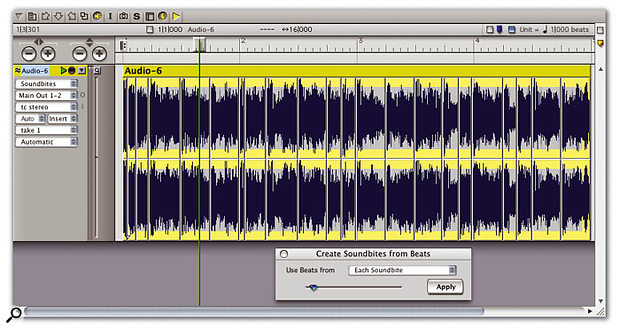 The 'Create Soundbites from Beats' window allows Soundbites to be split up into their beat components.

Smooth your audio edits, create soundbites from beats, find out about tempo analysis and get the run-down on why you need the DP 4.52 update — all in this month's Performer Notes.

Last month in Performer Notes, I looked at the basics of DP 4.5's new Beat Detection functions, in particular how they can be used to quantise audio that has drifted slightly from a click track, and how they enable easy editing of rhythmic audio. This month the spotlight turns to some related DP 4.5 features: using Beats as the basis for individual Soundbites, Smooth Audio Edits, and the powerful but mysterious Tempo Analysis.

There are several reasons why you might want to create multiple beat-length Soundbites from one 'parent' Soundbite, and the Audio menu's 'Create Soundbites from Beats' command lets you do this. First of all, it could be a convenience feature for splitting up individual kick, snare and hi-hat beats from a drum-kit Soundbite (say), prior to dragging them to Mach Five. Second, isolating beats and then edge-editing them to be shorter can give a very aggressive, modern, 'gated' effect. Finally, if you've split an audio loop into smaller Soundbites, a large reduction in sequence tempo will cause them to simply move apart, potentially avoiding the artifacts that extensive timestretching can impose. As Propellerhead's REX and other loop formats demonstrate, the odd bit of silence between individual beats in a rhythmic loop can often go unnoticed, especially if there's some reverb in place, or the loop is being played against other instruments.

Using this feature is very easy. You simply select a Soundbite and choose 'Create Soundbites from Beats'. In the little window that appears, the slider performs a similar 'threshold' function to 'Adjust Beat Sensitivity', discussed last month — it's a very intuitive control. There's also a pop-up menu, for when you've first selected multiple Soundbites. Choosing the 'Each Soundbite' option effectively combines all the beat divisions from all the Soundbites, whereas choosing a specific Soundbite causes this to become the 'master', as it were, with its beats being imposed on the other Soundbites. Finally, don't forget to click 'Apply'.

If you have an audio loop with a great rhythmic groove, this can be extracted and used to quantise other audio and MIDI. Make sure your loop has undergone Beat Detection, then select it and choose Create Groove from the Region menu. After you've named it, it should be available in the Groove Quantize window (Apple-G) ready for use.

When you're working with beat detection, don't be confused if your Soundbites appear to have no beats at all — DP doesn't display them when the Sequence Editor is zoomed out beyond a certain point. Zoom in a little and you should see them once again.

The new Smooth Audio Edits function that was introduced in DP 4.5 doesn't rely on audio having been subjected to Beat Detection. It will work on any Soundbites that are separated by areas of empty track, and is just about ideal for dialogue and voice-over editing, although it can be pressed into use for musical purposes too. It promises to smooth over silence by either automatically edge-editing or inserting so-called Room Tone, which it can generate itself, or which you can specify. 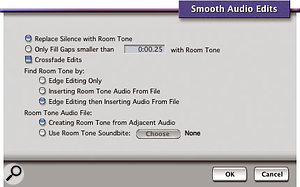 DP 4.5's Smooth Audio Edits function aims to fill areas of silence between Soundbites with 'Room Tone', though it's capable of some altogether less conventional effects.To use Smooth Audio Edits in its simplest form, just select two adjacent Soundbites in a track. They must not be touching or overlapped with each other. Then choose Smooth Audio Edits (shift-ctrl-A) from the Audio menu. A dialogue box appears that allows you to configure how the process will work. Firstly, you can choose to fill all silences regardless of length, or specify the maximum length of gap to be filled. DP then needs to know how to fill the gaps, which it can do by Edge Editing the existing Soundbites (this presumes that they're parts of a longer audio file), or inserting a completely new Room Tone Soundbite, or a bit of both. Once the gaps are covered you can have DP crossfade the Soundbite boundaries, in which case the most recent settings made in the Fade dialogue box (ctrl-F) are used. (This is important since 'Equal Power' fades are often the most musically convincing.) Finally, there's the option to either let DP create Room Tone itself, or for you to specify where it should come from.

For dialogue editing, the default settings here (Replace Silence, Edge Edit then Insert Audio, Create Room Tone from Adjacent Audio) can give great results, though if you're stitching together disparate drum loops, for example, Edge Editing with crossfades can work really well. You might also try, as I did, the rather entertaining option of choosing a deliberately incompatible Room Tone Soundbite, such as a sustained vocal, for example, to piece together a rhythmic track. The results can certainly be interesting, and are often extremely novel-sounding.

This must surely be one of the least intuitive features of DP 4.5, though it's certainly worth investigating. It's such a complex beast, though, that I'll be looking at the practicalities next month, and for now just explaining some of the theory.

Tempo Analysis is completely dependent on Beat Detection, and aims to automatically establish an accurate tempo for Soundbites that don't already have one, or have an inaccurate one. If you're already thinking 'what the...?' then that's probably because you've never needed to deal with the concept of Soundbite tempo before, and it would certainly be possible to use DP for years and not have to!

To quickly summarise the situation, when you record audio directly into DP, the resulting Soundbites have a 'tempo' — a record of what the sequence tempo was when they were recorded. This holds true even if there were tempo changes in the Conductor Track when you recorded the audio. Left to their own devices, these tempo maps don't do much, but if you were to change your project's tempo they'd allow you to keep the audio playing in time, via the Audio menu's 'Adjust Soundbites to Sequence Tempo' command. It has been possible for some time to do the same for audio that had no tempo map, or an inaccurate one, using the 'Set Soundbite Tempo...' command (found in the Audio menu under the Soundbite Tempo sub-menu). This was discussed in Performer Notes way back in SOS June 2001.

Tempo Analysis, then, is yet another variation on this general theme. Since DP 4.5 knows about beats within audio, Tempo Detection uses that knowledge to try to work out where the 'bar lines' in the music lie, and to set a tempo (or tempos) for Soundbites based on its conclusions. It's a convenience feature, certainly, but one which could save hours of work in some circumstances. If you always record audio against click tracks or MIDI backings, you'll have little use for it — your Soundbites will already have tempo information — but if you import audio from CDs or other applications, or sometimes like to record audio completely 'clickless', it could be useful.

Next month, we'll get the lowdown on the slightly abstract world of Tempo Analysis. You have been warned!

Shortly after I finished writing last month's Performer Notes, MOTU released their first DP 4.5 update, version 4.51. As well as 'maintenance' improvements, this added some interesting new features, but unfortunately some less welcome ones too, such as a bizarre latency problem with Instrument tracks. To their credit, though, MOTU quickly fixed the problems, and we now have DP 4.52. The consensus is that this is a good, stable release, and as it's a free download it's much recommended to anyone still using 4.5 or 4.51.

The 'Num' column in the Marker window simplifies marker numbering in DP 4.5 and allows a quick locate function via the shift-ctrl-M keystroke.The most intriguing feature of DP 4.52, I think, is the new Dynamic CPU Management scheme. This causes plug-ins that are not actively processing audio to be effectively bypassed, ceasing to use any of the available processing power of your Mac. As soon as they receive audio, though, they 'wake up' and behave just as before. The benefits of this feature are obvious: since it leads to generally lower processor usage levels, it should mean that DP 's screen redraws and background-processing functions are that much faster, especially when you're not playing back a sequence. It could also mean that it'll be easier to use multiple instances of heavyweight plug-ins (such as Altiverb, for example) as long as they're not all used simultaneously. But I can't help thinking that Dynamic CPU Management is something of a double-edged sword. No longer are you able to see the 'hit' a plug-in imposes when it's instantiated, making it that much harder to manage CPU usage on slower Macs. You could get a nasty surprise when you hit the Play button. I did wonder whether an additional indicator — total potential CPU use — could be added to the Audio Performance window, and apparently this is a possibility, although MOTU are making no promises.

A much simpler enhancement is the one to allow markers to be flexibly assigned 'locate numbers'. DP always allowed number access to markers — you'd hit shift-ctrl-M, type in a number that corresponded with the marker's position in the Markers window, hit Return, and the playback wiper would jump to that point. But having become familiar with marker numbers for a particular sequence, if you added a marker between two existing markers, this would cause all the following ones to be re-numbered.

The new scheme doesn't behave like this. If you already have 10 markers in your sequence and you add a new marker between those in positions one and two, it's assigned number 11. This means that you should never need to re-learn marker numbers once they've been defined, and any potential confusion caused by numbers being non-consecutive can be quickly cleared up by checking the Marker window: the new 'Num' column shows what's what and allows you to assign new numbers at any time. You can either double-click an individual marker's number and type in a new one, or use the mini-menu's 'Re-number by Time' command to impose a strict order once again. Just remember: shift-control-M, number, hit return — perhaps the quickest locate function of all in DP.