Here's a Device Panel (far left) for the A1 VST Instrument, that allows you to control its most common filter parameters in the Inspector of a MIDI Track assigned to the A1. And yes, Device Panels can even be coloured orange...

Device Panels were introduced in Cubase SX 3 to enable the creation of on-screen interfaces for controlling MIDI devices. Here we look at how you can create one to control plug-ins.

When I reviewed Cubase SX 3 back in November's issue, one of the points I made regarding the new MIDI Device Panels feature (user-definable interfaces featuring controls such as knobs, sliders, and so on) was that it was a shame you couldn't use such panels to control internal devices, such as VST Instruments, in the same way you could now control external MIDI devices. While VST Instruments already have some kind of panel or editor window for adjusting parameters, the great thing about MIDI Device Panels is the fact that they can be displayed in the Inspector or in the extended section of the Mixer. Wouldn't it have been great if you could have put certain parameters from VST Instruments in the Inspector or on the Mixer?

Steinberg obviously realised that the answer to this question was 'yes', since the newly released SX 3.01 update, which can be downloaded from www.steinberg.net, features the ability to create Device Panels for VST Instruments and effects. Unfortunately, Device Panels (for either internal or external devices) is a feature that's not available for users of Cubase SL.

Creating Device Panels for internal devices is, in some ways, easier than doing the same for external devices, since Steinberg have removed the need for entering controller numbers or system exclusive data during the process of assigning on-screen controls to VST plug-in parameters. The only thing that's initially confusing is how you actually create a Device Panel for a plug-in, since the list of plug-ins used in your current Project isn't available from the MIDI Device Manager window, where you would normally work with Device Panels. Let's work through an example, then, to illustrate how it's done.

When there are no Device Panels created for a plug-in, the Device Panel menu will show 'Set Up' as an available Panel, and you should double-click this entry. The Device Panel manager window will open for A1, and to create a new Panel start by clicking the Add Panel button. The Add Panel window lets you name the Panel you're creating and choose one of three sizes: General Size, for working in a dedicated MIDI Panel editor window; Inspector Size, with boundaries set for creating a Panel that can be displayed in the Inspector; and Channel Strip Size, for creating a Panel to be displayed in the channel strip of an Extended Mixer. General Size is largely unnecessary for plug-in Panels, as plug-ins already have their own dedicated editor windows, so for this example choose Inspector Size and click on OK.

Say It With A Reverb Plug-In

What did you get for Christmas this year? A pair of socks? Some chocolate, maybe? SX 3 users received a new reverb plug-in as part of the pre-Christmas 3.01 update, which Steinberg Senior Product Manager Arnd Kaiser described as "a Christmas gift for all our Cubase SX 3 customers." Roomworks is possibly Steinberg's best-ever bundled reverb, which perhaps doesn't say too much coming after such classics as Wunderverb and Reverb A! But seriously, Roomworks is surprisingly good, and the plug-in follows the same aesthetic style as the three most recent plug-ins to join the Cubase family, Tonic, Monologue and Embracer, which were discussed by John Walden in November's Cubase Notes. One extra-nice touch to the user interface is that when you hover the mouse over the plug-in's controls, a description appears in the lower part of the window to explain the application of that particular control.

One of Steinberg's feature highlights for Roomworks is an efficiency slider to let you scale the CPU resources consumed by the plug-in. An efficiency setting of zero percent gives the most natural sound, but uses the most power, while a setting of 100 percent gives a somewhat unnatural sound (which might be useful for sound-destruction purposes) and uses very little power. Another neat feature of Roomworks is that when it's used on surround configurations it can output four channels (front left and right, plus rear left and right), and an extra set of surround controls is displayed to let you set both the position of the listener and the balance of the sound from front to rear locations.

Just above the selection of objects, in the top-right of the window, is the Object pop-up menu, where you can select different categories of objects to add to a Device Panel. Let's start by adding a knob: select Knobs from the Objects pop-up menu. Now drag the middle knob in the top row into the main Device Panel editing area. A light-blue outline indicates the boundaries of the Device Panel, so that the one we're creating will fit neatly inside the Inspector. 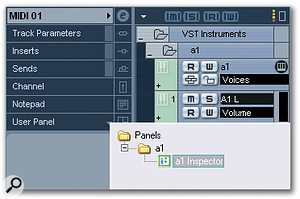 Once you've created a Panel for a VST Instrument, you can view it in the Inspector of a track assigned to that VST Instrument. Just click the small triangle in the title bar of the User Panel Section, then double-click the Panel in the menu that appears.The Control Parameter Assignment window will appear, but for now click Cancel. The reason is that, in this case, you'll notice that only the basic plug-in management parameters for automation, program selection and so on are available. And again, since these parameters are easily available for a plug-in anyway, there's really not that much point in adding them to our Panel. Instead, once you're back in the main editor window, select the new knob by clicking it once (so that a green outline appears around the object's border). Let's say we want to assign this knob to the filter cut-off parameter in the A1. To do this, open the A1 / Filter / Parameters folder in the hierarchical list of parameters in the editor and select Cutoff. Now, in the lower-part of the middle section of the editor window, click the Assign Parameter button and notice how the text fields above change from 'a1' and 'Not Assigned' to 'a1/Filter' and 'Cutoff'. You can give a name to this particular knob by double-clicking the word 'Title' underneath it, typing the name into the Enter Text window and clicking OK. (Double-clicking the actual knob rather than the word beneath it opens up the Control Parameter Assignment window again.)

Now that we've created a very simple Panel for the A1 plug-in, let's try it out. Close the Device Panel editor window and Cubase will ask you if you want to save the Panel, so click Save. In the Project window, create a MIDI track and assign its output to A1. Now open the User Panel section in the Inspector, click the small triangle in the title bar of the section and select the Panel we just created, from the A1 / Panels folder. You can now use the Cutoff knob in this Panel to control the cut-off frequency of the filter in the A1 without having to open the editor window.

And that's basically all there is to creating Panels for plug-ins. In the case of A1, you might be thinking that it would be easier to create a Panel that basically sends Controller values to the plug-in, since A1 can be remote-controlled by incoming MIDI Controller data. However, the advantage in the way Steinberg have implemented Panels for plug-ins is that these Panels are tied to the plug-in internal automation system, which offers two-way communication. In other words, the Panels are updated to reflect the current state of the plug-in, and this would not be possible (or at least not quite so easy to achieve) using Controller data. You can see this for yourself by opening the A1 editor window alongside the Panel and noticing how the A1 's cut-off control is adjusted when you work with the Panel, and vice-versa.

Once you've created a Panel, you can edit it again in the same way by Control/Apple-clicking the Edit VST Instrument button in the VST Instrument Device track and choosing Setup from the pop-up menu. This time, once the Device Panel manager appears you'll need to select the Panel you want to edit and click Edit Panel. Alternatively, underneath the Setup entry in the menu you'll notice a folder with the name of the plug-in for which you're creating a Panel, and you can open this folder to select the Panel. Double-clicking the Panel name opens the Panel for use in its own window, detached from the Inspector or a Channel Strip, and you can edit it by clicking the 'e in a circle' Edit Device button on the toolbar of the window. 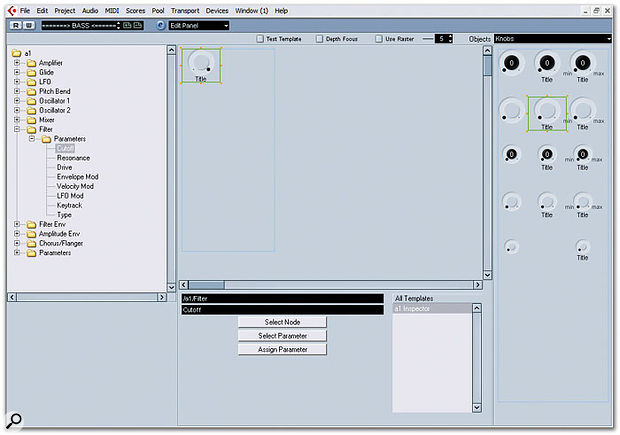 The Device Panel Editor window allows you to create Panels for both plug-ins and external MIDI devices. Here you can see the A1 VST Instrument's Cutoff parameter being assigned to a knob object.

Device Panels are automatically saved with the plug-in, so the Panels you create are always available to other Projects and to different instances of the same plug-in within a single Project. While we've looked at creating a Panel for a VST Instrument in the above example, it's also possible to create Panels for VST effects, as mentioned at the start of this article. Unfortunately, this only works for Audio tracks in the current version of SX, as opposed to Group or FX tracks, since only Audio tracks have a User Panel Section in the Inspector.

To create a Panel for an insert effect on an Audio track, Control/Apple-click that track's Edit Channel Settings button, in either the track or the Inspector, and choose Setup from the appropriate sub-folder for the track and insert you want to work with. After this, the Panel can be displayed on that Audio track's Inspector in the User Panel section, or in the User part of the Extended Mixer.