Not every enhancement to your audio PC is worth the money — and top-spec graphics cards are a case in point...

Much of the latest news in the mainstream PC press seems to concern powerful desktop graphics cards, such as AMD's next generation Radeon HD9600 (Cayman) series, which will feature up to 2GB of video RAM and is likely to become the fastest series of single GPU (Graphics Processing Unit) cards on the market.

Speedy cards like this are meat and drink to game players, who need to shift loads of 3D data around at ever-higher speeds, but musicians simply don't need this amount of graphics processing power, and will be wasting their money if they indulge. Nor will most musicians miss the associated noisy fans needed to keep such cards cool; their thermal design power can be up to 300 watts!

The 2D graphics found in audio applications have remarkably modest requirements, so while many musicians manage to consume all their main processing power, a typical professional DAW is likely to feature a far more modest PCIe dual‑head graphics card with 512MB of on‑board RAM and passive heat‑sink cooling. 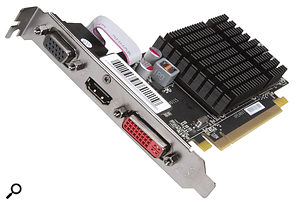 A modest, passively cooled, ATI Radeon HD5450 graphics card with 512MB of 64‑bit DDR2 RAM, such as this model from XFX, is by far the most popular option for audio PCs.The most popular such card at the moment seems to be the ATI Radeon HD5450 (or the slightly older and warmer‑running HD4550), with the Nvidia GeForce G210 as runner‑up, all three featuring 512MB of RAM. Occasionally you'll still see mention of the slower ATI HD4350 or Nvidia GeForce 7300 with 256MB of RAM; when DAW builders source a reliable, quiet, yet cheap graphics card, they tend to keep using it until it's no longer available. I'm still running a GeForce 7300LE with 128MB of RAM very successfully in my own PC.

Most of these cards retail at under £40$50, and all are perfectly adequate for most audio PCs. Some entry‑level audio PCs now even feature motherboards with on‑board graphics chips, such as AMD's ATI Radeon HD4250 or Intel's GMA X4500HD (this is also integrated into Intel's Core i3 range and some Core i5 processor families). These all share system RAM, rather than having their own dedicated graphics RAM, but no longer cripple performance for those on a tight budget, as previous designs were prone to do.

Some professional DAW builders do offer higher‑end graphics options, such as 1024MB of RAM and dual DVI outputs for digitally connecting two larger and higher‑resolution monitor screens, as well as providing sharper image quality. The ATI Radeon HD4650 is one such model, offering a maximum resolution of 2560 x 1600 pixels. Others may offer triple‑head or even quad‑head cards suitable for those with even more ambitious panoramic display requirements. However, to the best of my knowledge, none offer power‑guzzling 3D graphics cards to musicians, since the extra graphics power would simply be wasted. 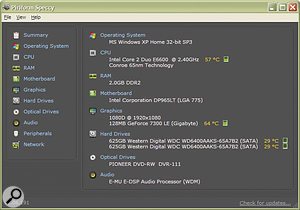 If you need a quick overview of the major components used in any PC, try Piriform's Speccy.So do you know which graphics card or chip is in your PC? Sometimes it's very handy to be able to get a quick rundown of all the components installed in a computer, whether it's yours, a friend's machine, or a new model you're trying out in a shop. For a long time, I've used Sisoftware's Sandra (www.sisoftware.co.uk) for this purpose, as it not only provides a vast repository of technical info about your machine spread across loads of different screens, but also offers a wealth of general‑purpose benchmark tests. CPUID's PC Wizard (www.cpuid.com) also offers a lot of information on the inner details of your hardware components, buses, power scheme and so on.

However, sometimes you just need a basic, easy‑to‑read hardware overview, and just recently I discovered Piriform's Speccy (www.piriform.com/speccy), which has proved to be an ideal candidate for this task. Speccy is available free, like the other utilities mentioned here, but at under 4MB, the multi‑language download is several times smaller. It's a model of clarity, displaying a summary of all the main components in your PC, along with various operating temperatures, and you can get lots more detail from the various sub‑pages if you need it.

State Of Eight: Microsoft's next operating system, Windows 8, is said to have a likely release date of late 2012. It is rumoured to be 64‑bit only, incorporate support for USB 3 and Bluetooth 3, and should concentrate on improving startup and resume times, along with power efficiency (which could mean yet more sophisticated CPU-throttling schemes for the musician to deactivate). A Windows Store is also likely to appear, along the lines of Apple's 'App Store', so that users can browse and download applications from a central 'approved' source.

In The Sun: Fed up with replacing batteries in your wireless PC keyboard? Logitech's new wireless Solar K750 model powers itself via integrated solar panels and, fortunately for musicians, also works indoors with artificial light sources. Go to www.logitech.com for more information.