Pro Techniques Put To The Test

In our quest for the ultimate electric guitar sound, SOS tested favourite recording techniques from over 40 top-flight producers and engineers. Hear for yourself the results that amazed us.

The following audio examples demonstrate the impact that the choice of recording room and the position of the amp can make. All the examples were recorded with the same guitar and amp (a Fender Telecaster and Fender Twin Reverb), and were miked with the same SM57, placed directly on axis to the centre of the speaker cone and six inches from the grille.

The guitar cab set up in the centre of a small studio live room, measuring approximately 4.7 x 4.2m, with a ceiling sloping from 2.2m to 4.8m high.

The guitar cab in the centre of the same live room, raised a foot in height on a heavy-duty podium.

The guitar cab in the corner of the same live room. 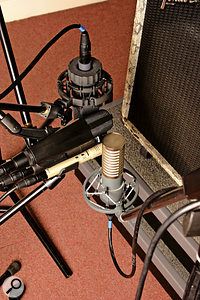 The same amp was miked with five different mics at once. Although the inevitable difficulty in placement means that there will be variations in tone due to the positioning of each mic in relation to the amp, the resulting recordings should give you a good impression of the differences in sound between these mics. The first thing to say is that every model of mic sounds different, and I'm not going to try to do audio examples of all the mics mentioned in this article (if you'd like to compare how a large number of specific mics sound, check out the 3D Audio comparison CDs available at www.3daudioinc.com). However, to give an idea of the kinds of differences engineers work with, I recorded the same guitarist with five different mic types, as follows:

These are recordings made by five mics set up on axis as close as possible to each other. They were positioned at the centre of the speaker cone at a distance of around six inches from the grille. The mics were: a Shure SM57 dynamic and a larger-diaphragm Sennheiser MD421 dynamic; an AKG C414B XLS large-diaphragm condenser and a Shure KSM137 small-diaphragm condenser; and an SE Electronics R1 ribbon. Because all the mics were recorded at the same time, you can try mixing and matching them (as discussed in the article) by simply lining up the audio files in your MIDI + Audio sequencer, without serious phase-cancellation effects. 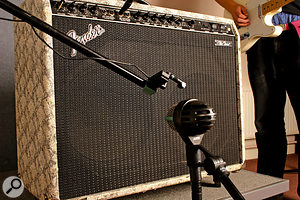 The AKG D112 and C418 clip-on mic combination, as described by Steve Albini.These examples illustrate the range of sounds available from two common mic pairings discussed in the article: a Shure SM57 with a Sennheiser MD421 and a Shure SM57 with a large-diaphragm condenser mic (in this case the AKG C414B XLS). At the start of each audio example only the SM57 can be heard, but then the other mic fades in until, by the middle of the example, both mics are at equal level. Then the SM57 fades out during the remainder of the audio example.

Here, I recorded the same guitar cab with comparatively dark and bright mics in order to try out Steve Albini's dark/bright-mic approach. The mics in question were AKG's D112 kick-drum mic and C418 clip-on snare mic, both on axis at the centre of the speaker cone at a distance of around six inches from the grille. You can hear the range of sounds available from mixing these two mics in the third audio example, which starts with only the D112, but then fades in the C418 until, by the middle of the example, both mics are at equal level. Then the D112 fades out during the remainder of the audio example. 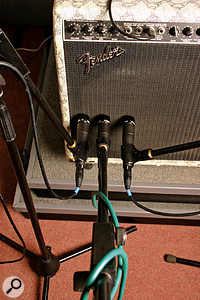 The speaker cone of a guitar amp will sound different when close-miked at the centre than when miked at the edge: it is worth experimenting to get the sound you want.These examples show how different mic positions can affect the tone of a recorded guitar cabinet.

These examples were recorded simultaneously via three on-axis SM57s, directly on the speaker grille: the first at the centre of the cone, the second at the edge, and the third midway between the two.

Three SM57s were placed as close as possible together at the centre of the speaker cone and directly on the speaker grille. The first was on axis, the second was angled at around 22 degrees and the third at around 45 degrees.

Here, three SM57s were placed on-axis at different distances from the centre of the speaker cone. The first was right up by the grille, the second at 12 inches, and the third three feet away. 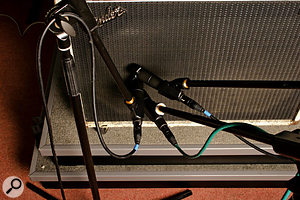 The angle of the mic in relation to the speaker cone will also affect the tone. 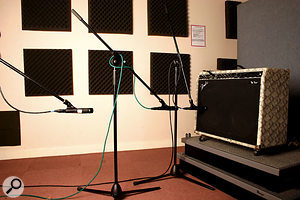 How far away from from the speaker cabinet the mic is placed has a significant impact on the recorded sound. 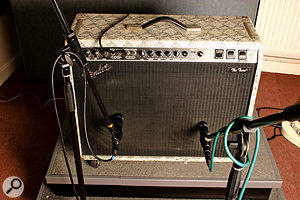 All speaker cones are not created equal! Normally, if an amp or speaker cab has more than one speaker cone each will sound different, and it is worth finding out which one you prefer. You can even try recording two different cones and blending the sounds, as described above.

To compare the sound of the Fender Twin Reverb's two speakers, I placed Shure SM57s directly over the centres of the different cones, on axis and right up against the grille. This also gave me the opportunity to try out the dual-mic technique mentioned by Steve Churchyard. You can hear the range of sounds available from mixing the mics in the third audio example, which starts with the left-hand SM57, but then fades in the right-hand SM57 until, by the middle of the example, both mics are at equal level. The left-hand SM57 then fades out during the remainder of the audio example.

Here's a stab at Tony Platt's dual-mic AC/DC technique, using two large-diaphragm condensers, about six inches apart and pointing at different speakers, placed about six inches from the grille. In the third example I have panned the mics a little left and right respectively, to demonstrate the stereo spread effect he talks about. 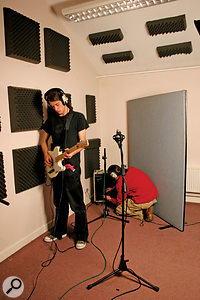 The 'Vortex' setup described by Chris Tsangarides, is a great way to add ambience. The setup pictured above is a variation created by the author for a small studio, where one of the walls was used in place of baffles for one side of the flare.

To illustrate the possibilities available from ambient mics, I recorded the same guitar performance with three mics simultaneously: a Shure SM57 close mic on axis to the centre of the speaker cone and up against the grille, and a stereo pair of AKG C3000 large-diaphragm condenser mics a few metres away. The third audio example illustrates the range of sounds available by mixing the close and ambient mics. The example starts with the SM57, but then the ambience mics fade in until, by the middle of the example, all mics are at equal level. The close mic then fades out during the remainder of the audio example, leaving just the ambience.

These examples give some idea of how Chris Tsangarides' Vortex technique can sound, even when adapted to suit a smaller room, as I've described in the main article. The guitar cabinet was set up in the corner of the room, with a single, large acoustic panel making up one side of the 'flare'. All the mics were large-diaphragm condensers: the first, an AKG C414B XLS, was on axis over the centre of the speaker cone, right up against the grille; the second, an AKG C3000, was two metres away, pointing at the cabinet; and the third, another AKG C3000, was four metres away, angled to catch the reflected sound from the control-room glass. The final audio example starts with the C414B XLS close mic on its own, then fades in the two ambience mics (panned a little left and right) until, by the middle of the example, all the mics are at equal level. The close mic then fades out during the remainder of the audio example. 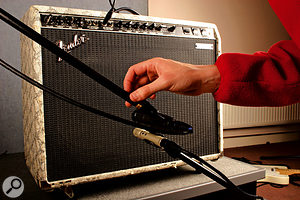 Coincident dual-mic techniques are commonly used by professional recording engineers and producers. Not only does the close positioning of the mics help to minimise problems with phase: the mix engineer is also left with plenty of control over the texture of the sound without the need for radical processing. 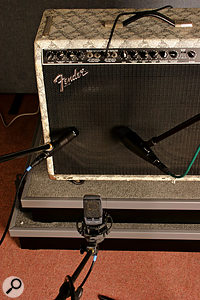 The 'phase EQ' technique: three mics (two close mics and another further from the amp) are positioned to form a triangle. The faders on the desk (or in the DAW) can then be raised or lowered for each signal. This alters the phase relationship between them and provides an interesting and, according to some producers, less intrusive alternative to conventional EQ.

Audio Examples: A Question Of Phase

In response to Bill Price's comments about matching the phase of different close mics, I lined up a Shure SM57 dynamic mic and a small-diaphragm Shure KSM137 condenser mic on axis, over the centre of the speaker cone. With the KSM137 around six inches away from the grille, I started off with the SM57 an inch further away and then moved it (while recording) through a distance of around two inches, ending up with it an inch closer to the grille than the KSM137. The third audio example combines the SM57 and KSM137 mic signals at equal levels to demonstrate the tonal changes created by phase-cancellation between the two mics.

The first three audio examples here are recordings from three mics set up in the 'phase EQ' configuration that Jack Douglas describes in the main article. For the final example I've tried to demonstrate something of the range of sounds available using only the fader and phase-invert button of each mic channel.