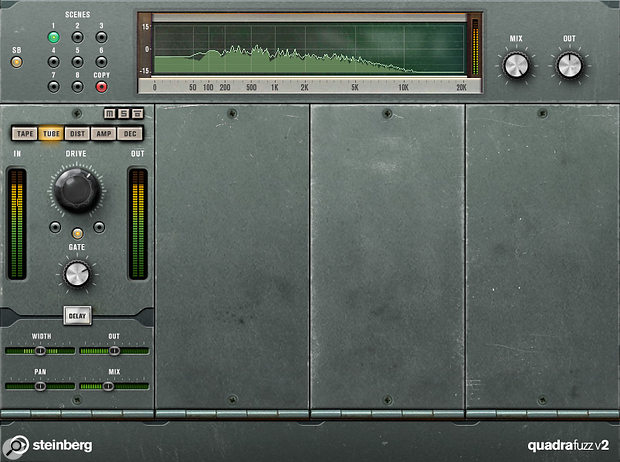 Cubase’s unique Quadrafuzz v2 plug-in is useful for so much more than guitar processing...

Many users were sad when Cubase lost its Quadrafuzz plug-in a few versions ago, but in Cubase 8 this popular little plug-in was re-incarnated — and Quadrafuzz v2 looks like it’s been working out, because it boasts both a bigger GUI and some impressive new features! It offers both single and multi-band operation, five different distortion types (Tape, Tube, Dist, Amp and Dec), gate (more on this in a minute), delay and stereo-width sections per band, and a ‘scene’ system for instant switching between complete configurations of the plug-in. So, if you only think guitar or bass when someone says ‘fuzz’, it might be time you broadened your sonic horizons — let me take you through a few examples.

Of course, guitar and fuzz do go together like Keef and Satisfaction, so it would be remiss of me not to at least mention guitar applications. Some fairly conventional ‘warm up and crunch’ guitar sounds seem a good place to start exploring this plug-in, so that’s what we’ll do, but bear in mind that Quadrafuzz v2 can run the full gamut, from gentle warming through to bee-in-a-bottle fizz.

After inserting an instance of Quadrafuzz v2 on your guitar track, click the SB button to switch from the default setting to the simpler, single-band format. This single band’s control set is the same as that in each band in multi-band mode, which makes this a good place to accustom yourself to the Tape, Tube and Amp modes, which are the most guitar-friendly choices.

In all three modes, depending on how much drive you dial in, you can go from almost transparent though to a nice, warm crunch. Small buttons beneath the Drive knob provide further options. In Tube mode, for example, they allow you to select between emulations of single-tube, dual-tube or triple-tube designs. As you might expect, by adding more tubes you add more distortion. In contrast, Amp mode offers you three different amplifier emulations — clean, crunch and lead, with progressively more overdrive/distortion in each.

So far, so simple. However, the Gate control brings something slightly less conventional to the table. It allows you to define a threshold that the signal must exceed before any distortion is applied. Very usefully, as you adjust the Gate knob, in the input level meter you can see a small orange indicator that shows the gate setting relative to the incoming input level. If you also use the Mix (wet/dry balance) slider at something other than its full 100 percent value, you can actually create a subtle, but very effective, blend of clean (dry) sound and, for the louder portions of the performance, overdriven (wet) sound; no, not quite how a real valve amp responds, but a neat option to have.

As illustrated by the audio examples I’ve created (which you can find on the SOS web site at http://sosm.ag/feb16media), Quadrafuzz v2 is great for adding just a little edge to a clean (or dare I say bland?) guitar part. However, for more tonal control, multi-band mode allows you to focus the overdrive effect on specific frequency ranges — and in the audio examples, I’ve included clips of both electric guitar and bass guitar. Indeed, used with bass sounds, Quadrafuzz’s lower-mid and upper-mid bands provide a very flexible ‘EQ+distortion’ control that can add character and help you find a place for the bass part within your overall mix.

In EDM styles crunching up drum sounds is common practice, and Quadrafuzz v2 excels at this task. The screenshot shows a full four-band configuration and illustrates some of the plug-in’s features not covered in the guitar example above. In this case, my starting point was a few stereo acoustic drum loops. The beauty of the multi-band approach with something like a full drum kit is that you can use the different frequency bands to target specific elements of the kit. In this example, I adjusted the bass band to target just the ‘umph’ of the kick, adding a little tube overdrive. However, for the other three bands, I used the Dist(ortion) mode and adjusted the bands to focus on the snare (both the lower-mid snare ‘body’ and upper-mid snare ‘crack’) and hi-hats (mostly in the high band) so I could make things sound much more crunchy. Being able to dial in different settings in each band means you can, for instance, really beat the snare sound up without the kick getting out of hand. 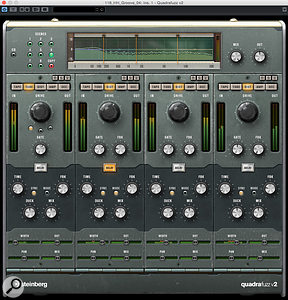 The multi-band mode is great for creatively processing a full drum kit. This screenshot also displays a few further features. First, notice that I’ve switched on the Delay effects for just the lower-mid band and configured a tempo sync’ed delay. Depending on the Time setting, you can get all sorts of trippy repeats going and, focused on a single band, the effect is much more controllable. Second, I applied some Duck to that lower-mid-band delay. No, this isn’t to add some ‘quack’ to the sound but, rather neatly, it ducks (lowers) the level of the repeats when an audio signal is present; the hits from the drum pattern therefore cut through a little easier and don’t get masked by the delay repeats.

Third, I engaged the Mode switch for the delay in the lower-mid band. This feeds the delay signal back into the distortion processing, so the repeats themselves get crunchier still. Fourth, I also applied a touch of the Width control, to enhance the stereo field of the upper three bands. This can be quite intoxicating, but as with so many stereo effects you need to check mono compatibility before you get carried away! The end result of all this processing is something that sounds far more like an electronic drum kit than the original acoustic recording. It’s a great way of squeezing out some extra mileage from a run-of-the-mill drum-loop collection.

There is yet more fun to be had by using the Scene feature. A full set of Quadrafuzz settings can be saved in one of the Scene slots (click the Copy button followed by one of the Scene buttons; the current settings are saved to that Scene). Each Scene instantly recalls all the settings for the plug-in. Once you have a few Scenes stored, you can create some dramatic ‘ear candy’ changes to your drum sounds, all of which can also be automated.

Vocals are another candidate for a bit of Quadrafuzz magic. You can go over the top for a special effect if you wish, but when used in a more subtle fashion just a touch of distortion can both add character and help a vocal cut through a busy mix. A useful starting point is to work in multi-band mode, but bypassing three of the bands: use just a single band and adjust the band cross-over points so you can focus on adding distortion to a subset of the main vocal frequencies. 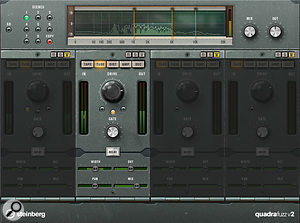 Using a single band while in multi-band mode allows you to target just a specific range of frequencies, as shown here for some vocal treatments. As shown in the screenshot, I trained my processing on the 1-5 kHz range of this specific vocal. The Tape and Tube options are perhaps the best choices for this application, and I applied a good dollop of Drive using the ‘2 tube’ option. I set the gate so that distortion is added only to the louder vocal phrases, and adjusted the Mix control so that the distortion is blended with the original, for a less intrusive result. You can add either ‘sizzle’ or ‘warmth’ in this way, as you prefer — you just need to change the frequencies the effect operates on. And, if different sections of your vocal need slightly different treatments (perhaps a bit more distortion for the high-energy chorus?), then get busy with those Scene options again.

DIY mastering should probably come with some sort of ‘sonic health warning’, but harmonic enhancement, often through real or emulated tube or tape-based distortion, is quite often applied (albeit subtly) to a final mix in a mastering context. If you have a need to perform such mastering-style processing in Cubase, Quadrafuzz can now be used alongside more obvious tools such as the Multiband Compressor and Multiband Envelope Shaper. 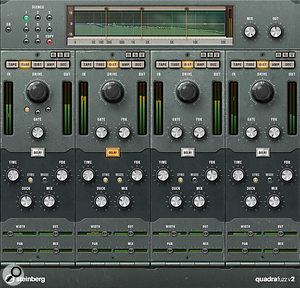 Quadrafuzz v2 can be used subtly as part of a DIY mastering signal chain to add some nice tube or tape emulation.

Just as with our vocal example above, Quadrafuzz’s Tape and Tube algorithms are probably the most appropriate options, as they attempt to create the type of harmonic distortion that we often describe as ‘warm’ or ‘musical’. As with any process used for mastering purposes, less is usually more, and the final screenshot shows a suitably restrained example.

Here, Quadrafuzz has been set to multi-band mode, but the bass and top-end bands have been bypassed to avoid unwanted low-frequency energy and top-end sizzle. Tape mode has been selected for both active bands. For the low-mids, I’ve dialled in a fairly low drive level, just to add the tiniest touch of warmth. In the upper-mid band, I’ve pushed things a little harder to add some ‘presence’ to the mix, and applied a touch of stereo widening. This may seem a fairly cautious starting point but you really don’t want to be too heavy handed. Regular use of the bypass button will help you avoid the ‘more is better’ trap, so you don’t make your mix either too woolly or too harsh.

If this were a full-on DIY mastering session you could consider how you might combine the multi-band Quadrafuzz v2 with Cubase’s Multiband Compressor and Multiband Envelope Shaper. That’s an interesting idea and perhaps one we can return to in a future workshop.