How To Integrate Modular Soft Synths With Ableton Live 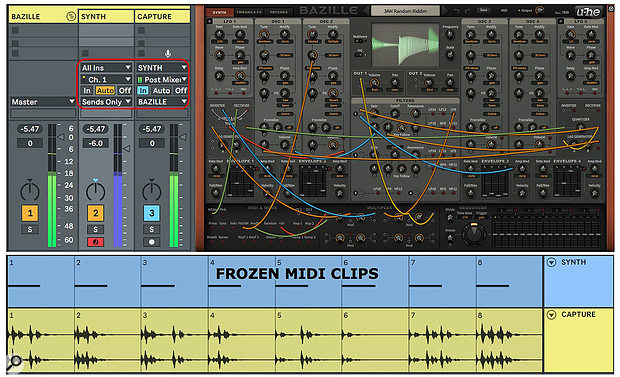 We show you how to integrate your modular soft synths with Live.

This month we'll take another look at modular synthesis in Live. In the May 2015 Live column, we covered the Max For Live modular system OSCiLLOT from Max For Cats. The December 2017 column dealt with how to implement modular techniques using just Live Racks, instruments and effects. This time we'll focus on getting the most out of the many virtual modular synths now on the market. You'll find a brief catalogue of what's out there in the 'Cable This' box.

Beyond the default setup for sending MIDI to and receiving audio from instruments in Live tracks, modular synths often require some special treatment. For one thing, they may have multiple audio outputs to which you can send different sounds from a single modular patch. For another, they may split their MIDI note inputs into separate gate, trigger, note number and velocity signals, allowing you to then cable those individually. Finally, they may provide ports for routing MIDI from their sequencers and CV modules to Live (LFOs, graphic mappers, trigger generators and so on). Exploring the in and outs is well worth the effort.

One of the best features of modular synths is their ability to generate evolving sounds that never or almost never repeat. Many synth plug-ins have control-voltage generators with aleatory modes such as Sample&Hold LFOs or sequencers with random step order, but a modular synth's ability to patch these wherever you want makes them much more useful. The downside is that once an aleatory patch generates something you like, it's gone. An easy workaround for that in Live is to route your modular synth track to a dedicated audio track for capturing the synth's output. Of the several ways to do that, I find it most convenient to set the synth track's output to 'Sends Only' (a substitute for 'Off') and to set the capture track's input to come from the synth track as shown at the top left of Screen 1 (above). Set the synth track's Monitoring mode to 'Auto' and the capture track's to 'In'. The synth will now play through the capture track, and you can record it by arming that track. Arming the synth track will allow you to play it from your MIDI controller. To record the MIDI input as well as the synth's output, arm both tracks (hold Control/Command while clicking the second Arm button).

You get three choices for the capture track's input: Pre FX captures only the instrument output, Post FX includes any effects placed after the instrument and Post Mixer captures effects as well as the track's volume and pan settings. I prefer Post Mixer because only that setting allows you to Freeze the synth track, which is often the fastest way to generate audio clips. If the synth patch is self-generating (no MIDI input required), you can simply use empty MIDI clips on the synth track —their length will determine the frozen clip length. For recording (rather than freezing), you may prefer the Pre or Post FX settings because they ignore the synth track's level and pan settings. To save this track setup for each of your modular synths, create a Track Group holding these two tracks and save it in your Live User Library.

The '3AM Random Riddim' Bazille patch at the top right of Screen 1 uses Sample&Hold to generate random rhythmic patterns that are processed by a delay effect. (Turn off the delay on Bazille's Tweaks & FX page for a less cluttered variation.) Single notes or short note phrases generate different rhythm sequences with a hand-drum like sound. At the bottom of Screen 1, eight copies of the same, single-note, four-bar MIDI clip are frozen to generate the eight audio clips shown below. Freezing all eight clips takes just a few seconds as opposed to the time it would take to record the eight clips.

Make It Your Own 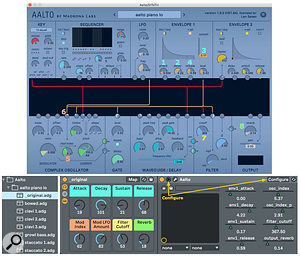 Screen 2: Eight controls from an Aalto patch are mapped to Macro knobs in an Instrument Rack. Individual Instrument Racks are then saved as different presets for that modular patch.One way to approach modular synth patches is to think of the cabling as defining a synth whose presets comprise different control settings. You can save these as standard plug-in presets, but I like to go a step further by configuring eight essential controls in the Live Instrument and then enclosing that in an Instrument Rack with the configured controls mapped to the Rack's Macro knobs. Individual presets then become separate instances of the Rack, as shown in Screen 2. With most plug-ins, configuring panel controls is simply a matter of clicking the Live Instrument's Configure button and then manipulating the relevant controls on the plug-in panel. Voltage Modular is an exception: to make a control configurable, you need to first right-click it and map it to one of 128 available automation assignments. Mapped controls are configurable as just described. That's common practice with modular instruments that allow you to add and delete modules.

Having multiple audio outputs and being able to add and remove modules in Voltage Modular or Softube Modular gives you a much larger palette. As with hardware modulars, the modules are arranged in horizontal rows, and in Voltage Modular you can save individual rows (called 'Cabinets'). Building up an inventory of Cabinets speeds up configuring full modular patches. For example, you might pair four note-generating cabinets with four sound‑module cabinets and feed them to separate Live tracks. 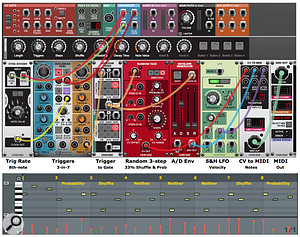 Screen 3: The Euclidean Duel module steps the Random Task device to generate three‑note sequences while randomly changing the notes or note order. The output is captured in a Live MIDI clip (bottom).Voltage Modular also includes a MIDI Out module for sending polyphonic MIDI to Live. That makes it possible to route note and CV generator patches to control other Live devices. The patch in Screen 3 starts with Sync Divider, which converts Live's standard MIDI Clock signal into triggers at the selected note division. The triggers are cabled to step the Euclidean Duel pulse generator. The Boolean Logic module converts the Euclidean Duel's pulses to gates before passing them on to step the Random Task device, which generates note patterns and has likelihood settings for changing the note order (Shuffle knob) or randomising the pitches (Probability knob). The Boolean Logic output also gates the Envelope Generator module, which is set up to produce AD envelopes. The CV to MIDI module converts the pitch and envelope outputs to MIDI notes whose velocity is controlled by the Sample&Hold LFO. The MIDI Out module sends the notes to Live.

Madrona Labs (www.madronalabs.com) have a take all of their own on modular synthesis. Aalto is built around a Buchla-inspired complex oscillator with FM, timbre and waveshaping controls. Kaivo applies the same modular design to granular and physical‑modeling synthesis.

The U-he (www.u-he.com) line of plug-ins features two cabled modular synths: ACE and Bazille. ACE, short for 'Any Cable Everywhere', runs control and audio signals at the same sampling rate (think audio-rate LFO, for example), which makes for interesting and unusual modulation options. Bazille combines FM and Phase Distortion synthesis in a patchable environment. And don't overlook Zebra2, which has no cables but is modular in spirit owing to its configurable signal path.

Cherry Audio's Voltage Modular (www.cherryaudio.com) and Softube's Modular (www.softube.com) offer full-fledged configurable modular-synth racks in software. Both come with a set of basic modules to which you can add modules of your choice. That can run up the price pretty quickly, but you get a huge array of modules to choose from. Many Softube modules were developed by Doepfer, and PSP Audioware have contributed modules to the Cherry Audio collection. Cherry Audio also offer accompanying Module Designer software for designing your own modules, should you be so inclined. You'll find a review of Softube Modular in the SOS February 2019 issue and a review of Voltage Modular is on its way...

Complex-1 is a new modular synth for Reason (www.propellerheads.com). The Reason column in the March 2019 issue has all the details, and you'll find tips on integrating Reason and Live in the September 2009, November 2011 and October 2017 Live columns.

Finally, keep an eye on Native Instruments Reaktor. Rumour has it that its Blocks architecture may be about to sprout patch chords.