Where, oh where is the new Mac Pro? If you just can't wait any longer for the upgrade, maybe it's worth considering the iMac i7...

As I write, it is 437 days since Apple last updated the music professional's computer of choice, the Mac Pro. With previous upgrades occurring around the 250-day mark, one is surely overdue. Maybe all the fuss over the iPad has kept the Cupertino elves busy but, then again, Intel's Hexacore Xeon 'Gulftown' processor (yes, that's 12 cores in a dual-processor model), reportedly slated for the new Mac Pro, won't be available in sufficient quantity until at least the end of June.

Several Apple events (the Worldwide Developer's Conference on June 7‑11th and the rumoured announcement of the next‑generation iPhone around the 23rd) might be the platform for the announcement we should all be saving up for, because if there's one thing we do know, it's that the new model won't be cheap.

Currently, purchasing an iMac with the highest specification processor (the 2.8GHz Quad Core Intel i7, with 4GB RAM and a 1TB hard drive) will set you back £1794$2199, whereas the humblest Mac Pro from the current line‑up (single 2.66GHz Quad‑core Intel Xeon 'Nehalem' processor with 3GB RAM and 640GB hard drive) costs $300 more at £1940$2499, and that's without a monitor. So unless you really need the expandability, the connectivity or the PCI slots, the iMac is surely something to consider, if you really can't wait any longer...

USB 2 hard drives that advertise themselves as 'Windows and Mac compatible' may not allow you to copy or create files larger than 4GB. This is a limitation of the FAT32 file system with which they have been formatted and, to overcome this, they will need to be reformatted as MacOS Extended.

The usual process of selecting and erasing the disk in Disk Utility (found in the Utilities folder, in Applications) can result in a 'process failure' message. In this case, the drive's partition scheme needs changing, as follows: 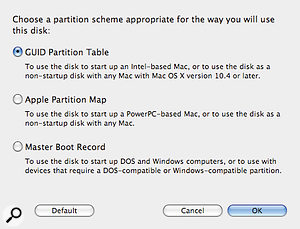 When reformatting a hard drive to MacOS Extended, you'll need to change the drive's partition scheme to 'GUID Partition Table'.

The drive should now accept file sizes larger than 4GB and will be readable on both Mac and Windows (unless you were obliged to choose Apple Partition Map).

It should also be noted that users of Mac OS 10.5 or later are able to use Disk Utility to resize partitions (and even create new ones) without erasing data, but you are strongly advised to back up all data before performing this action.

Classic hardware reborn: Propellerheads' Rebirth app ($6.99, see www.rebirthapp.com) is a highly effective demonstration of the potential of the 'i' format. Rebirth is currently aimed at iPhone and iPod Touch users and emulates the Roland TB303 bass synth and TR808 and 909 drum machines.

Inspiration station: Akai are due to release a portable MIDI keyboard with built‑in iPhone dock, called the SynthStation 25. This two‑octave controller works in conjunction with the SynthStation app to enable the user to create music 'on the move'. While the hardware is expected to sell for around £75 in the UK, the app will be available through the App Store for $9.99. The device and app will also be fully compatible with the iPad. Go to www.akaipro.com/synthstation25 for updates. 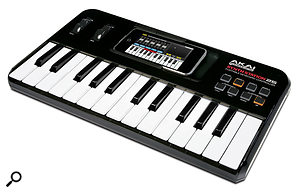 The Akai SynthStation 25 will, apparently, turn your iPhone into a music production studio.

Effects in your back pocket: Guitarists can now use their iPhone, iPod Touch or iPad as a preamp and effects processor, courtesy of IK Multimedia's AmpliTube iRig. The iRig hardware ($39.99) acts as an interface between your guitar and your iPhone, while the AmpliTube app offers real‑time guitar effects. The full version includes 10 stomp boxes, five amps and cabinets and two microphones. Though this version costs $19.99, two scaled‑down versions are available (for free, or $2.99 for the LE version). Both of these cheaper packages give the option of purchasing more effects on an a la carte basis. Go to www.ikmultimedia.com/irig for details.

Line 6 MIDI interface: Line 6 offer an interface for the iPhone called the MIDI Mobilizer, and an associated app that allows the recording and playback of MIDI data. For more details on the hardware, go to www.line6.com, and visit the App Store to pick up the MIDI Memo app for free!