Think of a 'shimmery' guitar sound, and what comes to mind? Most likely a chorus pedal. Even though it's decades old, the chorus effect can still sound extremely seductive, but it offers far more variation than you can get by simply plugging your guitar into a pedal: there are several subtle variations that are easy to try using plug‑ins, and that can sound even more impressive in stereo. Although in this article I'll be describing the effects in the context of electric guitar, they can be applied to pretty much any sound source, including vocals — but I'll leave it up to you to decide which combinations of sound source and effect are artistically valid! 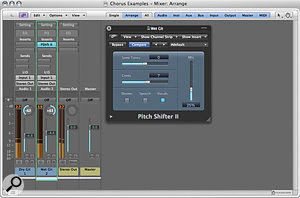 A pitch-shifter plug-in inserted on a hard-panned duplicate track can create a subtle stereo chorus effect.The traditional chorus effect works by creating an equal mix of dry signal and a slightly delayed, pitch‑modulated version of the same signal. The pitch modulation and delay creates a moving comb‑filter, which is rather like a more subtle version of flanging. Our ears perceive this as a sense of movement, sometimes with the impression that two instruments are layered together.

However, the chorus effect has a regular pulse, caused by an LFO (low‑frequency oscillator) driving the pitch modulation — and while this poses no problems for some musical styles, there are always going to be times when we'd like the repetition to be less obvious. Some plug‑ins offer multi‑voice (or multi‑tap) chorus options, so it's worth trying these first if you want something that sounds less obviously 'churny'.

One trick I discovered when playing live in the '70s, when I used two guitar amps, was to use a chorus pedal on one of them but keep the other clean. As you'd expect, you create a kind of pseudo‑stereo effect with such a setup — but what I didn't pick up on until I tried it is that the brain doesn't perceive there to be a chorus on one side and a dry sound on the other. Instead, the two sounds integrate in a very natural way, to create a three‑dimensional chorus effect that's rather more subtle than an undiluted chorus effect used on its own. You can try this very easily in your sequencing software by copying the guitar part onto a new track, and adding a chorus plug‑in to only one of the parts. You then pan the two tracks to the extreme left and right of the stereo field. 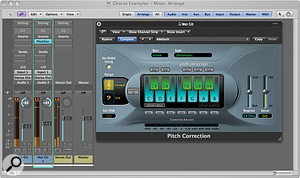 A pitch-correction plug-in on a duplicate, opposition‑panned track can also provide 'shimmer'.If you want a layered ensemble‑style effect, but without the mechanical LFO pulse of traditional chorus, try using a pitch‑shifter that's set to detune the signal by around five to 10 cents. This works fine as a mono effect with a 50:50 wet‑dry mix, but it sounds even better in stereo if you keep one side dry and the other 100 percent wet. Adding a short delay to the shifted part can also add a useful richness to the sound.

For a less mechanical‑sounding effect when processing 'single‑note' parts, such as solos, split the track as before but use an automatic pitch‑correction plug‑in (such as Antares Auto-Tune) on one side, set to a fairly slow pitch‑correction rate. The treated track will differ in pitch from the dry track in very subtle ways that follow the player's technique, creating an effect that lies somewhere between chorus and very mild tape‑flanging. Note‑bending really brings out the best in this process.

Adding a modulated delay/echo effect also creates a chorus‑like sound, though you have to keep the modulation depth very low at longer delay times, to prevent the pitch modulation becoming too obvious. However, a practical alternative is to place a standard chorus plug‑in before an echo/delay plug‑in (typically with a 150-300ms delay time, and a little feedback): the delays have the effect of breaking up the modulation pulse (especially if you use a multi‑tap delay), which can sound less obvious than a straightforward modulated delay. You could combine the two effects by using chorus before a very gentle modulated delay, set at a different LFO rate from the chorus plug‑in. Placing chorus before a reverb fed from an aux send also adds a nice swirl without your having to effect the dry signal.

You can download some audio files (/sos/jul10/articles/guitartechaudio.htm) that show the techniques I've been discussing, to see if they inspire you to add a little shimmer of your own. Once you start thinking in terms of duplicating the track and treating the two parts differently, or combining chorus with other effects that add to the overall complexity of the sound, you're sure to come up with combinations that add a bit more depth to your sound.