Digital Performer version 7.1 has been out for a while, but we're still feeling the love for some of its new features...

DP takes information about the MIDI gear attached to your Mac from OS X's Audio MIDI Setup application. You can find that in Applications / Utilities, but you can also open it any time directly from DP's Setup menu, where there is actually an Audio MIDI Setup item.

Audio MIDI Setup's MIDI Devices tab gives a friendly, visual representation of what devices are connected (or have been connected), and you double‑click the objects there to make any necessary settings. Then DP shows those same devices — in its MIDI track output pop‑up menus, for example.

That all seems simple, and it is, but DP (along with some other major applications, it has to be said) has been guilty of complicating the issue. There's some history to this, and it gets pretty nerdy, so I'm going to ignore that and cut to the chase, which is that if you're using a version of DP that's older than 7.1, you might find some of your USB MIDI devices (and MIDI interface ports) that are present in Audio MIDI Setup don't show up in MIDI track output pop‑up menus. This is particularly noticeable when you plug in a controller keyboard via USB, and you happen to have Multi Record turned on in DP's Studio menu. Because you can never select it in a MIDI track input pop‑up menu, you can never get the keyboard to work. There's a kludgy workaround involving creating a 'dummy' device in Audio MIDI Setup, which makes DP think your MIDI 'interface' has got something connected to it, and hence is a valid input source. 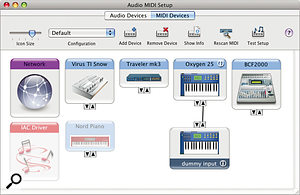 Prior to DP7.1, you often had to create 'dummy' devices in Audio MIDI Setup to persuade DP to communicate with those MIDI controllers or synths, which it thought were interfaces.

DP 7.1 sees an end to this madness, thank heavens. Now, rather than incorrectly assuming that some Audio MIDI Setup devices that look like interfaces can't possibly be a controller or a synth, DP lists them as 'Unconfigured Ports' in MIDI track pop‑up menus. You can select them, and they work! At last there's no need to have dummy devices in Audio MIDI Setup any more, so if you're still using any it's advisable to get rid of them. 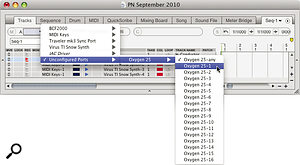 USB MIDI devices such as controllers or synths that DP previously wouldn't recognise are now selectable as 'Unconfigured Ports' in v7.1.

DP's Track Folders feature dates back to 2006 (you can read about it at /sos/jul06/articles/performertech_0706.htm if you need a quick reminder of the ins and outs). Track Folders are brilliant for organising big mixes, but doing large‑scale, 'architectural' sequence‑editing with them has sometimes felt a touch hit‑and‑miss. Would tracks in closed folders be included in time‑range selections? What exactly was happening if you made a selection directly on the folder in the Tracks window? There used to be an 'Edit Tracks in Closed Folders' setting in the Tracks window mini‑menu that was supposed to let the user choose the desired behaviour, but that was scant recompense when you'd forgotten about it and the damage was already done.

DP7.1's little track folder overviews don't half make life easier. Note how closed folders pick up the colours of tracks within, but expanded folders have an overview shown in grey.

In DP 7.1, the situation is much improved. Now, in the Tracks window, a folder shows a little graphic overview of the data in the tracks it contains. When the folder is closed, the overview picks up the enclosed tracks' colours, but when it's open, the overview goes grey. That's useful extra visual feedback when you're faced with a busy Tracks window. Even better, though, the overview is fully functional, so you can drag over it, and when you do this you're making a selection in all the tracks the folder contains.

In line with this, the 'Edit Tracks in Closed Folders' mini‑menu setting has gone. In all, it's a really useful simplification.

In the July issue of SOS, I looked in detail at the Saitara AC7 control‑surface application for iOS devices (such as the iPhone and iPad). Running on an iPad, AC7 is a serious alternative to expensive hardware options such as the Mackie Control and Euphonix MC Control.

However, if it involves you buying the iPad specially, it's by no means the cheapest option, nor is it necessarily the most robust, relying, as it does, on a Wi‑Fi link to the Mac and some third‑party freeware utilities. Various hardware devices provide Mackie Control emulation at a lower price point, and do use simple, reliable USB connections. An example is the £135 Behringer BCF2000. The downside is that they lack the displays that give such useful feedback on a real Mackie Control. However, thanks to the same DP 7.1 development that allowed the AC7 iPad app to become a reality, this doesn't have to be a problem.

LC Xview is a straightforward application by Opus Locus. Conceptually, it intervenes between DP and your BCF2000 (or other controller) and displays the same information that would appear directly on a Mackie Control on your Mac's monitor instead. If your BCF2000 is sitting underneath your monitor, then it's very much the next best thing!

Setting up is really easy. Crucially, your BCF2000 or other controller must be in a valid Mackie Control emulation mode. Then you launch LC Xview. In DP (which could be running already), go to Setup menu / Control Surface Setup. What you're looking for here is essentially what's shown in the screenshot above. You add a Mackie Control driver using the '+' button at top right, then configure Mackie Control unit so that the Input Port pop‑up shows your physical controller and the Output Port pop‑up says LC Xview. Click OK, and you should be in business, with the little LC Xview window displaying track names, status, and other info. Having done this once, you shouldn't have to do it again. 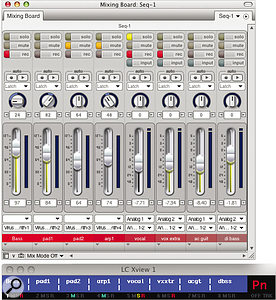 The $20 LC Xview application displays Mackie Control‑like track information for owners of control surfaces such as Behringer's BCF2000. Here its window is shown beneath DP's Mixing Board.

If you think LC Xview is nifty, you might want to check out its big brother, the $40 LC Xmu. This more complex application allows you to get in on Mackie Control‑style action even if you just have a generic MIDI controller. And if you do have a BCF2000, or even a real Mackie Control, it improves the experience by, amongst other things, allowing remapping of buttons.

Already Xview and Xmu are working pretty well with DP, but a few little issues remain, such as strange control 'echoes' when DP is set to listen to control surfaces in the background. Opus Locus are a responsive company, though, and look to be quite open to further DP‑aware development now that the features are in place that provide the necessary compatibility. Definitely worth supporting! 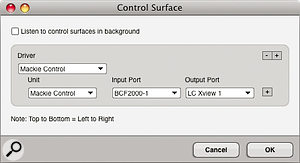 The typical settings for integrating LC Xview in DP, in the Control Surface Setup dialogue box.

PSP's warm front: PSP Audioware have long been a DP‑friendly company, and their most recent update continues the tradition of releasing Audio Unit plug‑ins with good DP compatibility. Vintage Warmer 2.5, the multi‑band dynamics processor, now comes with a useful sibling, the MicroWarmer, which promises to bring the same big sound to individual tracks, using a simpler, single‑band design, and running with low latency.

Interestingly, though, Vintage Warmer 2.5 and other recent PSP Audioware updates no longer offer the option of iLok authorisation — only PSP's straightforward user‑name‑and‑licence‑code system. Uncertainty about the smoothness of the ongoing transition to a 64‑bit OS X, and about the current security of the system, has apparently led to the decision. I wonder if we'll see any other developers going the same way? www.pspaudioware.com

Buy the book? There's no comprehending MOTU's naming scheme when it comes to new audio interface releases. First we get apparently arbitrarily​ numbered units, then MkIII designs that didn't have a MkII, and now the so‑called MicroBook! This is a tiny (9x14x2.5cm) self‑powered 44.1/48kHz USB interface that's obviously meant as an on‑the‑road solution rather than a studio workhorse. However, it still has plenty going for it, including a mic preamp with 48V phantom power, a dedicated guitar input, two extra line‑level inputs, and individual stereo output pairs on balanced quarter‑inch jack and unbalanced mini‑jack sockets, plus mini-jack stereo headphone sockets. An S/PDIF digital coaxial output mirrors the main outputs. With no controls of any kind, the whole thing is configured via MOTU's CueMix application. It seems as if the MicroBook's feature set has been well thought out, and with a recommended price of $269 it could be a solid entry‑level option that you wouldn't outgrow for a while.www.motu.com