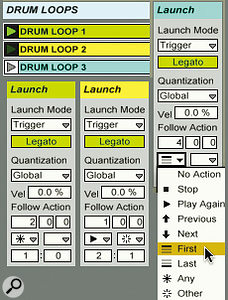 In this Follow Actions setup for three drum-loop clips, the green loop might continue playing or switch to the yellow or blue loop after two bars (Action: Any). After one bar, the yellow loop will continue playing two out of three times (Play Again) and trigger another loop (Other) one out of three times. The blue loop always plays for four bars then triggers the green loop (First). All loops are in Legato Launch Mode, which ensures that each new loop picks up at the same time position as the current loop leaves off.

The 'Follow Actions' function for clips in Live's session view offers an elegant way to implement clip sequencing and to add chance elements to your sessions. Live does not provide Follow Actions for scenes within the session view, but it's not hard to rig up a workaround. This month we're going to look at how that's done, and also explore some potential uses.

When you have a batch of adjacent audio or MIDI clips on the same track in the session view, you can use the Follow Actions section in each clip's Launch settings to change, stop, and repeat clips within the batch. You can use this, for example, to randomly switch between compatible drum loops (Actions: Any or Other), to cycle through a group of clips in the same order (Next, Previous, First and Last), or to retrigger, at regular intervals, an audio clip that is not warped (Play Again).

Follow Actions are triggered at a fixed time after a clip is launched, set in bars, beats, and 16th‑notes. You can set the time using the three numerical boxes below the Follow Action title. Select the desired action from the drop‑down menu, and you can specify two actions (called A and B), and set their relative probability with the boxes below the drop‑down menus. (For the full lowdown on Follow Actions for Clips, see the July 2007 issue of SOS.)

That's all well and good, but what do you do when you have separate tracks and clips for each kit‑piece rather than pre‑mixed drum loops? The solution is to capture all the drum tracks in a group, set up MIDI remote commands to launch group scenes, and send those remote commands from clips on a separate MIDI track. (By 'group scene', I mean all the slots in a group that belong to the same scene.) You can then use the MIDI clips' own Follow Action commands to address multiple clips in the same way as you would normally control just one.

In this Mac configuration, Live's MIDI Preferences for the MIDI bus IAC‑2 are set up so that incoming MIDI will trigger remote actions and the bus is set as an output. The MIDI track used for routing remote commands (right) is set to send to the IAC‑2 bus. Messages return as remote commands.

In order to send remote commands from a Live MIDI track, you need to route them out of Live and back in on a MIDI port that is activated for remote control. On a Mac, you can do this internally via an IAC bus, which you can set up in the Audio MIDI Setup utility. On the PC you'll need a third‑party MIDI routing utility such as MIDI Yoke Junction (free) from www.midiox.com or LoopBe1 (free) or LoopBe30 ($20) from www.nerds.de. We'll concentrate on the Mac method, but it should be easy for PC users to grasp what's necessary from these examples. A typical MIDI setup for the Mac is shown in the screen below

Once you've collected your drum tracks into a group, you need to assign MIDI notes to trigger the group scenes remotely. To do this, you first need to fold the group (using the arrow icon by the word 'group') as, for some reason, Live won't let you assign a remote command to a group scene slot while the group is unfolded. Next, create a new MIDI track and set its output to the external bus (IAC‑2 in my example).

There are several ways to use MIDI clips to manage the transitions between group scenes. The simplest is to include the routing MIDI track in the group and place a MIDI clip in each group scene to trigger the next one. Note that you can use this to trigger any group scene from any other; they don't need to be sequential. Whatever your routing bus setup, there will be a slight lag, so you'll need to send the remote command a bit early. An eighth‑note is a reliable lead time (and a 16th‑note lead usually works). For example, to trigger the next group scene after four bars, place the triggering MIDI note on the last eighth‑note of the fourth bar (position 4.4.3 in Live's notation). To keep things in sync, you'll also want clip‑launch quantisation turned on and set to an eighth‑note or greater. Global (the typical default) is usually fine, depending on your global quantise setting. 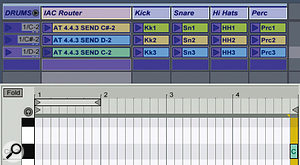 In this screen, MIDI notes C‑2, C#‑2, and D‑2 are assigned to remotely trigger the first three group scenes of the Drums group. In addition to the drum loops on the Kick, Snare, Hi-hats and Perc tracks, the group scenes include the MIDI clips on the IAC Router track. At the last eighth‑note of the fourth bar, the clips send the remote commands indicated in the clip name to trigger other group scenes.

Suppose, for example, that you've already arranged your drum and bass tracks and have recorded or imported some rhythm‑guitar, pad and lead clips to try out against them. Temporarily capture all those clips in a single group and create group scenes of combinations that work together. Then, instead of recording to the arrangement, you can use remote triggers and a MIDI clip to try out different arrangements, saving the MIDI clips of arrangements you like. Note that you can use those MIDI clips in the session or arrangement views to play your alternative arrangements. 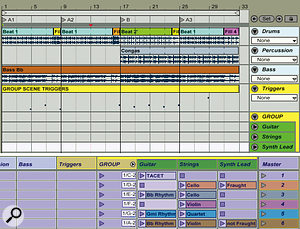 Follow Actions come back into play when you move the trigger clips outside of the group, but the setup to get what you want is not always obvious. As a simple example, suppose you want to randomly jump between group scenes at two‑bar intervals. Normally, with a bunch of two‑bar loops, you'd set each one's Follow Action to 'Any' or 'Other', trigger the first one, and be done with it. You can do that with MIDI clips that trigger group scenes, but the randomisation will start two bars late.

Actually, if you just want to randomise the group scenes, it's easier to use one trigger clip along with Live's Random MIDI plug‑in set up to randomly change the trigger note's pitch. But as soon as you want something beyond simple randomisation, you need to use Follow Actions. Let's look at a couple of examples to see what's possible.

Begin by copying the previous example but change the empty clip's Follow Action from Other to Any. Now, group scene changes will occasionally be delayed by one bar, and, more noticeable relative to the rest of the arrangement, changes will go from being on even-numbered bars to being on odd-numbered bars, or vice-versa.

For any of the real trigger clips, set Follow Action B to Prev(ious), and for the clip just above it set Follow Action B to Next. For both clips, adjust the Chance A and Chance B numerical boxes to taste (but don't set either to zero). Now you'll occasionally get a cycle of one‑bar jumps between the corresponding group scenes. It's a good idea to ensure the group clips are in Legato mode, to make sure that each new loop begins as the previous loop ends.

These are just a couple of ideas for using Follow Actions. The best thing to do is get stuck in and experiment for yourself!

Almost everything that I've described for group scenes applies to full scenes as well. The one difference is that to isolate the MIDI trigger clips from the scenes, you need to place them in scenes outside the scenes being triggered — if you see what I mean. You'll often get interesting results triggering clips with Follow Actions inside the scenes they trigger, but setting it up can be a real head‑scratcher.

My final piece of advice is this: when you're working with MIDI triggers for group scenes for more than one group, you need to keep the remote assignments separate. You can do that by assigning different notes or by using the same notes on different MIDI channels. I find it least confusing to start with the lowest MIDI note (C‑2) for Scene 1, incrementally increasing the note number for successive scenes, and then to use a different MIDI channel for each group as well as for global scenes.