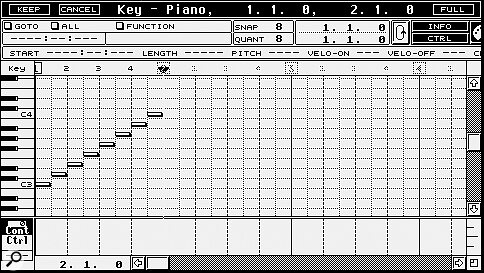 The IPS works on an existing MIDI part, such as this step‑time C scale.

The Interactive Phrase Synthesizer is one of those parts of Cubase that most of us know exist, but which few have actually used. We take a look at what it can do, as well as offering some handy tips on setting up loops and introducing the idea of controlling your computer remotely...

One of the great strengths of Cubase is its breadth — by which I mean the ease with which it can accommodate the different working methods of different users. A skilled sight‑reader, for example, can compose music in Score Edit with familiar staves and notation. A technophile dance producer can gain total control over his or her MIDI equipment by typing baffling hexadecimal strings in Grid Edit. Normal people can easily grasp the intuitive 'piano roll' interface of Key Edit, and so on.

In short, there's something in it for everyone — and regardless of your musical background and training (or lack of it), chances are it won't have been long after you first tried it that you began to figure out how to make music with Cubase in a way that made sense to you.

However, whilst this easy accessibility is undoubtedly a testament to the excellence of Steinberg's software design, it has also arguably had an unfortunate side‑effect for some users: laziness. If it's possible to sketch out ideas quickly and easily using just Key Edit and the Arrange Window, who can be bothered to spend time ploughing through pages of baffling manual in order to find out what the other, more obscure features of Cubase do? Wouldn't that time be better spent writing music?

Well, perhaps. However, Cubase has a number of features which, although non‑essential, can when used properly act as both invaluable labour‑saving devices and inspiring compositional tools. Logical Edit (featured previously in Cubase Notes) is an example of the former; the Interactive Phrase Synthesizer (IPS) is an example of the latter. 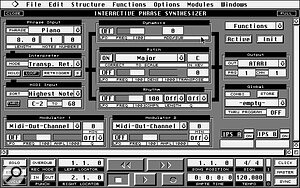 The Interactive Phrase Synth may appear confusing at first, but it's actually pretty easy to use.

Given the wide availability of software virtual instruments for Cubase VST these days, you'd be forgiven for assuming that the Interactive Phrase Synth was a synthesizer in the conventional sense, ie. a sound generator. However, in this case it's actually 'Phrase' that's the operative word. The IPS is like an unusually complex arpeggiator, which is used to generate new musical phrases and motifs by processing MIDI note data. It is a purely MIDI‑based module, which has been a part of Cubase since early versions on the Atari ST. It's 'Interactive' in that, to get the best out of it, the user must provide a fair amount of real‑time input.

To try to explain the concepts behind the IPS further at this early stage would probably just confuse matters unnecessarily, so instead let's get our hands dirty with some practical examples. First ensure that the IPS module is loaded, by selecting it from the Modules menu, and choosing Load if you are prompted. (Note: this article is written from the point of view of an Atari user running Cubase 3.1. In later Mac and PC versions of Cubase, the IPS can be found on the Panels menu, and should not need loading as a separate Module.)

Next, assign a suitable sound (let's say a piano) to a convenient track, create a Part one bar long in the Arrange window and double‑click on it to enter Key Edit. Set the Quantize and Snap values to eighth notes (by pressing '4' on your computer's keyboard), and then activate Step input by clicking on the 'foot' icon. Use your MIDI keyboard to enter a C major scale starting from middle C (ie. C3, D3, E3, F3, G3, A3, B3, C4) as shown in the screenshot, above.

Now choose Select All from the Edit menu to select all of the notes, followed by Copy to Phrase from the Modules menu (Convert to IPS Phrase on the Functions menu, in later versions of Cubase). Click OK in the dialogue box that appears. This copies your C major scale as the input Phrase from which the IPS will generate its variations. You can now exit Key Edit and delete the original Part, as it is no longer needed. Open the IPS by selecting Phrase Synth from the Modules menu (the Panels menu in later versions) and you should see something like what appears in the upper screen on page 246.

This is the IPS window. At first glance it's a little baffling, but you should be able to see the name of the Part from which you copied your Phrase (in this example 'Piano') in the Phrase Input section in the top left‑hand corner of the window. In the bottom right‑hand corner of the window are two buttons labelled IPS A and IPS B. There are actually two separate Interactive Phrase Synths, and these buttons are used to choose which of their controls the IPS window displays. Notice also that beside each IPS button there is a smaller button labelled On. These buttons can be used to switch each IPS on or off independently. A highlighted (shaded) button indicates that the IPS is on. 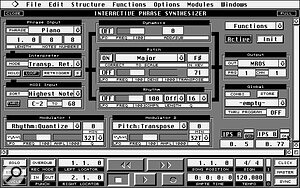 The Modulators allow you to apply LFO‑based variations to pitch and rhythm. Here, both Modulators are using a random LFO setting.

Next, click on the Init button near the top right‑hand corner of the IPS window to reset the IPS to its defaults, and click on Active to activate it. To keep things simple in these first examples, we'll just be experimenting with IPS A, so you can switch off IPS B if you like. Press and hold down middle C on your MIDI keyboard and the IPS will play the major scale from the Part you programmed. By default it will loop continuously for as long as you hold down the key. Pressing any other key will cause an equivalent scale to be played, starting from the corresponding note.

Now let's begin experimenting. Locate the Pitch section in the centre of the IPS window, and click on the button labelled On beside the dropdown menu where Major is displayed. This enables a pitch‑correction function, which forces the notes in your phrase to follow a particular scale. Of course, since our phrase in this example is a major scale anyway, the Major option will have no discernible effect. Select Balinese instead, and trigger the Phrase again from your MIDI keyboard. Weird, isn't it? Try some others; Hungarian 1 and Persian are both favourites of mine.

Of course, Pitch isn't the only parameter that we can alter. In the Rhythm section (below the Pitch section), set the right‑hand drop‑down menu (labelled 'Q') to '32T'. This changes the quantize resolution of the IPS to 32nd note triplets. Trigger the Phrase from your keyboard again to hear the difference. Try switching to dotted 64th notes ('64.') or quarter notes — you can change the resolution without releasing the key.

By now you'll be getting heartily sick of your endlessly looping piano Phrase, so let's break it up into something more interesting. The IPS has two Modulators, on the bottom row of the IPS window, which can be used to dynamically alter various IPS settings by assigning LFOs (Low‑Frequency Oscillators) to them. This is where things really start to get interesting.

From the Modulator 1 drop‑down menu, choose Rhythm: Quantize (don't worry too much about what all the other options mean: we'll cover them in more detail next month) and from the Modulator 2 dropdown menu choose Pitch: Transpose. In both Modulator 1 and Modulator 2 click where it says Off above LFO, and a menu will appear that allows you to choose an LFO waveform. Choose the 'random' one, ie. the one that looks like a jagged mountain range (see the lower screen, above). You'll notice that the values of the Transpose field in the Pitch section and the Q field in the Rhythm section start changing continuously as soon as an LFO waveform is selected.

Now turn the volume up, brace yourself and hold down middle C. Et voila! Instant terrifying 'free jazz' piano soloing, like McCoy Tyner on John Coltrane's 'Ascension'. Selecting other LFO waveforms for the Modulators restores some kind of order to the proceedings, and allows you to shape the IPS's output to a certain extent. Try some different settings in the Modulation menus to get a feel for what kinds of things they do.

If you stumble across anything interesting in the course of your experiments, you can easily record it to a track for posterity. Select MROS in the IPS's Output drop‑down menu and, provided MROS is selected (in MIDI Setup) as a recording input, you can record its output just as you would anything else.

Next month we'll learn more about what the different IPS settings mean, and consider ways to use them more strategically. Until then... Paul Sellars

One of the drawbacks of computer‑based software sequencers like Cubase is that, well... that they require you to have a computer in the studio. Even leaving aside the problems of noise and interference from CPU fans and other hardware, the simple fact is that a QWERTY keyboard and a mouse just aren't the most comfortable additions to the working environment for many people. Furthermore, in larger studios it simply may not be possible to have the computer keyboard within reach at all times.

Cubase's Remote Control function (found on the Options menu) provides a neat solution to these problems, allowing you to control vital sequencer functions (Start, Stop, Play, Record, Cycle and so on) from your MIDI controller keyboard. Typically you'll choose one key on the keyboard to act as the 'Remote Key' and then assign various combinations of that and other keys to different functions.

For example, I have my system set up in such a way that pressing C6 (the Remote Key) together with A5 on my keyboard activates record, C6 and D#5 solos the currently active track, and so on. Notes aren't the only means of controlling sequencer functions in Cubase: continuous controllers and even program change messages can be assigned! In this way it's possible to lay down the greater part of a Song all from the comfort of your favourite synth or controller keyboard. Paul Sellars

Here's a shortcut that I use all the time, and which surprisingly few Cubase users seem to have come across before. When you want to work on a short section of a song, the easiest way to do it is to set up a temporary loop around it by adjusting the position of the left and right locators, and then switching on the Cycle function on the toolbar. Of course, you can do this by directly entering the required positions of the locators, but there's a much quicker way. Simply select the desired part or parts, and then use Alt‑P (Apple‑P for Mac users) in Cubase 5.0 to set the locator positions both automatically (in some older PC versions you may have to use Ctrl‑Alt‑P).

Here's another one you may not have come across. Set the right locator to the start of a song section, and the left one to the end, switch on Cycle, and then when the song position pointer reaches this section it will skip it altogether. This is handy for trying out different arrangements. Martin Walker