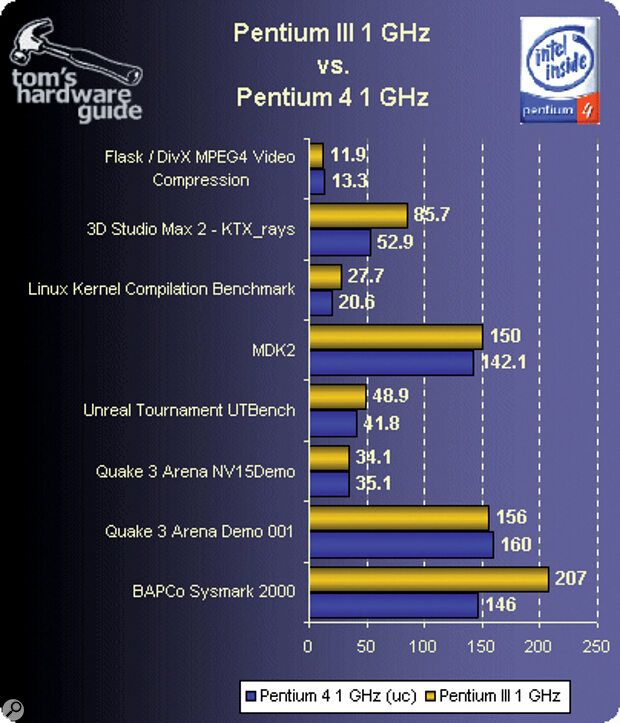 This set of results from the well‑respected Tom's Hardware web site (www4.tomshardware.com) shows that when running at the same clock speed, a Pentium III processor can often out‑perform the Pentium 4 with existing software.

No doubt most of you have now seen Intel's new Pentium 4 processor being advertised, and are wondering how it fits into the world of PC audio. The Pentium 4 was first launched by Intel on November 20th in 1.4 and 1.5GHz versions, but 1.7 and 2GHz models should also be available by the time you read this.

Should PC musicians be considering the new processor? Well, there are always some lemmings with more money than sense, who rush out and buy the latest model so that they have a computer with the 'fastest' clock speed. Unfortunately, clock speed is only one factor affecting any computer's performance, as anyone who has ever compared Macs and PCs will already know. In fact, judging by industry reports, although the 1.5GHz Pentium 4 does outperform a 1.2GHz Athlon processor when running some games and media calculations, in others it runs slower than the Athlon and even the Pentium's own predecessor, the Pentium III. One lengthy and detailed report claimed that in some circumstances a 1.5GHz Pentium 4 could end up running at an equivalent speed to a Pentium 200MHz MMX processor!

The main problem is that the new architecture of the P4 requires software to be optimised in a different way. There are 144 new SSE2 instructions that could greatly benefit audio and video applications in the future, but with existing software there's no speed advantage for the P4 over a Pentium III or Athlon processor with the same clock rate. Benchmark tests show that once the code has been specially recompiled to take advantage of the special features of the Pentium 4 it does take the lead, but that these optimisations also tend to improve software performance on the Athlon as well. In other words, any performance gain seems to be entirely dependent on software developers, and as most of us already know, it's not unheard of to wait a year or more between software updates.

Another area of concern is that while the original specification for the Pentium 4 caused a lot of excitement among industry experts, some of the planned features didn't make it into the initially released chips. For instance, the original 1Mb L3 cache, which industry experts claim would have given the P4 equivalent performance to the Power Mac G4, has disappeared altogether, while the L1 cache is a tiny 8K, compared to 32K in the Pentium III family and 128K for AMD's Athlon and Duron processors. These internal buffers are vital for speeding up internal calculations with complex data such as audio and video, and the difference in their size between the P4 and the Athlon, for example, means that the Athlon can manipulate data more quickly than the P4.

There's yet another factor to consider. Using a Pentium 4 processor entails an initial restriction to the expensive RDRAM memory, so buying one of the first Pentium 4 computers will not only fail to improve performance with your existing software, but will also cost a lot of money. In six months or so, new software versions will have been developed, bug‑tested and released, and then the cost of a P4 will have come down as well. Personally, I'd wait until then.

Intel's great hope is the Itanium, which moves beyond 32‑bit processing into 64‑bit. A 64‑bit system can address 16 terabytes of memory — four billion times more than the 4Gb that a 32‑bit system can deal with, which is perfect for those running vast Internet servers. Doubling the width of the buss also enables a 64‑bit CPU to process twice as many instructions per cycle, which effectively makes it twice as fast for the same clock speed. However, taking advantage of this will not only require a new processor and motherboard, but a new operating system and software applications — not a trivial upgrade. So, as always, when something new arrives, something else is still poised around the corner to tempt us to wait a bit longer. 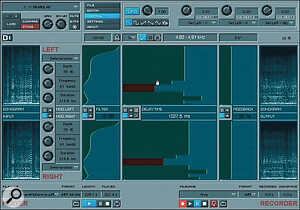 With an intriguing interface that includes sonogram displays, the Spektral Delay from Native Instruments can transform sounds in totally new ways.

For VST users everywhere, the big news is that the 5.02 update for PC has finally been released, and that it not only includes a raft of expected bug fixes, but also several completely new features. When version 5.0 first appeared, Steinberg were convinced that this major upgrade was the most bug‑free ever, especially considering its huge number of new features. However, letting thousands of eager users loose on a new version nearly always exposes some idiosyncrasies, and soon a list of bugs was confirmed, as I reported in PC Notes November 2000.

A similar situation has occurred with the 5.02 update — and, in fact, so many issues emerged within 24 hours of its appearance on the Steinberg web site that it was pulled and replaced with a first for Steinberg: a Public Beta version 5.03. This is not the same as a normal 'in‑progress' beta evaluation copy for testers, but is the official 5.02 release with some added fixes for specific bugs. As I write this at the start of February, three Public Beta versions have already been released, and each cures a small and specific selection of well‑documented bugs. Each is around an 8Mb download, available in three versions to update the VST, VST Score, and VST32 versions.

Given that these are not official releases, should you download and install them? Well, the safest answer is to visit https://web.archive.org/web/2015..." target="_blank, navigate to the latest Public Beta folder available, and download and read the small file named VersionHistory.rtf. If you are suffering from one or more of the bugs mentioned in this list of fixes, it's foolish not to remove your problem. Even if you want to take advantage of the new features that first appeared in version 5.02 (more on these in a moment), it's still best to install the latest Public Beta version to obtain the maximum number of bug fixes.

Fortunately, all Steinberg updates now have a Rollback option, and as long as you let the update create backups of all files altered during the installation process, you can reverse the whole procedure and return to your previous version whenever you like. To do this, just run the Add/Remove Programs applet from inside Control Panel as normal, but select the Repair option and follow the instructions.

I was personally pleased that the invisible Mutes and ReWire status bugs had been sorted in 5.02, but some of you may be more interested in its four new features. First, Reason owners will be pleased to hear that the ReWire protocol has been updated, so Reason's audio outputs now appear on different mixer channels inside Cubase and the two applications should run together in perfect sync.

A new Automatic Crossfade function has been added, to prevent clicks when butting together two audio segments. This used to cause problems for some users after they imported ReCycle files, but especially when looping in Cycle mode. The function is independent for each audio channel and, unlike standard crossfades carried out in the Audio Editor, is cached in RAM and doesn't change the data permanently. The Channel Crossfade function appears as two extra boxes in the Inspector for audio tracks. The 'Samples' box lets you enter a crossfade length, and 'Status' is either Off or On. You should leave it at Off unless you specifically need the new function to remove clicks, since otherwise it consumes system RAM.

Steinberg's Advanced Multi‑Processing is now in place for PC owners (see my Windows 2000 feature in SOS February 2001 for more details), so anyone who has more than one CPU and is already using Windows 2000 ought now to notice a 20 to 40 percent improvement in audio performance. There won't be any difference under Windows 95 or 98, since these operating systems don't support multiple processors.

Finally, a new collection of Priority Settings is available when the 'Expert Mode' box is ticked in Audio System Setup. Four Cubase Internal Priorities options are available to all operating systems, and these choose various schemes that alter the relative spacing of tasks such as filling audio buffers and pre‑fetching data from disk. Full access to all settings is only available under Windows 2000, when an additional Cubase Application Priority option appears. This has three alternatives. Normal 1 is the default, while Normal 2 gives exactly the same priority to Cubase, but spreads its internal priorities differently, which may help with some systems. The third setting, High, ensures plenty of processor time for Cubase VST processes, but may create unwanted side‑effects, such as sluggish mouse response and MIDI and audio driver problems. Steinberg are keen to point out that these are expert settings, and should be left well alone unless you're having severe problems.

Overall, the release of version 5.02 has been embarrassing for Steinberg. However, despite being initially angry, most Cubase users now seem to view the Public Beta versions in a reasonably positive light, since they enable serious issues to be dealt with quickly, rather than requiring users to wait for the next official release on CD‑ROM. Long may the practice continue.

Emagic have put the cat among the pigeons since Steinberg's announcement of their HALion software sampler (see last month's column), by announcing that they will be launching a VST Instrument version of their highly regarded EXS24 sampler. Now Cubase VST users will have two competing VSTi sampler products, which could (according to likely release dates) appear at about the same time.

Even more intriguingly, it looks as though Nemesys could soon have competition for their GigaSampler range, since both HALion and EXS24 VST are being advertised as able to stream samples directly from the hard drive, as well as from RAM. Emagic's 'Direct from Disk Streaming' feature will also be available to existing EXS24 owners in a free update, and this will be bundled as part of the version 4.7 Logic Audio updates.

Steinberg haven't yet made very much of this aspect of their software, with only the four words 'Direct Streaming from HD' on the HALion page of their web site, and none in the current UK HALion advert. And, of course, we have yet to see either product in the flesh (so to speak). However, when both products do appear, many musicians may be more tempted by an integrated sampler than a stand‑alone one such as GigaStudio, largely because of the ease of use and lack of conflicts an integrated sampler can offer. Where Nemesys still have a huge advantage is that they are already years ahead with their streaming sound library.

• Sonic Foundry have made the surprising move of releasing a free Beta version of Sound Forge 5.0 for user feedback. For several years now, Sound Forge has lagged behind other audio editors in not supporting 24‑bit files, but this omission has finally been remedied. The new version 5.0 also supports files with sample rates up to 192kHz, includes 20 DirectX plug&#150;ins and the famed Acoustic Mirror reverb, and offers Track‑At‑Once CD burning, CD ripping, and a new set of 'Wave Hammer' mastering tools. By the time you read this the Beta version should have been superseded by the official release.