iPad — A Great Tool For Musicians?

Is Apple's latest product simply a great lifestyle device, or is it also the next great tool for musicians?

It's finally here, but does the iPad have any serious audio applications?Photo: nDevilTV / Flickr

When Steve Jobs first announced the iPad, back in January, I have to confess that I was somewhat ambivalent. A tablet computer wasn't a new idea and Apple's latest device seemed like an attempt to further capitalise on the success of the popular App market for the iPhone. What would anyone actually use an iPad for? It's not a phone, it's not a laptop and, while there were many musicians excited by the potential of such a device, it seemed as though some wanted to find a musical use for the iPad for the same reason people climb a mountain: because it's there. So I was almost surprised, a few months later, to find myself queueing outside the local Apple Store (I live in the USA) at some ungodly hour of the morning. I had to be among the first to get an iPad.

iPad, Therefore I Am

Given Apple's reputation for design, it perhaps goes without saying that the iPad is stunningly desirable. The hardware is beautiful, taking its cue from the aluminium and glass styling that has served the company well since the launch of the original iPhone. It's about half an inch thick, but seems thinner, due to the slim edge framing the device, and, although it feels slightly heavier than you might expect, working with the iPad is comfortable. Thanks to the use of IPS technology, the 9.7‑inch, LED‑backlit display has a wide viewing angle, with crisp and vivid colours, and is truly gorgeous.

If you've used an iPhone, you'll feel instantly at home working with the iPad. If you haven't, it probably won't take more than a few moments to acclimatise yourself to the iPad version of the iPhone OS software. But what might surprise both Apple aficionados and newcomers alike is the iPad's speed. The interface feels fluid and responsive, and this is, arguably, a vital trait if such a device is to succeed.

At the heart of the iPad is Apple's custom A4 processor and, although Apple haven't discussed the chip's specification in detail, many web sites have been busy dissecting and X‑raying this new piece of silicon to uncover the electronic goodness that lies within.

According to unofficial analysis, the A4 is a so‑called SOC (System-On-Chip) that incorporates an ARM processor core, PowerVR graphics and other system‑related technologies. The ARM and PowerVR components are the same basic ingredients used in the iPhone 3GS, which means that, from an architectural point of view, at least, it might be fair to consider the iPad a bigger iPhone. However, the 1GHz A4 used in the iPad is clocked faster than anything in the iPhone, and the A4's design seems to give the iPad a more than noticeable boost in performance, without draining the battery. The iPad seems to easily fulfil Apple's promise of 10 hours of battery life, whether you're answering email or watching a movie.

So, with all of this power ­— not to mention the 1024 x 768 display resolution — does the iPad have the potential for running useful applications for music creation and production? Possibly. 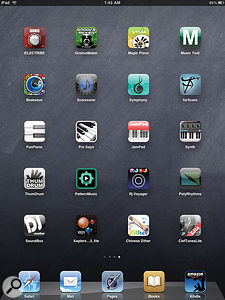 One of the more obvious uses for a touchscreen device like the iPad is as a control surface. Products like JazzMutant's Lemur, which has a touchscreen with multi‑touch capability, have been fairly popular, despite their relatively high cost. However, with the cheapest iPad starting at just $499, this could open the use of such multi‑touch surfaces to an even larger number of musicians, when coupled with appropriate software downloaded from Apple's App Store. Indeed, just a week after the iPad's launch, there are already a number of control-surface apps available. Some, such as AC7, Entrackment or ProRemote, mimic a straightforward mixer‑like surface. However, others, such as TouchOSC, offer a more Lemur‑like approach, allowing you to configure on-screen objects to your liking.

I'm not wholly convinced that the iPad will make a great control surface. For one thing, it's pretty small: the Lemur offers a 12‑inch screen over the iPad's 9.7‑inch display. Also, there currently isn't any really good way to prop up the iPad at a convenient angle for using as a control surface. What there is, of course, is a great deal of interest in using the iPad as a control surface, so maybe this will drive suitable solutions.

Another area in which developers have already been busy is apps that transform your iPad into an instrument and, while you'll find the expected array of pianos, drum kits, synths, and so on, well‑known names from the music instrument industry are also debuting virtual offerings for this new platform, such as Korg's iElectribe. Developed by the same team who worked on the DS10 synth for the Nintendo DS, iElectribe faithfully recreates the look and feel of the 2003 Electribe‑R hardware, complete with the original sound engine and sequencer. It's fantastic, and also a great deal of fun. Perhaps the most surreal aspect of iElectribe — which actually applies to many experiences I've had with the iPad — is that it is instantly intuitive, with no apparent learning curve.

Making hardware instruments virtualised for the iPad is not so dissimilar to the concept of eBooks. In both cases, there's something nice about having the hardware, but the software is, ultimately, more convenient. Although real books are great, packing more than a couple when travelling becomes a pain rather quickly. This 'soft' alternative is nothing new in the music world, of course; we've had plug‑ins for over 10 years, offering the same advantage, but the experience of having touchable instruments in a virtual format is something new and could potentially be a big deal.

To be fair, virtual instruments on the iPad also have the same big disadvantage as eBooks. In particular, you can only have one open at a time. Even when the newly announced iPhone OS4 (with multitasking) is available, you'll still only be able to see one application at a time. That's even before you consider the issues of whether the device has enough resources to multitask DSP‑intensive apps, and how you might synchronise and communicate between them.

Still, there is obviously quite a bit of scope here, and Korg have proved that the iPad can easily recreate the experience of knobs and buttons on a touchscreen. So, it's going to be interesting to see the reaction to iElectribe and whether it proves successful enough for Korg and other manufacturers to release similar products. An iPad Kaoss Pad could be fun, or an MPC, anyone? 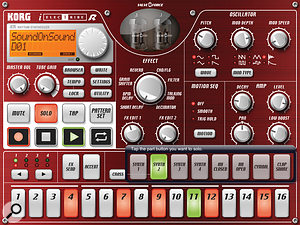 Korg have already released the iElectribe for the iPad platform, which successfully recreates the look and feel of the Electribe‑R hardware drum synth.

The initial batch of iPhone music apps are pretty phenomenal, especially when you consider that most were developed before developers even had access to actual iPad hardware. However, perhaps the million‑dollar question, in terms of iPad music software, is whether you could really create music on the iPad, and this is still very much unanswered. In the general computing world, a widely held opinion by reviewers has been that, while the iPad is great for consuming content, it's less good at creating it. However, although many areas of content creation rely heavily on text‑based input, music software is generally not one of them. When you consider what we were doing with our 32MB, 233MHz G3‑based Macs back in late '90s, the 1GHz iPad, with its reported 256MB of memory, should have no problem in offering a similar (if not better) level of performance for mobile sequencing.

Of course, music software does tend to require users to have external keyboards and other hardware, but the iPad's screen could surely suffice for certain types of real‑time control and basic step‑entry. On the iPhone, WaveMachine Labs have even managed to give the screen a degree of velocity sensitivity for their iGOG app and, if Line 6's new iPhone MIDI interface is compatible with the iPad (and suitable apps become available), this could help create the most painlessly mobile sequencing you've ever imagined.

Despite some dismissing the iPad as merely a bigger iPhone, after using it for only a few hours it occurred to me that the opposite is actually true. The iPhone was really a small iPad; we just didn't know it. However, you won't believe me until you try one for yourself. The experience of using an iPad really is magical. It's maybe the first object of its kind that is clearly a piece of technology, but doesn't actually feel like that. While the iPad might be viewed as something of a luxury today, it's not hard to see it becoming an indispensable musical tool over the next year with the right applications. Watch this space.

Apple followed their announcement of an update to the iPhone operating system with a new licence agreement for developers. This stipulates that "Applications may only use documented APIs (Application Programming Interface)... and may not use or call private APIs.” This basically means that some creators of applications that allow users to make and upload their own apps are now acting outside Apple's developer agreement.

The clause could seriously effect Adobe Flash's new flagship feature, 'Packager for iPhone', for example, in that it could render the feature redundant. Happily, though, MacProVideo's AppOmator, as featured in last month's Apple Notes, will be unaffected, as it creates 'native' (designed specifically for the iPhone platform) applications through XCode, which makes it compatible with the new terms of the agreement.

The up side of Apple's obsessive control is that the user's experience of new OS features, such as multitasking, will be consistent from app to app. Mike Watkinson