Our intrepid columnist gets down and dirty with iTunes Match, confirming that it may indeed change the way people consume music. 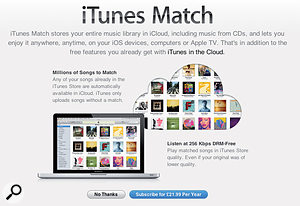 While iTunes in the Cloud allows all the music you purchase in the iTunes Store to appear on all your devices, iTunes Match does this for your whole music collection.

Apple's iTunes Match service — available in 37 countries at the time of writing — is a subscription service ($25£21.99 per year) that scans your entire music library and makes it available to all your devices without them having to store a local copy. This includes iTunes Store purchases, of course, but also music ripped from CDs (remember those?) and obtained elsewhere. Where iTunes has a track that matches one that you own, it makes a 256kbps AAC file available for streaming or download, and allows you to keep your original file. Where no match is found, your copy of the track will be uploaded to iCloud so it becomes available in the same way to your other devices. Note that this data does not take up any space in your iCloud allowance.

Since we are the kind of people who need to know, when a previously compressed track is uploaded the files will be uploaded 'as is', at up to 320kbps, but uncompressed files (AIFF, WAV and so on) will be converted and uploaded as 256kbps AAC files.

To enable iTunes Match from your Mac, go to iTunes and choose Store / Turn on iTunes Match. From your iOS device, go to Settings / Music / iTunes Match. It's likely that you will begin using the service on your Mac, as not only is that where the 'master' library usually resides, but also the initial three-step process can take a very long time! This is for several reasons: 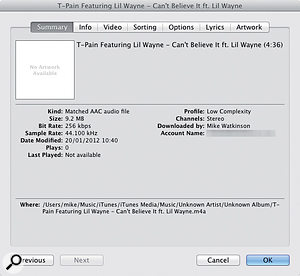 My new 256kbps version at no cost - hope they get paid...The discussion forums seem full (but when is that not the case?) of complaints that iTunes Match gets stuck on step two. My Mac was connected by cable to a 50MB/s service during the initial process, and it still faltered three times during step two. The most likely explanation for this is a loss of communication with the Apple servers, which, despite being the size of North Carolina, are doubtless under a little pressure. What's frustrating is that iTunes Match has no built-in way of telling you this, and does not appear to reinstate the broken connection by itself. Tales are rife of users waiting 24 hours while stuck at song 1106 of 23897, so my fix is simple: close iTunes, come back later, and start again.

For a library of 1260 songs, totalling 8GB in size, the whole process took around two hours on the aforementioned connection, not including the breaks in service! Interestingly, after matching, the number of items in the library was up to 1562 and it had grown in size to 9GB. Of course, if you are at all worried about the integrity of your iTunes library, back it up before subscribing!

Once matching is complete, some songs in your library will have gained a symbol in the 'iCloud Download' column. If you can't see this, turn it (and iCloud Status) on in View / View Options. Each has a different meaning, explained in the following helpful support article: http://support.apple.com/kb/TS4124.

The implications for us all as music performers, writers, producers and, most of all, owners are, as yet, unclear. What is clear is that Apple are very much in the driving seat, in terms of how music is obtained and purchased. It used to be illegal to make even one copy of purchased music, but now you're encouraged to make your music available to all your devices (and, optionally, download it to them) for a simple and relatively small yearly payment. When you rip a new CD, iTunes Match will automatically either match or upload the tracks.

But of far more relevance is how this service will affect the way in which music is acquired by what must be large numbers of people. For example, I was curious to see how it handled a track taken from YouTube. Dragging and dropping an MP3 file ripped from YouTube into iTunes caused the iTunes Match service to behave as with any track ripped from a purchased CD: iTunes matched the track in question (presumably based on metadata in the file name). In my experiment, the YouTube track was a 128kbps MP3, so to obtain the 256kbps version from iCloud I needed to select the 128kbps file and press Option-Delete. Choosing to delete the song from iTunes (but, importantly, not from iCloud) made it available to download as a 256kbps AAC file. With judicious use of Smart Folders, this could easily be actioned on all songs in someone's library that may not have been legitimately acquired.

So this is where my questions begin: do I now have a legal version of that song? And will the artist receive revenue from my iTunes Match subscription? I hope so, because otherwise we may be witnessing the end of purchased music as we know it. The optimistic outcome is that we are finally moving towards an era of subscription-based music consumption, supporting the move away from traditional purchase of physical media towards browsing and downloading. Theoretically, at $25£21.99 for 25,000 tracks iTunes Match could cost you as little as 0.1 cents0.09 pence per track. The last CD I bought cost approximately $1lmore like £1 per track, so I'm just hoping that somebody has done the maths behind it, otherwise this brave new world will last a very, very short time!