Ever thought of asking 'real' musicians to play your arrangements? Then get to grips with Logic's Score editor.

For the non‑classically trained amongst us, the Score editor in Logic often seems shrouded in mystery. Even when working with virtual orchestras, most of us will stick to the Piano Roll or Event Editors we know and love. However, there may well come a time in every musician's life, no matter what the genre they inhabit, when they will desire to incorporate the strains of strings, brass or flutes alongside their beats or power guitars. Most classical musicians aren't used to being given an MP3 and told to learn their own parts: they prefer to be presented with a readable, traditional score. And if you're paying these guys, it's even more important that those dots on the page are in the right order. While those working exclusively with notation may find specialist software, such as Avid's Sibelius or Finale, preferable, the non‑noters among us will find plenty of features within Logic Pro's Score editor to help to produce a musician‑friendly output. Mike Senior's excellent 'Great String Parts On A Budget' article in the March 2008 issue of Sound On Sound (/sos/mar08/articles/stringsinahurry.htm) is a perfect companion to this piece, outlining, as it does, arrangement techniques, instrument articulations, and how to work with classical musicians. He also has some tips for converting those dull block chords into something that will keep those same musicians awake and interested during your recording session!

For the purposes of this article, let's imagine you're scoring a four-piece string part that might usually be played by a pad-type keyboard sound, for later replacement by a real string section. Logic Pro's instruments provide several suitable timbres, so we might as well start off with the same types of sound that will ultimately appear on the track. If you have 'Open library' ticked in the New Tracks dialogue box, you'll be able to select these instruments directly from the Library. For our string quartet, we'll create four software instrument tracks and select suitable instruments from the Library (see screenshot below).

If, for example, you are scoring a string quartet, your first job should be to select suitable instruments from the Library and assign them to separate tracks.

Logic Pro's virtual orchestral instruments don't stick to the real instrument's note ranges — and not many violins have an eight‑octave range — so you may want to use the note limiter in the Inspector to set a suitable range (see screenshot, top right). Be aware, however, that the extremes of these settings are usually only obtainable by a virtuoso, so don't expect players from your local amateur orchestra to hit them. You can find traditional instrument ranges online, for example at www.orchestralibrary.com/reftables/rang.html. 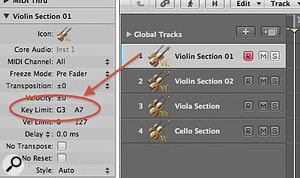 As most virtual instruments don't stay within the confines of 'real' instrument note ranges, you may want to set a suitable range in the Inspector.

There are several ways to extract the notes from a block chord to the individual tracks, which can then be used to score each string part. In the example shown opposite, there's a part consisting of chords with four notes, which we'll assign to the four sections of a string quartet: violin 1, violin 2, viola and cello.

It's important to realise that your finely crafted string accompaniment might sound perfect when playing back via Logic Pro's Instruments, but the score that's automatically generated by your input may be totally unplayable by real musicians. By its nature, traditional notation is a quantised medium. Notes are placed on beats within bars along with other notational information, such as rests, accidentals and so on, to inform a player of the nuances of the piece, so you'll need to make use of Logic Pro's extensive suite of MIDI editing commands to help create a readable score. I often work on a 'score only' copy of the Project (using the 'Save as option' in the main File menu), so I can mess around with my MIDI data to my heart's content, knowing that I still have a reference copy of the project that plays back perfectly.

Although the Score editor contains many features for editing only the display of the notation (which doesn't affect playback), in my experience, non‑readers can find these confusing, so the more work we can do in the more familiar Piano Roll and List editors, the better. Quantising notes in the Piano Roll editor will mean that there are fewer unexpected notes displayed in the score, while unintentional overlaps that are probably inaudible on playback can make the score messy and unreadable, so correct these using the Note event items in the Functions menu. You may also find it easier to work if you glue together all regions on each track into single ones. Once we have our notes on separate tracks and in the places we need them to be, we can finally open the Score editor.

Although it's tempting to select all the regions and use the Score tab on the Arrange page to access the editor, you'll gain more screen space by opening a Score editor from the Window menu. If you choose a new Screenset by first typing a number, the layout will be automatically saved. You can then select this layout at any time by choosing the Screenset of the same number. By default, the staves in the Score editor are set to the treble clef, which means that some of the instruments will be displayed out of their note-range 'comfort zones'. If you click on a stave, you can choose the correct stave type from the Style menu in the Inspector, which should cure this problem; Logic Pro helpfully provides defaults for the main instrument types.

The Inspector is also home to some other useful parameters that can help you obtain a more readable score. The Quantize parameter affects the display of the notes in the Score editor only, and can be useful to get occasional notes into line that slip through editing in the Piano Roll. The Interpretation parameter is possibly the most powerful tool in the Score editor's arsenal: when set to 'on', it suppresses any accidental short rests that could clutter and confuse the score. This parameter alone makes the biggest difference to the readability of the output. 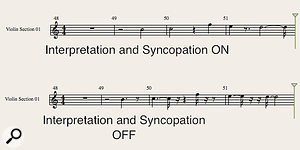 Above: the difference that the Interpretation and Syncopation parameters can make to the score display.

The Syncopation parameter makes several tied notes appear as a single note — especially useful if you've played across bars — and it can tidy up the score no end. Dragging rests into the score can also force notes into the positions you want, though micro‑managing the position of individual notes in the Piano Roll editor with the extensive range of nudge key commands is easier for non‑readers. When doing this, it's useful to choose a Screenset, open a Score editor and Piano Roll editor and arrange them on the screen so that both are visible. Then you can instantly see the effects of any changes in the Piano Roll on the Score.

Once you have something less like the tracks of a spider and more like something out of the pages of a music book, it's worthwhile printing out the score and getting the musicians who you'll be using for the recording to go over it and add their own personal annotations. Take note of any revisions they suggest: not only will they help to make the score more readable, asking for this input will also make the musicians feel that they have more of a stake in your production. When you're dealing with real musicians, you can't ignore their feelings, but then, on the positive side, they won't crash on you unexpectedly or need rebooting!