If your laptop's giving you ground-loop problems, maybe it's time to go back to battery power...

More and more musicians are relying on PC laptops. But, sadly, more and more are also running into ground-loop problems when they plug in their laptop mains power supply, connect the output of their audio interface to other earthed mains gear and then hear various unwanted 'digital nasties' in the background.

I've offered loads of advice in the past on how to solve such issues, and the dedicated thread I created on this topic on the SOS forum at /forum/showflat.php?Cat=&Number=222392 has already been read in excess of 70,000 times. However, sometimes the easiest solution for ground-loop problems is simply to power your PC laptop from its battery.

Up until a few years ago, most laptops had NiMH batteries that, for longest life, always benefitted from being fully drained before recharging. Just to confuse us, the Lithium ones found in today's laptops should be treated in exactly the opposite way.

For the longest life, you should not fully discharge them before recharging, because if you leave them fully discharged for any length of time, they may not subsequently be capable of holding any charge at all. So if you rarely power your laptop from its battery, partly drain it of power, then remove and store it. Your Lithium batteries should not be constantly trickle‑charged from the mains, either, since their charge capacity can apparently drop by up to 20 percent each year when used in this manner, and they can also catch fire if overcharged or damaged. The best approach for longer Lithium battery life is somewhere between these two extremes: use your laptop regularly on battery until it's getting low on power, then charge it up again. 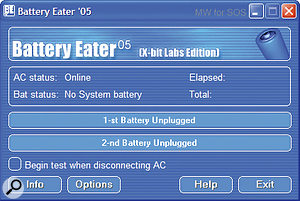 Want to measure how long your laptop battery will survive when running audio software? Try the Battery Eater bench-test utility.

Some musicians are reluctant to rely on battery power, as they are worried that the battery's life will slowly dwindle to nothing, However, there's an easy way to determine how long your battery will currently last under various load conditions. Battery Eater (www.batteryeater.com) is a Windows‑only donationware utility that can measure the operation time of your laptop battery under maximum workload (which is, after all, how most musicians use their laptops when running audio), as well as when idle and in less stressful word‑processing modes.

Still In The Fan Club?

Meanwhile, for those of us still relying on mains‑powered desktop PCs, Seasonic have recently released some new PSU models worthy of a close look. Seasonic PSUs are already extremely popular among musicians for their rock‑solid performance and reliability. I've been relying on one in my current PC for almost four years now, and have been well pleased with the very low acoustic noise levels of its fan. 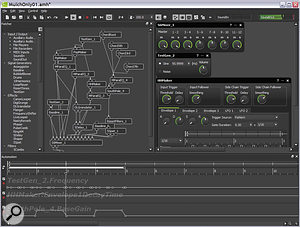 The latest version of AudioMulch offers many new features to tempt the sonic experimenter.Having said that, the Holy Grail in a studio environment is being able to abandon the fan altogether, so it's not surprising that Seasonic's X‑series fanless models are already getting a lot of attention from both commercial and home DAW builders. To design a 'noiseless' supply that doesn't overheat is tricky, but Seasonic have achieved this goal in two main ways, by first offering excellent design efficiency, to minimise the heat generated by the PSU itself and, second, by using a honeycomb‑mesh PSU case to significantly increase ventilation, and thus let warm air from inside your computer and PSU escape more easily.

The PSUs are initially available in X400FL (400W) and X460FL (460W) versions, but these wattages are probably not sufficient for the musician whose PC is stuffed to the gills with DSP cards and RAID hard drives. However, they are excellent choices for the more typical i5/i7‑based audio PC, as long as you can afford to pay the premium price: the 400W model typically retails at around £115$140, which is roughly double the price of a fan‑cooled device of similar capacity. However, these units are built like tanks, and they do say silence is golden!

Front-panel USB 3: While USB 2 audio interfaces now seem to be popping up all over the place, those who are backing up huge files to external hard drives will no doubt be pleased to hear that ASRock is the first motherboard manufacturer to launch motherboards offering front-panel USB 3 connectors. Featuring an Intel-designed 19-pin plug/socket and typically better than 120MB/second sustained transfer rate, this product finally means that users won't have to ferret about behind their PC to plug in an external USB 3 drive. Let's hope other motherboard manufacturers follow suit shortly! See www.asrock.com for more.

AudioMulch 2.1.0: Ross Bencina's incredibly flexible AudioMulch software for real-time sound creation and improvisational composition has been updated to version 2.1.0. Time signatures can now be entered in the various looping modules, rhythmic units chosen in many other modules, and there are also various new rhythmic matrix pattern editors, all of which augur well for polyrhythmic exploration. Along with new dynamics modules, MIDI device hot-plugging and various bug fixes, this latest version is a must for the sonic experimenter and is free to existing users. Check it out at www.audiomulch.com.