In the first of this two-part series, we look at the best ways to manage your day‑to-day backups in Sonar. 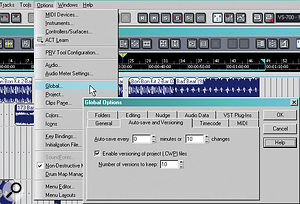 Auto‑saving is very convenient if you're the kind of person who gets so involved in your work that you forget to save periodically.

The most important item in your computer isn't the CPU or motherboard, but the data. And if there's one thing I've learned, it's that you never know when some project you did years ago will need to be resurrected. If you consider yourself even remotely professional, you not only need to save your work, but also make sure that you'll be able to use it at some time in the far‑away future.

In this two‑part series, we'll first cover the conventional way to do backups in Sonar, and in the next installment we'll branch out into the next level: archiving projects. So that we're clear on definitions, we'll consider backups to be saving your work from day to day, while archiving is 'putting something on the shelf' when you're done, which requires longevity as well as security.

First you need to know what you're backing up. The main Sonar .CWP project file contains no audio, as it's a 'roadmap' for the project — for example, paths to audio clips, where clips sit on the timeline, MIDI data, which plug‑ins are used, and so on. So, while saving this file is vital, you also need to save the audio to which it points. Also, samples used by virtual instruments aren't saved as part of the file. As long as the instrument and effects plug‑ins are installed on your computer and Sonar knows where to find them, loading the .CWP file will load the appropriate plug‑ins and sounds. If Sonar can't find these, you're in trouble, but we'll cover possible preventative measures in part two.

Sonar has three main ways to deal with the audio-file part of the puzzle:

The Bundle File. When you 'Save As' a project file, under the 'Save as Type' drop‑down menu you have the option of choosing the Cakewalk Bundle (.CWB) format. This single file incorporates everything stored in a normal project file, as well as all audio (but not video) used in the project. While convenient and portable — and a great way to transfer works‑in‑progress to collaborators — if the bundle file becomes corrupted, you lose the entire project.

Per‑project Audio Folders. With Per‑project Audio Folders, you can save all audio, along with the project file using that audio, in its own folder. Back up the folder and you back up the entire project (with the exception of plug‑in sample‑library data, as mentioned earlier). Unlike a bundle file, if one of the per‑project files becomes corrupted you can still use the remaining ones. I use and recommend the per‑project approach, so let's investigate it further.

We'll begin with some prep work. Go to Options / Global and select the Audio Data tab. Tick 'Always Copy Imported Audio Files'. This is useful if, for example, you load a loop from a CD‑ROM: that loop is copied and made part of the project audio, so that even if the CD‑ROM isn't in the drive, the audio is still available. Also tick 'Use Per‑project Audio Folders', as that automatically sets up the file structure we want: a folder for the project containing the .CWP project file and an Audio sub‑folder that holds the audio used in the project.

Now when you Save, all audio goes into the audio folder, and when you call up the .CWP file, it knows to look in that folder for its audio. Note, however, that we still haven't taken care of what happens if a virtual instrument or plug‑in used in this project is uninstalled prior to calling up the file at some point in the future. We'll describe how to deal with this in the next issue.

You can easily verify that the project file is working properly and storing the right information. Go to File / Project Audio Files to open a window that displays the path for the project folder, the project file, and the audio folder. It also shows all files that are used in the project, along with their file path, bit depth, file size and status. All status entries should read 'Local', because any audio from an external source should have been copied to the hard drive. If an entry doesn't show 'Local', you need to make sure that 'Always Copy Imported Audio Files' is ticked.

If you're using external MIDI gear — instruments, controllers, effects or whatever — you should save any presets from that gear as well. Fortunately, you can save SysEx data within a Sonar .CWP project file. This is extremely convenient, as you can then consolidate your MIDI data with the rest of the project. To do this:

Initiating a dump also initiates SysEx recording. A counter increments as Sonar receives the data. When it stops, the process is done. This data is saved with the project and available when you load it. If you ever need to recreate the MIDI setup you used for a project, click on the toolbar's black arrow to send the SysEx to the MIDI device. (You can also save the file to disk, as well as set up automatic sending of the bank when you load the project. Check out Sonar's help files for more info.)

Before archiving a project, it's worth deleting any unused files, not just to save space, but also to avoid confusion at some later date ("What's this file called "Skeezix” doing here?”). It's easy to build up a bunch of unused files if, for example, you do multiple vocal takes but then decide to get rid of all of them except the 'keepers'. This could also happen if you import lots of loops into a project to compare them with loops that are already loaded, and then delete most of the candidate loops. Because you imported the files, Sonar will dutifully copy them to the project's audio folder, where they'll stay, unless you use the Clean Audio Folder function. This scans the audio file folder of your choice and presents a list of unused files you can delete.

To use this, go to Tools / Clean Audio Folder. A dialogue box opens up that defaults to selecting the Audio folder for the current project, which is probably what you want. If not, you can browse for the folder. Tick Recurse to include sub‑folders within the project folder (although I can't envision a common scenario where you'd have these kinds of sub‑folders). 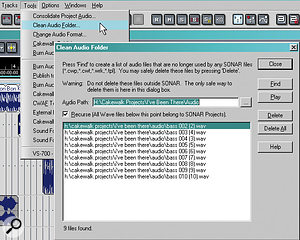 In this project, I had brought in 10 bass loops to hear how they worked with the drums, but kept only the first one. Running the Clean Audio Folder utility located the other nine loops in the Audio folder so I could delete them.

Depending on how much local storage you have, compiling the list of unused files can take a long time, because Sonar checks to make sure these files aren't used by any other projects. Once the list is compiled, you can delete individual files, or all of them. 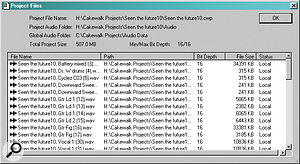 This window lets you confirm the contents of the Project Audio Files folder.

Sonar can automatically back up .CWP files throughout the course of a project. You access this by going to Options / Global, then clicking on the Auto‑Save and Versioning tab.

You can specify auto‑saving after a certain number of minutes have elapsed or after a certain number of changes have been made, but it's a good idea to do versioning — where Sonar saves successive versions of the project — as well. This is crucial so that, if you make a change you didn't want to make and Sonar saves that version, you can revert to a previous version. As .CWP files aren't very large (typically a few megabytes for medium‑sized projects), feel free to pile on the versions.

We're off to a good start on backing up, but we're not finished yet. See you next issue!