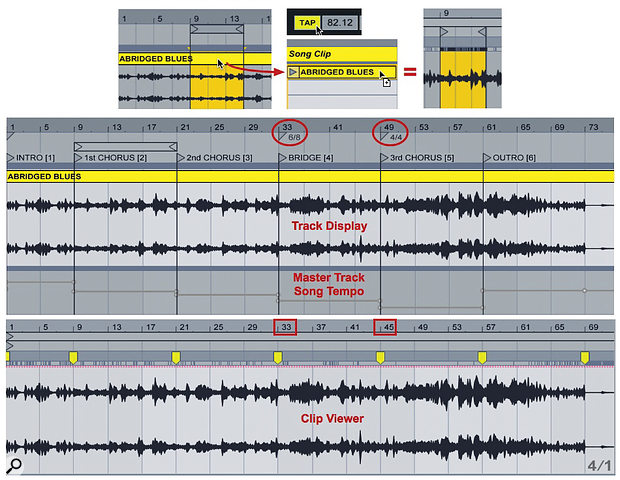 Screen 1: A looped section of an Arrangement view clip is copied to Session view and used to tap in the approximate song tempo (top). Starting with that tempo, the full clip is warped in Arrangement view (bottom). That warping controls Live’s Master tempo using Master track tempo automation (middle).

Live’s clip-triggering Session view is what most differentiates it from other DAWs and, as a consequence, Live’s more standard arranging tools don’t always get the attention they deserve. This month I’ll cover two tasks for which these tools are best suited: transcription and collaboration. Both start with timeline-based material: the song you’re transcribing or the tracks on which you’re collaborating. Session view is very handy for these processes, and I’ll mention it as needed, but the main focus will be the Arrangement view. Because of Live’s split personality, the Arrangement view does have a few idiosyncrasies, which I’ll cover along the way. For more detail on using Live’s two views, check out the March 2015 Live column.

When learning a song, there’s no substitute for repeated listening section-by-section, and that’s a good place to start exploring the Arrangement view because it only involves one or two tracks: an audio track for the song and possibly a MIDI track for recording your playing. Start by configuring a new song accordingly and drag your song file to the start of the audio track in the Arrangement view. For now, make sure Live’s warping for the file is turned off.

Next select the song file in the Arrangement view and then, in the Clip Viewer’s Sample Box, click both the Warp and Slave buttons to make it Live’s Tempo Master. Manually warping the song file will now produce Song Tempo automation on the Master track — the automation will be grey to indicate that you cannot change it manually. If the song file has been previously warped, you may not need to change any warp markers. If it has not, you’ll see one warp marker at the beginning of the file, and you’ll need to add warp markers to align the sections of the song with Live’s Beat Time ruler. If the song has a rubato introduction, as in Screen 1, play it from the beginning, create a new warp marker at the first beat after the intro and drag it to the closest bar line. Place Arrangement view Locators at the beginning of the song and at the bar line corresponding to the new warp marker, and label them to suit. Start the song playing at the second Locator and find the beat that begins the next section. That might be a few bars that you’re trying to learn or a logical song section like a full chorus. Place another warp marker at that beat and then move it until the new section encloses the correct number of bars. Insert an Arrangement Locator there and continue in that fashion until the end of the song file.

You can now loop sections between Arrangement view Locators for transcribing or practicing. Screen 1 shows the process for a blues song with a bridge imported directly from my iTunes library. Notice that the time signature changes at the bridge, and thereafter the bar numbers in the Clip Viewer and Arrangement view’s Beat Time ruler don’t match. The reason is that clip view doesn’t support time signature changes. But that doesn’t matter because the song file is the tempo Master and playback is, therefore, unaffected.

By collaboration I simply mean starting with a batch of stems (the audio files that comprise an arrangement) and editing that arrangement in Live. The stems might come from the user of another DAW, from a commercial construction kit or remix library, from you using other hardware or software, or from any number of other sources. You might even breathe new life into an old Live project by rendering its tracks as stems and reworking those in a new Live project. (To create stems from a Live project, select ‘All Individual Tracks’ from the top drop-down menu in Live’s Export Audio/Video window.) Here are four tips for when working with stems: 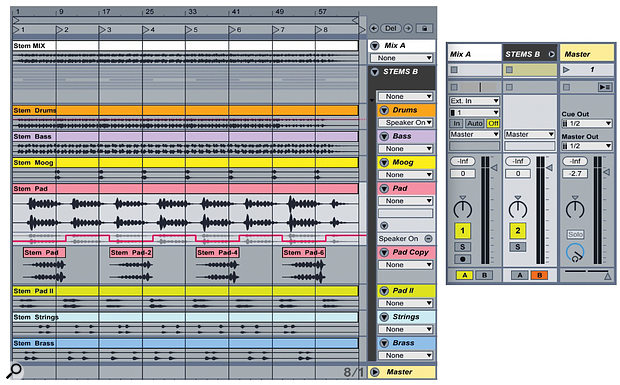 Screen 2: Here the Pad stem is copied and modified. Speaker-On automation for the original Pad stem avoids overlaps. Crossfading between the original mix (top) and the Stems Group lets you compare the two versions.

In what follows, I’ll assume that all the stems are the same length and in sync. To get started, load each stem at the beginning of its own Arrangement view track. As long as you don’t warp any of the stems, changing Live’s tempo and time signature won’t affect playback; it will simply change the relationship between the stems and Arrangement view’s Beat Time ruler. You can usually use the method described in the previous section to match the Beat Time ruler to the stems by finding a stem in which the rhythm and tempo are obvious (typically a percussion track), manually warping that stem (and none of the others), and then setting that stem as the tempo Master.

When you need to physically edit a stem, make a copy of the track (Cmd+D/Ctrl+D) and then mute it or use Speaker-On automation to silence sections as needed. This makes it much easier to revert to the original. In Screen 2 the pink Pad stem was copied and sliced, alternate events were deleted and the remaining events reversed. Speaker-On automation on the original track eliminates overlaps between the two tracks. Note that you can cut, copy or paste automation without affecting the underlying clip by doing so on a separate automation lane.

When you record or overdub MIDI parts in an Arrangement view loop, each pass is recorded as a separate ‘take’ (see Screen 3). When you stop recording, the last take is looped, but you can move the clip’s loop brace to choose the best take. If you activate Arrangement view’s MIDI Overdub button (next to the Record button), each take is added to the last. If you play nothing during the first take you’ll be able to easily start over. If your computer keyboard is handy, you can even undo (Cmd+Z/Ctrl+Z) during a take without stopping the overdub process. 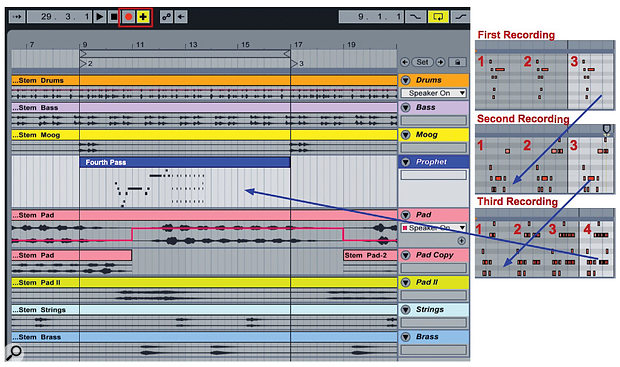 Screen 3: A MIDI track is inserted below the Moog track to add a synth lead. The first pass is recorded without overdubbing, whereas the next two are recorded with overdubbing.

Once you have your stems or transcription master partitioned with Arrangement view Locators, it’s a simple matter to convert sections to Session view Scenes. Right-click the Locator beginning the section, choose ‘Loop to Next Locator’ from the drop-down menu, click the Loop brace and then choose ‘Consolidate Time to New Scene’ from the Create menu. When you return to Session view, you’ll see the new Scene holding clips spanning just the looped material. You can now play and alter those clips as well as record new material on other tracks. Master track tempo automation will apply unless you override it, which you can do by right-clicking on Live’s tempo. You can then enter the tempo in the Scene name to have it set automatically when you trigger the Scene.