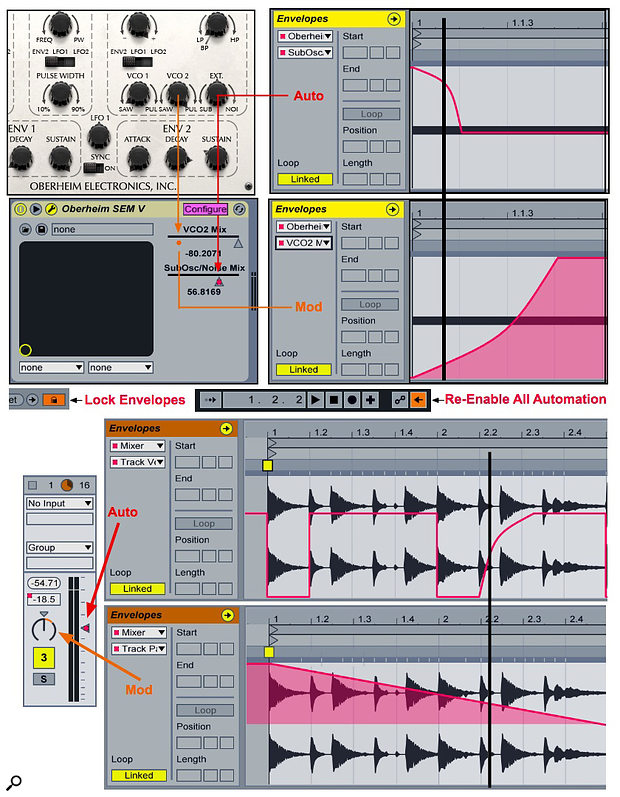 Screen 1: At top, the Oberheim SEM V VCO2 and Ext mix knobs are configured as Live device sliders, and VCO 2 is modulated while Ext is automated. At the bottom, Live mixer volume is automated while pan is modulated.

We look at the different ways in which you can animate parameters in Live.

Live offers three ways to animate mixer and plug-in device settings: MIDI Control Change curves (covered in the September 2015 Live column), automation and modulation. The difference between the last two is that automation takes full control of the targeted parameter, whereas modulation adjusts it relative to its current setting. Automated controls are marked by a red LED and move as they follow the automation. Modulated controls indicate the offset from the current setting using an orange LED for sliders and an orange outer ring for knobs. This applies to all Live devices as well as third-party plug-ins, but for the latter you must first configure their controls as Live device sliders, as shown in Screen 1.

You can move controls that are subject to automation or modulation. With modulation, moving the control simply changes the modulation starting position. On the other hand, moving a control disables automation. You can re-enable it by right-clicking the control and choosing Re-Enable Automation from the drop-down menu that appears. Alternatively, clicking the Re-Enable Automation button in Live’s transport re-enables disabled automation for all controls. Here are five things to remember when working with modulation and automation:

Modulation is usually the best choice for curves that need to align with clip data, be it MIDI or audio. Modulation also lets you adjust or even automate the modulated control while preserving the modulation. On the other hand, when you’re working with control changes that follow the arrangement (overall volume contour, for example), use automation. Automation in multiple track lanes is also visually clearer.

You can use modulation for a variety of utilitarian tasks, but it really comes into its own as a way to add variation to repeating MIDI or audio clips by modulating instrument and effects settings. In some cases you’ll find modulation targets on the Envelope editor’s Control Chooser drop-down menu, but most of the time you’ll need to choose the associated automation envelope and then right-click in the envelope editor and select ‘Show Modulation’. Here’s an example using modulation to reduce randomness in Live’s Beat Repeat audio effect.

Beat Repeat is one of Live’s most versatile rhythmic audio effects, but it can also be hard to tame. You’ll find full coverage of Beat Repeat in the December 2010 Live column, but in short, Beat Repeat grabs a chunk of audio at regular intervals as set by its Interval and Offset controls. The size of the chunk to be grabbed is set by the Grid control and the time for the whole process (grab and repeat) is set by the Gate control — if Gate is smaller than Grid, nothing happens.

Beat Repeat’s Chance knob sets the probability of each grab: at 0 percent it never happens and at 100 percent it always happens. At other settings, the grab will happen at random with the probability shown in the setting. If you want the effect only occasionally, but you want to control when, set Chance to 100 percent and then modulate it to 0 percent when you don’t want the grab. The top right of Screen 2 shows four 16th-note intervals with 100 percent Chance in a four-bar clip. During those four ‘on’ intervals, a 16th note’s worth of audio is grabbed and repeated for the remainder of the gate time — three repeats in this case. Changing the Gate setting affects the number of repeats, whereas changing the width of the modulation bands affects the number of grabs. Play with the Interval, Offset, Grid and Gate knobs, and you’ll quickly get a feel for it. At the bottom right of the Beat Repeat panel you’ll see three output options: Mix, Ins and Gate. Gate is used in Screen 2 to better illustrate the generated repeats. In practice, you’ll more likely want Mix or Ins mode. 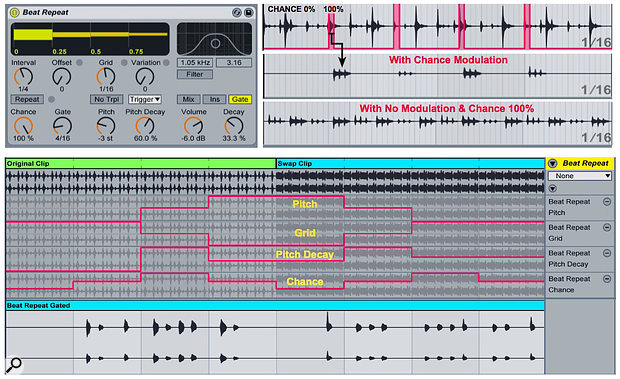 Screen 2: Beat Repeat is used to echo selected events in the audio clip at top-right. The red modulation spikes select the events to be repeated by changing the Chance setting from 0 to 100 percent. Arrangement view automation can add variety (bottom).

You can add a little randomness back into the process by reducing the level of some or all of the modulation intervals. Beat Repeat will still only grab audio during the ‘on’ intervals, but now it will also miss some of them because their Chance setting will be less than 100 percent. You’ll get a similar result by automating the Chance knob while leaving its modulation as is. Beat Repeat’s Grid knob is another good modulation target. The Variation knob to its right randomly tweaks that knob, but leaving Variation at 0 and modulating the Grid knob instead lets you choose the repeat rate.

Once you have things set up to your liking, you can use that setup with other audio clips by dragging them from Live’s Browser into the current clip’s Sample editor. You can also save the clip in your Live library for later use as a Beat Repeat template — when you drag it back to an empty Live track, Beat Repeat and all its modulation will be intact. The only difference when working with MIDI clips is that, rather than dragging in a new clip, you need to delete the notes in the original clip and then copy and paste notes from the new MIDI clip.

Automation is the way to make mixer settings follow the song’s timeline irrespective of the clips on a track, and it is the only way to automate parameters on Return, Group and Master tracks, which do not hold clips. As mentioned, Arrangement view’s Lock Envelopes button prevents automation from being disturbed when moving or pasting clips.

Recording automation in Arrangement and Session view is enabled with the Automation Arm button; when not activated, automation does not get recorded. When activated, three additional buttons — Session Record, Arrangement Record and Track Record-Arm — determine what actually gets recorded. Screen 3 (below) shows the details. 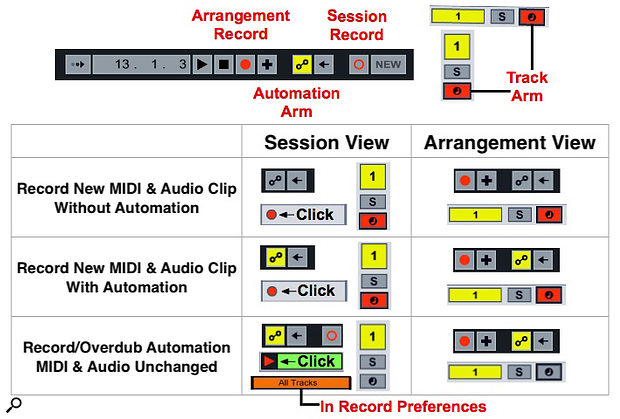 Screen 3: The labelled buttons at the top are all integral to recording automation. The table below shows the configuration options for recording data or automation or both in Session and Arrangement view.