DJs can really get clever with Ableton Live. We explain how. 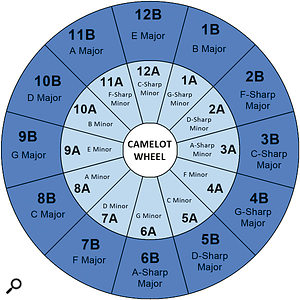 This is an example of the Camelot Wheel, which can help you find harmonically compatible keys quickly and easily for Harmonic Mixing purposes.

In our first article about DJ'ing with Ableton Live (in the July issue of SOS), we covered the basics of putting together a DJ set that largely resembled the traditional 'two decks and a mixer' setup in Ableton Live. But to only do this would be to seriously under‑use the facilities available to you as a DJ! Live is capable of so much more, so this time around we'll take a look at a couple of things Live can do that would be difficult, if not impossible, with a more traditional DJ setup.

The principle behind harmonic mixing is simple: if you play songs that are in the same or harmonically related keys, your mixes will sound much smoother. If you're classically trained, related keys will be second nature to you, but even if you have a limited knowledge of musical theory, you won't have to spend hours studying to be able to start using this idea.

To start with, you'll need to know the key of each track. To work this out, you can either use your ears and musical knowledge, or (possibly more quickly and easily) use a program such as Mixed In Key (www.mixedinkey.com). Once you've worked out the key of a track, it can be very useful to rename the file to include that information; for example, 'A minor: Cool Band: Great Track.MP3'. If you put the key at the beginning of the file name, it will also help you when searching for tracks, as all tracks in the same key will be grouped together when you sort the folder alphabetically.

To help us to figure out which keys are related, a very kind chap by the name of Mark Davis has invented something called the Camelot Wheel (named after the round table from Arthurian mythology: see image above). The principle of the Camelot Wheel is very simple. Each sector of the wheel has an inner and outer key: the inner and outer sections are simply major keys and the relative minor keys, and each sector contains a key pair, one for each note from C to B. (See the 'Welcome Relatives' box for more information on musical keys in general.)

Using this wheel, and the simple fact that any adjacent sections of it should produce a smooth-sounding mix, we can start to put together mixes with comparative ease. If, for example, we were playing a song that was in E-minor, a quick look at the wheel would show us that we should choose a song that was either in E-minor (obviously!), B-minor, A-minor, G-major, D‑major or A-major (the last three being the relative major keys of the first three).

Now, all of this is possible with a conventional 'decks and mixer' setup, but you would most likely not be able to change the key of a song. In Live, you can actually transpose the songs (within reason of course). If you were playing a song that was in G-major and the next song that you really wanted to play was in E-major, that might be a problem with normal decks, but with Live you can simply transpose the next track down by two semitones, to change the key to D-major, and you're all set! 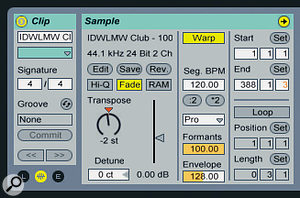 If you know the key of a song you want to play you can use the Transpose option in the Clip Properties box to shift the key, within reason, to make Harmonic Mixing much easier.

In my last article about DJ'ing, I touched very briefly on the practice of setting up a loop at the end of each track to act as a kind of safety net, preventing tracks from finishing before you've mixed in the next track. But the creative DJ can take this idea further... much further. As you know, on each track in Live there are a number of 'slots'. In the last article, we looked at inserting songs into two of these slots, each one functioning like a traditional deck. This time around, we'll use a separate track for each song. This will result in a more complex session in Live, and will require a little more planning, but the results can be spectacular. Feeling up to it? Then let's get stuck in!

Start by creating a new audio track (Ctrl/Apple‑T) and loading a song into the first slot. Assuming that it's correctly beat‑mapped and trimmed for start points, we can quickly set up a loop at the end of this song (the safety net again) and this clip then becomes the full song, which we can play as we would normally play a song. However, if we then make a copy and paste the copy into an empty slot, we can start to get creative...

On the second clip, set different start and/or end points. In essence, we're going to cut sections out of the main song as different clips: for example, we could start by taking the intro section, then make another clip copy of the whole song but this time set the start and end points to use only the first verse. A third clip could use just the first chorus (perhaps with that whole section set to loop). A fourth clip could then use the second verse, and so on. Eventually, we'll have a set of clips (in addition to the 'entire song' clip) which, when played in sequence, piece together to form the whole song again but which, because they are separate clips, can be re‑ordered, looped, and otherwise messed about with.

All of this can be done using just a mouse, but there are now a number of USB controllers designed for use with Live that have a matrix of buttons, which can be used to trigger clips on individual tracks in Live. One of these, the Akai APC40, has a matrix of eight rows of five buttons. This enables you to start the first five clips on each of eight tracks. If you had more than five clips on any given track, you'd use the Bank Select buttons to move up or down the clips and left or right across the tracks.

To be able to use this approach most effectively, it makes sense if each song is cut into clips in a consistent way. For example; whole song, intro, verse one, chorus one, verse two, chorus two, breakdown, chorus three, outro, and so on. If you try to break down every song you play in this way, you have an idea of what each button on your controller represents simply by knowing its number.

Once you get used to this setup, you can easily create a Live session with literally hundreds of songs pre‑cut and edited and ready to go (there is no limit to the number of audio tracks you can have in Live 8). Then, when you're playing your set, you simply scroll across to the track you want to play next, assign it to the relevant side of the crossfader (A or B — see the July DJ'ing article for more information on this), make sure you have the correct track selected and you're ready to go!

This technique really opens up the creative possibilities for your sets, because you can extend tracks or re‑edit them literally as you go along, in response to the reactions of the crowd. As an example, this technique makes it child's play to repeat a chorus for longer if the crowd are really into it. Conversely, if the crowd don't seem to be reacting that well to a song, you could do a live edit of it that skips a section, so that the problematic song finishes sooner and you don't have to try mixing out over a section of it.

Just The Tip Of The Iceberg 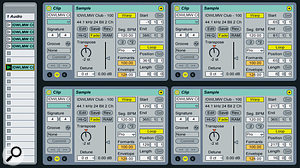 Here you can see a number of different copies of the same song loaded beneath each other in an audio channel. Each copy can have different start, end and loop positions stored, and each section can then be triggered as you wish, to enable live remixing by changing the playing order of the sections.

Once again, I feel we've barely scratched the surface of what is actually possible for the creative DJ with Ableton Live. We haven't even touched upon the numerous Live effects plug‑ins that can be used to re‑order, distort, effect and otherwise mangle the songs you're playing. There are also clip envelopes that can be used to provide more controlled manipulation of the audio (see the Live workshop article in the February 2009 edition of Sound On Sound for more details). There's also the possibility of setting up a whole library of your own drum or percussion loops, or even musical parts (as audio or MIDI data), which you can then use to layer over the top of the songs you're playing.

Live 8 truly represents a brave new world for the DJ of today, so remember to have fun, experiment, get creative, and see where Live 8 can take you and your crowd next time you play!

For those that don't know this already, every musical key has another 'relative key'. These are relative minor keys if you are currently using a major key, or relative major keys if you are currently using a minor key. This is pretty easy to understand if you look at the key of C-major and its relative minor key of A-minor. Examining the notes that make up C-major on a piano keyboard, we can see that the sequence runs C, D, E, F, G, A, B, C. If we then look at the notes that make up A-minor, we can see that the sequence runs A, B, C, D, E, F, G, A. Although the scale starts on a different note, the notes used are actually the same. So any song that is in A-minor will be using the same actual notes as a song in C-major and vice versa. This principle applies to every major key and every minor key. The difference between A-minor and C-major is purely one of 'feel'. A song in a minor key will feel more sombre than one in a major key but, from a DJ point of view, the two would mix together quite easily.