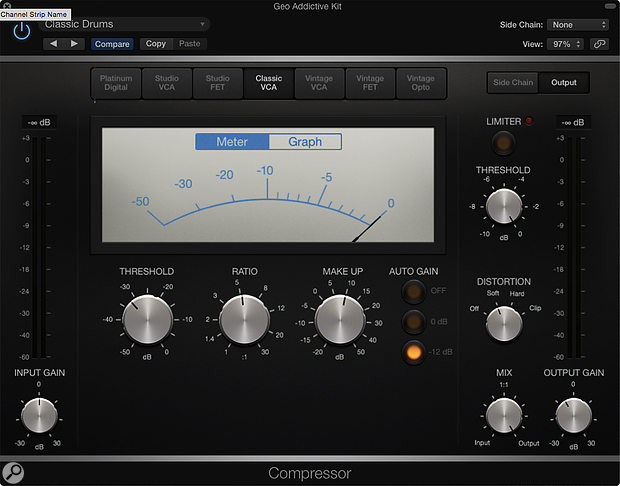 Screen 1: The new Classic VCA compressor model. Here, I am using the make-up gain parameter to drive the Distortion section.

The Compressor plug-in got a new interface in Logic Pro’s 10.1 update, and there’s more to it than meets the eye.

In this article we are going to explore some of the workflow and feature enhancements that have been made to Logic’s Compressor plug-in. Firstly, the Compressor’s GUI has been updated with a new scalable, Retina-ready interface that improves the overall ergonomics, and the compressor models that are being emulated are more clearly themed.

A Portion Of Distortion

We will begin by looking at compressing drums. Start with a drum loop. I have created mine (Audio Example 1) with virtual–drum plug-in Addictive Drums (see the ‘Audio Examples’ box for info on how to listen). You will see a gain–reduction meter at the top of the channel strip underneath the Settings box. Click on this to open an instance of Logic’s Compressor plug-in in the first available insert slot. Double click on it to bring up the plug-in’s GUI. Let’s use the new Classic VCA compressor model to add punch and additional body to our drums. Go to the Compressor’s preset menu and load Drums/Classic Drums. The preset uses the new Classic VCA compressor model which is a heavy nod to the dbx 160 hardware compressor (note the lack of attack and release controls). Adjust the threshold until you are applying around 10dB of compression (Audio Example 2).

Now let’s dirty things up a bit. Logic’s Compressor has a built in Distortion parameter with four states — Off, Soft, Hard and Clip — that dictate the type of distortion. To increase the amount of distortion first drop the output gain to -20dB to give you some headroom, now raise the make–up gain knob to +20dB. As you raise the make-up gain notice that it drives the distortion circuit harder. While you are applying the distortion try switching through the different algorithms to give yourself an idea of their tonal qualities. To get a gentle break-up effect on the drum loop I settled on the Soft Distortion model and a make–up gain of 10dB which adds a subtle distortion effect (Audio Example 3). 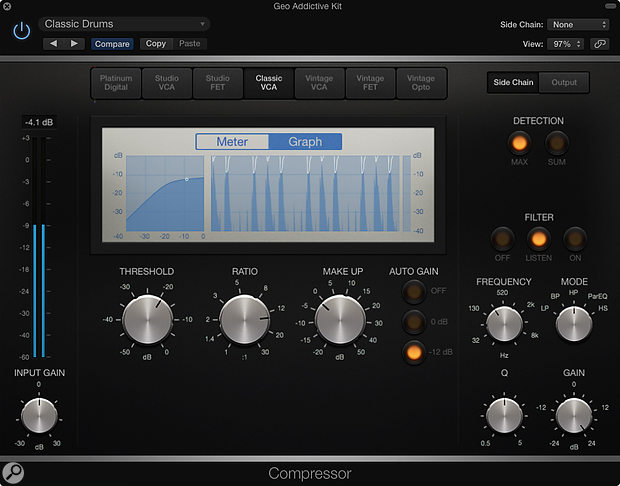 Screen 2: The side–chain section of the compressor is used to filter the kick drum so that it triggers less gain reduction than the snare. Here, I am using the graph display to give me visual feedback on how much gain reduction is applied to each drum hit, and the side–chain filter’s Listen function to audition the filtering.

Another technique that is really easy to experiment with is parallel compression. Using the same preset as before, tweak it to add an extreme amount of compression by raising the ratio control to 20:1 and lowering the threshold. Now add a touch of distortion as described previously. Next, go to the Mix control and turn it fully to the left so you are just listening to the dry input signal, then with the drum loop playing, slowly move the Mix control towards the right (Audio Example 4). You will probably find a position around the 10 percent mark that adds extra sustain to the drums yet still preserves the initial character. In the right situation this can be a really useful mixing technique.

On the Compressor click the Side Chain button to reveal its parameters, go to the Filter section and click on the Listen button; you are now listening to just the Side Chain signal path. Set the Mode parameter to HP, which stands for high-pass filter, and raise the Q to 1.60. Next, sweep the Frequency parameter up until the amount of compression applied to the kick drum is reduced but the amount applied to the snare drum remains unchanged — I found a value of 260Hz worked for me. Now switch the meter section to Graph. The waveform display will give you really clear visual feedback of how much compression is being applied and to which drum hits. Your results will vary according to the frequency content of the individual elements of the drum loop. Once you have achieved the desired result click the Filter to On so that you’re no longer listening to the Side Chain section but are now listening to the compressor with the Side Chain filter engaged. Experiment with the other filter types to focus the compression on different drums.

You often read about engineers applying compression to try and achieve an aggressive and upfront vocal sound. When attempting this yourself, it’s good to be aware of how different Attack and Release settings may affect the amount of distortion the compressor is adding. I recommend that before we go about compressing a vocal, we first of all pass a test tone through the different compressor models to highlight the differences at more extreme settings. Open a new audio track and turn your monitor or headphone output right down. Go to the Channel Strip of that channel, add the Test Oscillator plug-in, and open its editing window. Set the waveform to Sine Wave, bring the output up to a comfortable level and adjust the frequency to something more palatable (I set mine to 100Hz). Next, add an instance of Logic’s Compressor and set the threshold to -30dB, the attack and release to 0 and the Ratio to 12:1. These settings will give you around 20dB of compression. 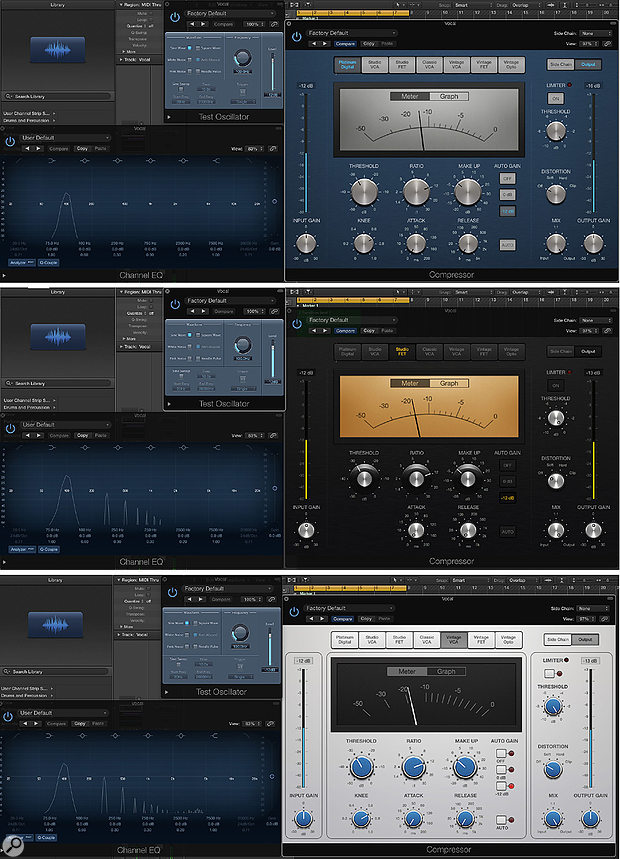 Screen 3: At extreme attack and release settings, different compressor models will generate significantly different harmonics. This can easily be demonstrated with a simple test tone.

Now comes the interesting bit. Add Logic’s Channel EQ after the Compressor and turn on the Analyzer. You can now step through the compressor models and see and hear how different models generate different harmonic content with these settings (see Screen 3). The Vintage VCA model gives a particularly striking spectrum. Now go to the Studio FET model and increase the release parameter and notice how the extra harmonics generated by the Compressor start to decrease; you will see the same thing if you raise the attack parameter. You should be aware that certain models, given very low attack and release times, will introduce extra harmonic content and have a tendency to distort, brighten or thin out your source material, depending on your interpretation. You can hear these differences in Audio Example 5.

Now let’s work with a vocal. Bypass the Test Oscillator and Compressor plug-ins and record or add a vocal. Play your vocal track to familiarise yourself with its timbre without compression (I have used Audio Example 6). Engage the Compressor plug-in and set the model to Studio FET, the attack and release times to 0 and the ratio to around 15:1. Play your vocal track through the Compressor and tweak the threshold so you are applying around 15dB of compression. The effect can be heard in Audio Example 7. Notice how the vocal now has a slightly distorted quality to it. Listen to the how the audio example supplied sounds thin and harsh. We can reduce the harshness by changing the Attack to 80ms and the Release time to 20ms. Listen to Audio Example 8 to hear the effect. You may have to adjust the Threshold parameter to achieve a similar amount of compression. Once you become accustomed to the distortion characteristics of a particular compressor, you can start to identify the artifacts you’re listening for in order to avoid or embrace a distorted vocal sound.

There are some other ways to reduce the more obvious artifacts introduced by heavy, fast compression. For example, try adjusting the Mix knob so that you are adding the compressed signal to the dry signal, or applying the equivalent gain reduction using two instances of the same compressor, but adding slightly longer attack and release times and a lower ratio setting on one instance.

To hear the effects of the techniques outlined in this article, head to this month’s Media homepage: http://sosm.ag/mar16media.