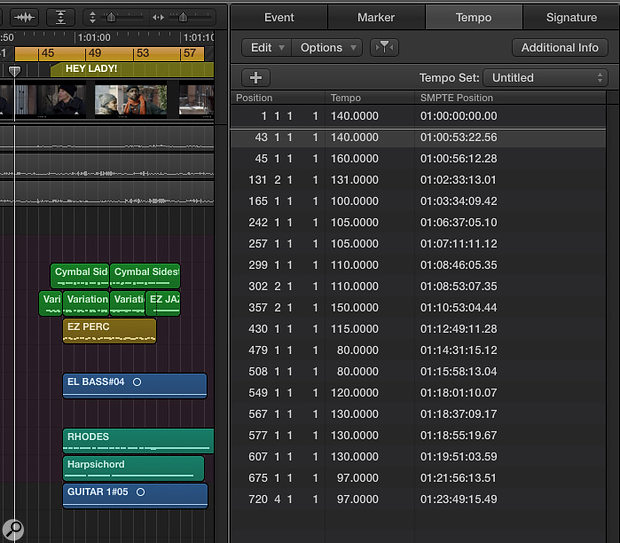 Screen 1: Create a new tempo change (using the ‘ ’ button) two measures before the second cue (it will default to the tempo of the preceding event).

When scoring a film, I (and most other film composers I talk to) try to keep each act in a single session/song/project for as long as possible. There are many benefits to this workflow: you can run off stems for the whole film in one go, and you don’t have to continually open and close multiple files. Additionally, being able to watch the film or act from start to finish is a great way to gauge what’s needed. Auditioning scenes one at a time can cause you to lose the flow and continuity of the big picture.

One of the drawbacks of working like this becomes evident when changes are needed regarding the tempo of a particular section and when there are cuts to the video. Within Logic’s array of features is the robust Tempo Operations window. However, when I’m faced with the aforementioned situations I use more simple methods.

In my first example, I have a project with several music cues that are sync’ed to picture. The director loves them except he feels the first cue drags a bit. No problem.

My first fix is not Logic-specific, but a good tip. I’ll see if there’s a percussion track or anything appropriate that can have its tempo doubled up. Many times, with some of the elements playing at double time, this is all that’s needed to wake up a sleepy passage. But let’s say that the director isn’t buying it or the track still isn’t working for you. You’re going to have to get your hands dirty.

We need to change the first cue’s tempo but we want the following sections to stay right where they are in the timeline so that they continue to work with the picture. To accomplish this we need to create a ‘dummy’ tempo change one measure before the second cue. This bar will have a tempo (to be determined by Logic) that will place the start of the second cue exactly where we want it. Sound complicated? It is, but it’s worth it.

Start by opening the Tempo List by clicking on the List button in the toolbar (you may need to customize the toolbar to show it) or using a key command. Create a tempo change event for the second cue if there isn’t one already, using the ‘+’ button (Screen 1). Better yet, place it a full measure before your cue starts, if space permits. With a pencil (not the pencil tool, a real pencil), write down the SMPTE position of the second cue’s tempo change. Create another tempo change one bar before the one you just created using the ‘+’ button. Change the first cue’s tempo to whatever you want (Screen 2). In cue 2’s tempo line, type in the SMPTE position you wrote down earlier. Like magic, Logic creates the tempo in the previous bar that makes cue 2 start at the desired timecode. 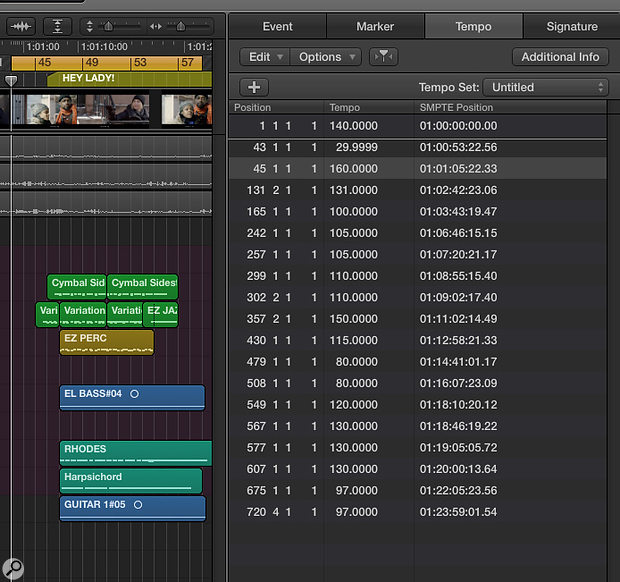 Screen 2: Type in the original start time (SMPTE position) of cue 2 into its Tempo Event and hit return. Logic automatically adjusts the tempo of our new Tempo Event to perfectly place the second cue to start at the timecode we specified. The tempo which was previously 140bpm becomes 29.9999bpm.

The reason to make the start of cue 2 one measure earlier is simple: to allow a bar of count-in at the new tempo. For this to make sense, you need to not think in terms of the cue or region’s start point but its measure and tempo change location as its start point. This method may seem complex and, admittedly, it’s not as elegant as a one-click solution, but it keeps your projects tidy and preserves the tempo in Logic’s timeline, making additional recording and editing painless. Another important aspect to keep in mind is that if you plan to output MIDI in order to make parts for live players (or use Logic’s score features), you need the music to adhere to the measures in the timeline.

If these new tempo changes are the final edits to your project and you don’t anticipate any more recording or editing to the music, and you aren’t making parts for live players, you can probably go with the more straightforward and simple solution. Select everything after the cue (or section) where the tempo needs adjusting. Right-click, and from the pop-up menu select SMPTE Lock/Lock SMPTE Position.

This will not only lock the region’s position but will also lock the individual MIDI notes. Regardless of the current tempo, these sections will play back in their pre-locked tempo. The drawback to this method is that Logic’s metronome will be rendered useless and your regions won’t line up with the measures and grid in the Arrange window, making further edits, quantising and/or recording troublesome.

Let’s now suppose that the director thinks all your music is perfect and you don’t need to change a thing. However, there have been some edits to the picture and your cues don’t start in the right places anymore. This might be a good time to save your cues as individual projects with their own movie start time. Keeping everything in one project is tempting, though. Let’s see if we can rescue this session.

Imagine that somewhere between the first and second cue, some belaboured and rambling speech was shortened by the director. For this scenario we want to remove space in the timeline. Keeping the following cues locked to a SMPTE point isn’t our goal since now our timeline (the video) has been altered. First, find the point where you want the second cue to start. Set the locators to begin at the new start time and end at the start of the second cue. Select everything in the Arrange window (Right-click / Select All). From the Edit menu, click Cut/Insert Time / Cut Section Between Locators (Screen 3). If asked to add an irregular bar to make everything line up, select Add. Logic will remove the space that was selected but, more importantly, it will shift all the following tempo and meter changes appropriately so that everything plays back as intended. 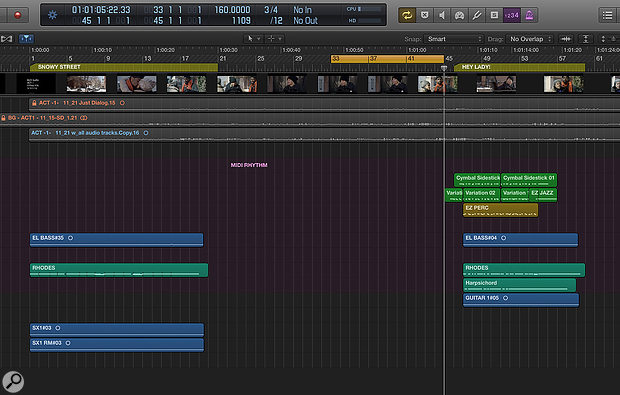 If the director adds footage to the scene, try this similar procedure. Set the locators so that the left one is at the start of cue 2 and the right one is where you actually want cue 2 to start. Select everything in the Arrange window (select All). From the Edit menu, click Cut/Insert Time / Insert Silence Between Locators.

Keep in mind that with both of these processes, any dialogue or temp tracks will be cut too (whether they are selected or not) and will need to have their end points dragged out.

Editing in the Tempo List can be confusing at first. To put you at ease, I recommend using Logic’s Tempo Sets. Simply create a new set from the drop down in the Tempo tab. Now you can experiment all you want, knowing full well that no matter how badly you screw up, you’re one click away from restoring your original tempo list.

There’s very little that can’t be achieved with regard to tempo in Logic. Understanding how Logic thinks is the key to getting the most out of it.