If you're having problems navigating in Logic Pro X, we can help you find your way again.

Many professional Logic 9 users haven't upgraded a year after the release of Logic Pro X. Others who have are still getting tripped up by the new interface and terminology. Over the last 10 months, this column has covered several of the significant new features like Drummer, Patches, Track Stacks and Smart Controls. This month, however, is about a few changes in your line of sight during basic operation. Hopefully Logic users will agree that it's easy when you know how...

Let's start with the interface elements that have been moved. 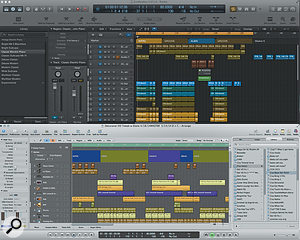 Logic Pro 9 versus Logic Pro X.The Library: One of the most notable changes that should have reassured Logic users immediately that the redesign has the pro user's best interests in mind is the Library's move from the right to the left side of the Main Window. This is perhaps the most logical reorganisation in Logic Pro X, placing the Library (for shopping for sounds) conveniently next to the Inspector channel strip where you can modify the sound. The eye barely needs to move to shift focus between them.

Transport: This has been moved up from the bottom of the screen where it has lived since the beginning of Logic time. For those of us who keep the Mac dock on the bottom, it's a relief to have the two finally out of each other's way. No more accidentally opening another app! Given all the navigation is managed at the top of the screen, your eye should adjust fairly easily. Incidentally, the 'Arrange Window', as it was known in Logic Pro 9, is now referred to by Apple as the 'Main Window'. Within this window, the primary workspace for your audio and MIDI regions is now called the Tracks area, no longer the Arrange area. 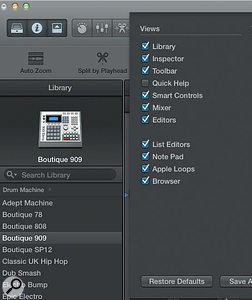 The Quick Help Button disabled and hidden from Control Bar.Here are two tips for navigating new buttons in the Control Bar at the top of the Main Window.

Decimal Tempo: Many Logic Pro 9-turned-X users are tripped up attempting to set a tempo that's not a whole number. This is another easy fix:

The next couple of tips will help you with the channel strip and track header.

Instrument Channel Strip: One significant change is that the input field for the software instrument is near the top of the channel strip, no longer above the output field. Where to click on the channel strip for what purpose takes a bit of experimenting and this is covered in detail in the April 2014 workshop on patches and track stacks (http://sosm.ag/apr14logic).

To choose a different Logic or third-party software instrument, click to the right of the instrument name on the up/down arrows that appear when you hover over the area. To select a different patch, click inside the Library and not on the channel strip. If you accidentally click the disclosure triangle to the left of the currently selected channel-strip setting, you'll close the Library.

Track Enable: There's a new button on the track header that enables and disables the track. This will be familiar to GarageBand (or Pro Tools) users. A Logic Pro 9 user may get confused if neither the track or region is muted but it's not playing back. In this case, the track might be disabled. When the track in enabled, the button turns blue.

However, we can still call it progress: Musical Typing has a few new useful features not possible before with caps lock — you can still operate the sequencer! 'R' starts recording whereas caps keys locked you out. Also, pressing the Tab key will sustain notes.

When it comes to key commands and tools, there are few changes to note.

If you've forgotten how to do this, here's a quick refresher on editing Key Commands:

The Escape Key: It's a bit disarming for old-school Logic users to find the Escape key doesn't access the floating tool menu by default. Good news, it's easy enough to re-assign in the Key Commands — the function is called Show Tool Menu. This floating tool menu has always been a brilliant workflow for not losing focus, bringing the Tool menu right to wherever your Pointer tool is positioned on the screen.

Keep track of your old presets and loops with these tips.

Settings & EXS Instruments: File management has changed for accessing your own custom plug-in settings, EXS sample instruments and channel strip settings. To access them in Logic Pro X, be sure to move any you created in Logic Pro 9 over to this path: User / Music / Audio Music Apps folder.

Loop Browsing: The refreshed Apple Loops Browser has tons of great new loops and a few other noteworthy search additions. Click 'Loops' at the top of the Loop Browser to reveal a new menu. In addition to the standard tags, column view and the search field, there are a few new ways to search. In the pop-up menu you can now filter by genre, such as Hip Hop, Electro and Dubstep, and also by Jam Pack, for example, Remix Tools, Rhythm Section, Voices and Symphony Orchestra.

Here are a few fixes for commonly encountered problems in Logic Pro X that should help upgrading Logic 9 users.

Advanced Tools: Most professional Logic Pro X users have discovered how essential it is to keep Advanced Tools enabled for access to familiar, everyday features of Logic Pro 9. In fact if something is acting up, especially if you're working on someone else's system, that's the first go-to place to troubleshoot. Just make sure it's enabled in preferences. Even the Edit button on the EXS24, used to access zone mapping, will go missing if not.

Track On/Off button enabled in Track Header.Here are some tips for the audio engineer. The button to adjust the waveform scale has been moved up to the upper right of the Main Window and is far more discoverable. It's just to the left of the vertical and horizontal zoom display.

When audio is selected, there are now two editor tabs: one for the new Track Editor for track-based editing of multiple regions, and one for the File Editor, which is basically the old Sample Editor.

Here's one Audio Preference to look out for (which is enabled if Logic Pro X is a fresh install on a Mac without a previous version of Logic). With 'Input monitoring only for focused track, and record-enabled tracks' enabled, only the selected (focused) track will be monitored. It's a GarageBand behaviour feature which is useful when, for example, you are recording a drum kit and guitar and only want to hear the guitar.

While these changes can seem disorientating to existing users, for the most part you should find Logic ergonomically redesigned and more conducive to an efficient, creative workflow. Be patient Logic 9 users!