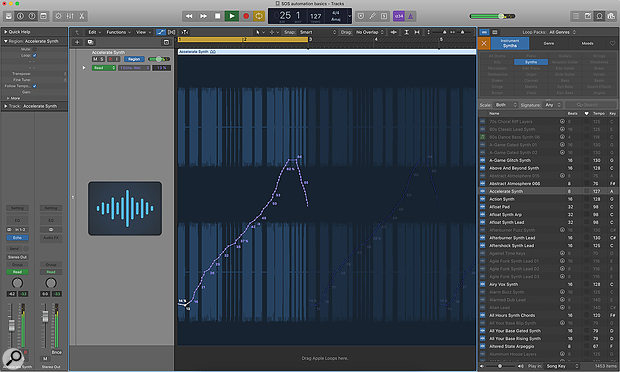 Screen 1. Setting the Track Automation button to Region allows you to record or draw automation into a region. Loop the region by pressing L and you’ll hear both the melody and automation repeating.

We take a closer look at the automation features in Logic Pro X.

Logic has one of the deepest automation implementations of any DAW, and as such it can be intimidating if you are new to the software or haven’t mastered the intricacies of the automation options. In this article we approach using automation by working through some typical examples.

Let’s begin with a simple scenario. When writing a piece of electronic music it’s common to create a looped synthesizer part that will provide the foundation of a track. To make the loop more interesting we can add automation that also loops with the melody. In a new Logic project open the Loop Browser and navigate to Instrument / Synths and find the Accelerate Synth loop. Drag this onto the Arrange page to create an audio track and add an instance of Logic’s Echo plug-in as an insert.

Logic has two types of automation: track based and region based. You can switch between these from the Track Automation button in the Track Header next to the Volume Fader. As we want our automation to loop with the audio region you should set this to Region (Screen 1). Now click in the Track Header on the Automation Mode button and change it from Read to Touch. The Touch mode enables you to record automation from any control whilst you are in playback, but helpfully returns a parameter to its original value when you release the control.

Set Logic’s transport to cycle the first two bars of the arrangement. Open the Echo plug-in’s editing window, hit Play on the transport and move the Wet slider from low to high to increase the Echo level across the two-bar loop. Repeat the same actions but this time use the Latch automation mode. Observe that this time when you release the Wet Level control, the written automation remains latched at the last value, thus replacing the existing automation on the track. Set the Automation Mode to Read and loop the synthesizer region by pressing L on your keyboard. Turn off cycle playback and hit Play. You will hear the automation loop with the region.

Let’s now consider a different use case for automation. This time we will automate the filter cutoff to gradually increase from a low to high value across eight iterations of our synthesizer loop. Add an instance of the Single Band EQ plug-in and set the EQ Mode to High Cut. Change the Track Automation button from Region to Track and this time set the Automation Mode to Latch so that once we finish our automation pass it will latch at the last value. Hit Play on the transport and gradually sweep the Frequency knob from 160Hz to its maximum value over a 16-bar duration. Now listen back to the recording and notice that your EQ automation pass plays with the track and the Echo automation loops with the region.

If you decide that the whole thing should start from a slightly higher frequency you can go to the Value/Trim field (showing the currently automated value) in the Track Header and click and drag the value up. This will helpfully shift the automation to a higher value.

You can edit either the Track or Region automation on the Arrange page, however it’s worth bearing in mind that the Track Automation button acts like a view filter and must be set to the appropriate type. If you set it to Region the Automation drop-down will filter the list to display the recorded region automation parameters, in our case Echo / Wet Level. Alternatively, if we set it to Track the drop-down will contain Single EQ / Frequency.

Let’s now consider another use case for automation: vocal rides. We will look at how to apply detailed automation to a vocal track and then examine different ways that you can mix that vocal track louder or quieter whilst preserving the original automation rides. Add a vocal recording to your current project or open an existing project that contains a vocal track. When completing a mix you might use automation to bring out the endings of words that are too quiet in the mix, or to decrease the level of any esses or breath noises which are too prominent. To automate the vocal level press A to go into automation view, now use the pencil tool to draw in some level automation. Alternatively, if you have a handy controller on your desk you could use Automation Quick Access. Go to Mix / Enable Automation Quick Access and then, from the Preferences pop-up, click the Learn Message button. Move a controller to assign it and then click Done to confirm the assignment. You can now use the Automation Mode settings Touch or Latch to record your automation in real time using the mapped hardware control. 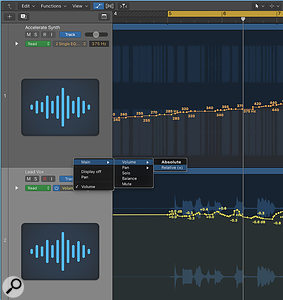 Screen 2. On a vocal track you can introduce intricate absolute volume automation to bring out ends of words or decrease breath noises. You can then use relative volume automation to add broad volume changes to a section, leaving your original automation untouched.Once you have added detailed volume automation to a vocal track it can be difficult to alter the level of phrases or sections of the vocal that are a little quiet or loud. Fortunately there are couple of ways to solve this problem in Logic. The first way is to set your click-tool to the Pointer and your Command-click tool to the Marquee. Now hold Command and draw a marquee selection across the automation you want to turn up, and then release the Command key and use the pointer tool to drag up the selected automation. The second way is to use Logic’s relative automation option. From the Lead Vocal track’s Automation Parameter pop-up, choose Main / Volume / Relative (see Screen 2). 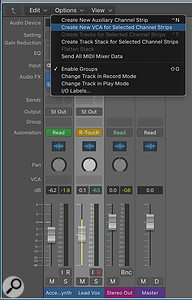 Screen 3. To create a VCA group and assign it to a track, select the track in the mixer and then from the Options menu choose the Create New VCA for Selected Channel Strips option.If working with relative and absolute levels sounds a little too involved for you then another way to achieve the same thing is to use a VCA. This has the advantage of having a dedicated fader. To achieve this, open the Channel Mixer, select the vocal track and go to Options / Create New VCA for Selected Channel Strips (see Screen 3). In the mixer, Ctrl-click on the VCA strip and choose the Create Track option to create a track lane for this on the arrange page. You can now draw volume automation for the VCA group and, as this is assigned the vocal track, it will trim existing automation in the same way as the relative volume lane. This VCA style of automation can become even more useful when using it to automate groups of backing vocal tracks together, provided they are all assigned to the same VCA group.

Logic is a deep application and when it comes to automation features there is way more to discover than we have space to cover here. However, hopefully these examples have clarified how and where you might use the main automation features in your production work.