As Logic updates to 9.1 and an Apple launch hits the headlines, the new year could be the time to acquire some new skills.

The usual early‑year hiatus in freelance work is taken by many freelancers as an encouragement to consider 'upskilling' through training and education. 'Continuing professional development' is an area often neglected by freelancers, as it means taking time off and paying for a course, which is a double hit, but professional certification is fast becoming a prerequisite for any audio professional's CV.

Apple offer certification in all their pro applications, including Logic Pro. The 101 (level 1) and 301 (level 2) course and exam have been available since the days of version 6, and each certification is retired with the introduction of a new version, after an appropriate period of grace. As I write, there are only a couple of weeks left until Logic Pro 8 level 1 certification is retired, and Logic Pro 9 courses are being rolled out by centres across the world. Those wishing to update (if they're already a Logic Pro 8 Certified Professional) can enroll at a centre and just take the exam, but those new to certification will have to enroll and attend a complete course. 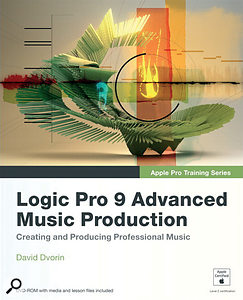 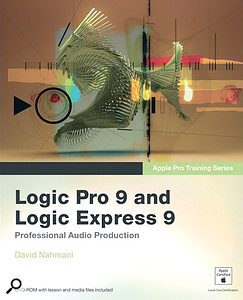 Courses are typically three days long (although some centres offer variations), ending with a two‑hour, on‑line, multiple‑choice examination. The course follows a specific textbook, which is usually provided as part of the course fee. In the case of Logic Pro 9, the 101 course uses Apple Pro Training Series: Logic Pro 9 and Logic Express 9 by David Nahmani, and the 301 course uses Logic Pro 9 Advanced Music Production: Creating and Producing Professional Music by David Dvorin, both published by Peachpit Press. These are excellent reference sources in their own right, and can be bought from the Apple Store, Amazon or the publisher (www.peachpit.com) without the need to attend a course. The courses usually cater for novices (although a computing background and awareness of audio recording, mixing and sequencing concepts is a major benefit!) and seasoned pros alike. The latter usually discover the correct terms for routines they have used for years, or more efficient workflows, and everyone benefits from the networking opportunities that arise.

Courses are led by trainers who have been through a rigorous programme of training and certification themselves, so they are not just Logic Pro geeks, but have also been tested for their ability to teach. Centres offering certified training are called Apple Authorised Training Centres, and you can find one in your area by searching http://training.apple.com/locations.

Apple certification is a global program, so it is recognised worldwide, and once you're certified you will be listed on the Apple certification records system, which can be found at: http://training.apple.com/certification/records. This is a directory that can be used by employers looking for an expert in your field in their area. For students on full‑time courses who are offered the opportunity to achieve certification, this offers vocational proof to potential employers that may be more meaningful than a degree in music technology and wallpaper design! One last bonus is that you'll be able to use the Apple logo on your business card and web site.

Logic Pro 9 has received its first major update (after a couple of incremental ones) and is now at version 9.1. Version 8 was never updated beyond 8.0.2, so this is either good news, in that Apple finally have a team of coders looking after their flagship pro‑audio package, or implies that version 9 is (or, rather, was) a swiss cheese of holes that needed plugging! 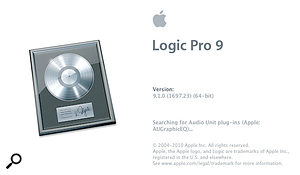 How to get Logic Pro 9.1 to open in 64‑bit mode (Get Info).One major issue addressed in this update is Logic's ability to run in 64‑bit mode. The main benefit will be felt by users of third‑party plug‑ins such as software sampler instruments, which can now address more than 4GB of RAM (up to a theoretical limit of 16 exabytes). EXS24 remains able to address memory separately to the application itself, so no major difference in performance will be seen by users of this plug‑in. Of course, running in 64‑bit mode requires Snow Leopard (10.6.2), so there may be additional benefits in overall responsiveness as a result of the way the application interacts with the OS. Operation of 32‑bit plug‑ins in a 64‑bit environment is allowed by the provision of a '32‑bit Audio Unit bridge', and it should also be noted that several features are not accessible in 64‑bit mode, notably MP3 conversion and Rewire support. A full list can be found at http://support.apple.com/kb/TS3171. The 66 other 'issues' addressed by this update are listed at http://support.apple.com/kb/ts2565.

MainStage 2 has also received an update, to version 2.1, allowing 64‑bit operation, and further good news is that the updates are free (which should please those of us with long memories still smarting from the Logic Pro 7.1 upgrade charge!).

The Apple Has Landed

Just as this issue was about to go to press, the news of the launch of Apple's keenly anticipated new product had just broken. We didn't have time to include detailed observations this month, but rest assured that we'll be taking a look at the implications for musicians of the iPad multi-touch device in the next issue. So watch this space!

Digidesign have offered certification in Pro Tools for even longer than Apple, and their well‑established program is detailed at www.digidesign.com. Recent updates to course offerings include Pro Tools for Game Audio, and the Worksurface Guide courses, which cover techniques for mixing, routing and monitoring through a Control 24, D‑Control or D‑Command control surface.