The Pentium M processor has various desirable qualities, not least its very low power requirement, which leads to a reduced need for cooling and a quieter life for musicians. However, it has always been confined to use in laptops, with corresponding limitations — until recently.

When I bought my Centrino 1.4GHz laptop from Millennium Music Software back in October 2003, it was after considerable thought, but its Socket 479 Pentium M processor was the key to my choice. Intel generally quote a Pentium M performance factor of 1.5x compared to their P4 range, so the 1.4GHz Pentium M in early tests was claimed to provide roughly equivalent performance to a 2.1GHz Pentium 4. In fact, my own tests showed that with reverb plug-ins my 1.4GHz model performed as well as a Pentium 4 2.2GHz, while its performance with many EQ and compressor plug-ins measured closer to that of a 2.8GHz P4 (more details in PC Notes December 2003). However, time marches on, and the latest 2GHz Pentium M 'Dothan' models are now turning in performances roughly equivalent to Pentium 4 Prescott processors in the mid-3GHz area. 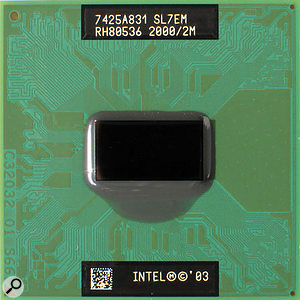 Intel's Pentium M 'Dothan' processor, pictured here, generally relies on exotic heatpipe cooling solutions. For this reason, it needs a special heatsink if it's to be installed in a desktop PC.

Actually, it wasn't processing performance that first drew me to the Centrino laptops, but low acoustic noise. Pentium M power consumption is considerably lower than that of Intel's other processor ranges, especially when compared with the Prescott models. For example, typical processors from both AMD and Intel offering performance roughly equivalent to a 3GHz Pentium 4 have a maximum power dissipation of between 70 and 90 watts (some of the faster Prescott models rise to 115 watts), whereas an Intel Pentium M Dothan processor of 2.0GHz is rated at just over 20 watts!

This low power consumption means that Centrino laptops have significantly longer battery life than models running different processors, but it also means that keeping Pentium M temperatures within safe limits is a lot easier, which, in turn, results in low acoustic noise. On my Centrino 1.4GHz model, for instance, the cooling fans rarely spin up at all, making this the perfect computer when you want to plug in a microphone and make an audio recording in the same room.

With higher Pentium M clock speeds now resulting in laptop performance similar to that of many desktop PCs, but with much lower acoustic noise levels, by now some of you may have guessed where I'm heading with this discussion. Many musicians have dreamed of creating a Frankenstein-style desktop PC containing a Pentium M laptop processor, and various motherboard manufacturers have done their best to make that dream a reality.

Two examples are AOPen's i855GMEm LFS and DFI's 855GME MGF motherboards, both launched near the end of 2004. Both of these have a Micro ATX form factor (whose maximum dimensions are 9.6 inches square compared with the 9.6 inches by 12 inches of the more familiar standard ATX format) and are generally used in mini-PCs (such as the one I reviewed from Red Submarine in SOS August 2003). As their names imply, these two motherboard models feature Intel's 855GME chipset, as used in Centrino laptops, which further contributes to their low-power design, as only the necessary portions of the chip are run at any given time. 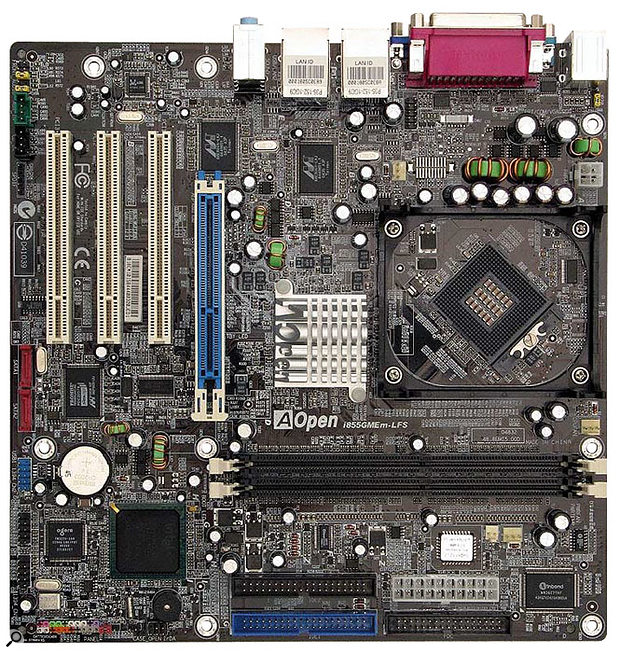 This Micro ATX-format motherboard from AOpen is ideal for a small 'shuttle' PC, but is unusual in supporting the Pentium M processor normally only seen in Centrino laptops.

One disadvantage of using a Pentium M processor in a desktop is that it's built for notebook PCs with custom heatpipe cooling, so it doesn't incorporate an integrated heat spreader (IHS). This is the metal cap that you see on most desktop processor chips that sits between the inner core and whatever heatsink you attach. In contrast, the Dothan processor exposes its innards to the world, needs to be treated rather more delicately and requires a special heatsink. Fortunately, both of the motherboards I'm talking about are bundled with a suitable small heatsink/fan combination that will do the job, and although most DIY builders normally discard such bundled items in favour of more exotic and quieter options, in this case the cooling requirements are so modest that an alternative is not really necessary.

Sadly, it's the 855 chipset that lets down overall performance, since it only supports single-channel RAM up to DDR333 speeds, resulting in a peak memory bandwidth of just 2.7GB/sec, which is much lower than that offered by most other modern chipsets. This specialised type of motherboard is also significantly more expensive than most desktop alternatives capable of providing similar performance (the AOpen model I mentioned earlier retails at about £160). Nevertheless, they have been welcomed by those who wanted to build desktop machines that are truly silent from a distance of more than a couple of feet, yet still support the user's choice of AGP graphics card, PSU, RAM sticks, and hard drives. If you're interested in building such a machine, there's an excellent guide to be found on the Maximum PC web site (www.maximumpc.com/how_to/reprint_2005-01-28.html).

As I write this, the first reviews of AOPen's second-generation Pentium M desktop motherboard have just started to appear. The i915GMm-HFS features the much more advanced Intel 915 chipset used in Prescott-based PCs (see my September 2004 PC Notes column for more details) and supports dual-channel DDR-II or single-channel DDR RAM for a much higher peak-memory bandwidth, as well as much faster PCI Express x16 graphics cards, and provides integral SATA/RAID support, bringing its potential performance much closer to that of other modern Pentium 4/Athlon64 desktop designs. This motherboard has a truly innovative design but is even more expensive, at around £200.

Further to my PC Musician feature on drive defragmentation in SOS June 2005, I've discovered that it is possible to encourage Microsoft's built-in defragmenter utility to 'defrag' a selection of drives or partitions in sequence. What you need to do is create a 'BAT' (batch) file. Old-time DOS users will already be familiar with these batch files, which are essentially text files containing a series of commands, one on each line. Just open Notepad, type in a line for each partition you want to include, such as 'defrag c:', 'defrag d:', and so on, and then save this text as a file with a suitable name, such as Defrags.bat. You can run it at any time by double-clicking on it. Many thanks to SOS reader Bill Blackledge for this hint.

What many PC users have been hoping for is a way to plug a Pentium M processor into existing motherboards that already have more advanced facilities. After all, the Pentium M is electrically compatible with the Pentium 4, and there are even the same number of pins on its package. The problem is that the Socket 479 pin-out of the Pentium M Banias and Dothan ranges is completely different from that of the Socket 478 used by the Pentium 4 Northwood range (and early Prescott models). 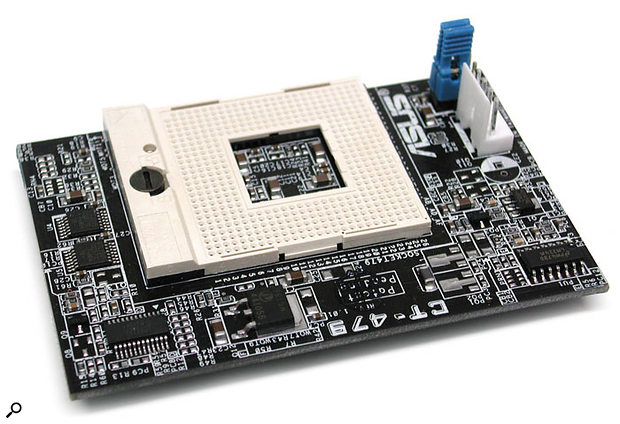 Nevertheless, owners of some Asus motherboards may find that their dreams are about to come true. The Asus CT479 CPU Upgrade Kit can be fitted to various Asus motherboards featuring i865 and i875 chipsets and consists of a small circuit board with Socket 478 pins on the bottom. You plug this into your motherboard and then you can plug a Pentium M processor into the Socket 479 mounted on the top of the circuit board. There's also a three-pin jumper on the board to let you select between 400 and 533MHz FSB (Front Side Buss) speeds. A heatsink and low-noise fan complete the package.

With the fastest 2.13GHz Dothan model installed into an Asus P4C800 motherboard, test results have shown performance that just exceeded Athlon 64 3800+ and 3.6GHz P4 Prescott-based PCs in some areas, while the power consumption of the Dothan was roughly half that of the Prescott. Another benefit of this upgrade is that most of the motherboard BIOS overclocking options are still available. Already it has proved possible to overclock a 2.13GHz Pentium M Dothan up to a massive 2.56GHz fairly easily, by increasing the frequency of the FSB. The overclocked processor beat some Athlon 64 FX and Pentium 4 Extreme Edition machines in 3D game tests!

I can envisage many musicians who still have Asus Socket 478-based PCs wondering about buying a CT479 Upgrade Kit and a Dothan processor to boost their processing performance. It has to be admitted that the Pentium M isn't an especially long-term solution, since current models don't provide 64-bit support (though there will eventually be dual-core models when the next-generation Pentium M 'Yonah' core is released in 2006). Nevertheless, for those Asus motherboard users who have been tentative about abandoning their current PCs in the present climate of change, this could be the perfect quick and easy way to upgrade performance, with the added, and very welcome, bonus of reduced acoustic noise.

If Asus add support for my P4P800 Deluxe motherboard, I'm seriously considering abandoning my Pentium 4 2.8GHz Northwood and 'going Dothan'. In the longer term, I can also see why so many industry experts think that Intel should scrap the Pentium 4 range to concentrate on faster Pentium M models.