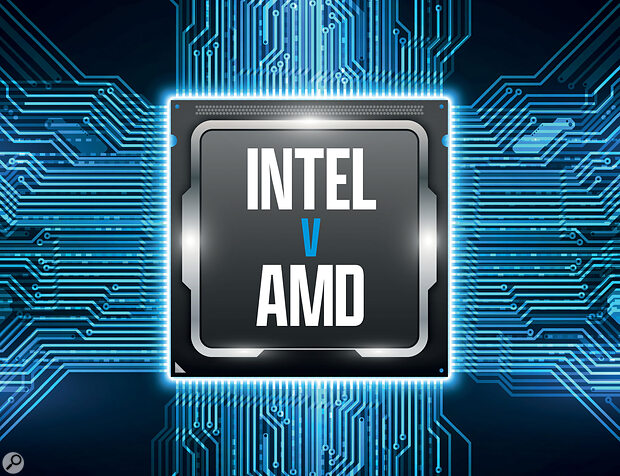 Intel’s latest CPUs promise big performance gains. But can they topple AMD in our audio benchmarks?

Computers underpin most music production today, and at the heart of each computer is a CPU. While some audio producers’ computing needs are relatively modest, plenty of us need more power — but when you want to assess a chip’s capability for real‑world audio applications the headline specs tell you only part of the story. As well as the maximum single‑core speed and number of cores, factors include the price, power consumption, memory handling, heat, and the measurable real‑world performance for different use cases at various audio interface buffer settings. This article aims to help you understand what the latest crop of CPU chips are capable of when working with audio: how many signal processing or virtual instrument/sampler plug‑ins you can realistically run at a range of audio buffer settings before you run into problems.

I’ve included some charts which show how Intel’s new 12th‑generation (Alder Lake) chips compare with the previous series and AMD’s current range, as well as how RAM might influence the performance. But I’ll start by bringing you up to date on the main manufacturers’ progress since we last assessed CPU performance, in SOS August 2020: https://sosm.ag/core-wars-0820. I’ll then explain some other significant developments in the computing world, before discussing some useful ‘takeaways’ from our tests for anyone considering buying or building an audio machine in the near future.

If you read that previous article, you’ll recall that AMD were in a strong position. Although Intel had dominated the audio‑computer world for the best part of a decade, AMD’s 2000 series had already begun to level the playing field and by this time their well‑specified and affordable 3000 series had left Intel with no option but to bring their prices down. Meanwhile Apple’s decision to develop their own chips had further ramped up the pressure on Intel, and I predicted that we may be on the verge of another ‘CPU arms race’. So let’s quickly catch up on what’s happened since.

Early in 2021, Intel released their 11th‑generation (I’ll call it ‘gen’ from here) Core processor range, which met with a mixed reception. The Skylake desktop chip architecture was replaced with Cypress Cove‑based cores borrowed from the 10nm‑based solution already found in various laptop models. It was certainly a step in the right direction, delivering a significant improvement to single‑core performance; the fastest model offered a base speed of 3.5GHz and a maximum Turbo frequency of 5.3GHz. But new‑gen chips usually also benefit from a ‘process shrink’ (or ‘die shrink’; a physical scaling down of the semiconductors) and this wasn’t achieved. So the 10nm design had to be fitted into a 14nm‑chip package, and the performance increase came at the cost of relatively high power consumption and heat. And that limited the maximum number of cores...

For applications where single‑core speed is of paramount importance, then, the 11th‑gen chips held their own despite stiff competition. But where multicore processing is more important they proved less impressive. The top‑of‑the‑range Core i9 11900K, for example, had eight cores compared with the previous‑gen Core i9 10900K’s 10, and in several performance tests involving tasks that efficiently exploit all the available cores the 10900K scored better, hence Intel continuing to offer that chip.

AMD weren’t resting on their laurels. Their much higher core‑count chips had already proved suitable for audio workstations before their 5000‑series CPUs arrived at the end of 2020, several months before Intel’s 11th‑gen chips. AMD’s 5000 series showed that the company were able to remain a step ahead of Intel, in terms of both release schedule and CPU performance. AMD issued an interesting note ahead of the 5000‑series release, explaining that they’d not only delivered higher single‑core speeds but had also reworked the memory handling, with a new, larger, shared level‑3 cache — a more tightly integrated design that eschewed multiple CCX cores in favour of a single‑block arrangement. Putting this in more musician‑friendly language, the performance of the earlier generation Ryzen chips often suffered at the smallest ASIO buffer settings (which are needed for low latency) and this could be partly alleviated by using faster‑than‑specified memory, effectively overclocking to solve the problem. The new system promised to eliminate cross‑CCX latency (a result of the data being passed back and forth between CCX cores) and thus to enable better performance at low latencies.

Windows 11, released towards the end of 2021, a few weeks before Intel’s 12th‑gen hardware, included some optimisations that Microsoft developed in tandem with Intel to exploit their new chips. As well as benefitting from the belated process shrink, the 12th‑gen chips are the first widely available PC‑based hybrid‑design CPUs. ‘Hybrid’ means that the Alder Lake CPUs employ two core types, one geared towards higher performance and the other power efficiency. (Similar in concept to Apple’s M1 chips, this is often referred to as a ‘big.little’ configuration after ARM’s big.LITTLE design.) As with the 11th‑gen Core i9 11900K, the new flagship Core i9 12900K offers eight hyper‑threaded high‑performance cores, capable of exceeding 5GHz. But it also includes eight ‘efficiency’ cores, which aren’t capable of hyper‑threading and top out at 3.9GHz, so this CPU supports 24 threads in total. 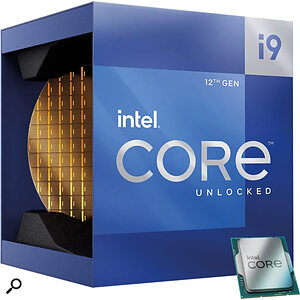 Intel’s 12th‑gen Core processors benefit from a so‑called big.little architecture, which overcomes problems in previous generations when running different cores at different speeds.Although Apple’s move away from Intel silicon seemed to go relatively smoothly, early adopters inevitably encountered some problems: lots of software had to be updated and recompiled to work on the new platform; Apple provided the Rosetta application compatibility layer in Mac OS Big Sur but its success with audio applications was a bit hit and miss. As more software has been reworked for native M1 compatibility and users have settled on...