Not only has the iPhone, star of the pocket‑sized world, reached its fourth generation, but its desktop counterpart, the Mac Mini, has also had a make‑over. 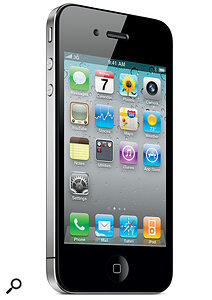 New to the iPhone 4 is the prospect of multitasking.

Three years to the month after the launch of the original iPhone, Apple have announced the iPhone 4. Sporting a front‑facing camera, A4 processor (as in the iPad) and a display whose pixel density is so high the human eye cannot distinguish individual pixels, it is everything we were expecting. After one hapless Apple employee left a test model on a bar stool in Redwood City, California, some weeks before the launch, cynics might claim this to be a publicity stunt to fuel the pre‑order frenzy for what is, after all, a fourth-generation product. If so, it seems to have worked, as stories have emerged of Apple running out of the new device before some UK mobile network operators had even announced tariffs. The removal of unlimited data access from announced tariffs is a surprising move, given that the bandwidth‑hungry video‑calling feature, FaceTime, is limited to wireless networks only.

The next generation of the iPhone operating system, now called iOS 4, will appear in the new phone and allows developers to access a variety of multitasking options (including sound from apps such as Pandora and Spotify continuing while you access another app). The amount of RAM in the new iPhone will reportedly be upgraded to 512MB to support multitasking.

Where there were five USB2 slots, there are now four, with the fifth being replaced by an SD card slot.Photo: Apple

Exciting though these developments were, the Worldwide Developers' Conference in California was not the platform for any further announcements, including any that might be of interest to those making music on Macs in a more traditional sense. A new Mac Mini was, however, announced shortly afterwards. The Mac Mini has long been a favourite of mine and, while not the powerhouse that is a Mac Pro, it is quietly capable, in that it is both capable and quiet (it certainly does not have a propensity to turn on cooling fans in the middle of a take, like my MacBook!). It allows those on a more limited budget to access the creative potential of the Mac while making use of existing peripherals. This makes the Mini both cost effective and environmentally friendly, supported by the fact that the power consumption of the new model is down from 14W to 10W at idle, and down from 110W to 85W as a maximum.

The design has changed to feature a lower, slightly wider, case in brushed aluminium, with a removable base for access to RAM, which can now be upgraded to a maximum of 8GB (up from 4GB). The available processor speeds have been upped from 2.26GHz and 2.53GHz to 2.4GHz and 2.66GHz.

Graphics are now taken care of by an NVIDIA GeForce 320M, but a more intriguing change has taken place around the back of the new machine. There are now four USB2 ports, with the fifth being replaced by an SD card slot. The mini‑DVI port of the previous model has been replaced with an HDMI port with support for 1920x1200 resolution. From a visual standpoint, these are difficult to tell apart, but the key difference is that HDMI also supports the transmission of simultaneous audio, which makes the Mac Mini an attractive proposition as the centre of a home media system. The miniature DisplayPort remains (with support for 2560x1600 resolution), allowing the Mini to support a wide range of monitors in both extended desktop and mirrored modes. The Mac Mini Server option has also been updated, with hard drive capacity remaining at 1TB.

In The App Spotlight...

Airborne iPad: The iPad could become an essential studio device with the release of Air Display ($9.99£5.99 from the App Store, or visit http://avatron.com/apps/air‑display for more information). This lets you set up your iPad as a second monitor for your Mac (appearing in System preferences as a second monitor that can extend the desktop or mirror the main display), and even allows touch response. So you can set up a Logic Pro window with transport control to be used inside the vocal booth, for example. Operating over wireless, performance with video is not what you would expect from a traditional second monitor, but the benefits of a handheld device are obvious.

Remote possibilities: Bigged up by Robin Bigwood in last month's Digital Performer workshop (see /sos/jul10/articles/dpworkshop_0710.htm), Saitara's AC7 app ($5.99£3.49 from the App store, or go to www.saitarasoftware.com for more information) is a remote-control app that also works with Logic Pro and Pro Tools, and has a 'universal' mode that can be configured to work with other DAWs.

The same company also offer the AG7 MIDI guitar controller, which has no sounds of its own and can control MIDI‑enabled instruments on your Mac over a wireless network. It works well with GarageBand and Logic Pro, but should also function with other MIDI‑enabled software.

What Do Mastering Engineers Actually Do?
1 day 5 hours ago.