This month we consider the return of Power PC processor technology to Apple, and also investigate how adding Apple's RAID card to the latest Mac Pro can improve audio performance.

Of all the companies in the computer industry, Apple are perhaps the most surprising. While their policy for not commenting on unannounced products and general sense of secrecy is legendary, it can often be hard to predict the ultimate outcome even when you look at announcements that are made. For example, who could have predicted that the release of iTunes, which at the time seemed like just another application to play MP3 files, would years later provide the platform for what has now become the top music retailer in the US?

Apple might be predictably unpredictable, but there's always a strategy. Though with this in mind, who would have predicted that nearly three years after Steve Jobs announced that the entire line of Mac computers would make the transition to using Intel processors, Apple would acquire a company that designs Power PC chips? 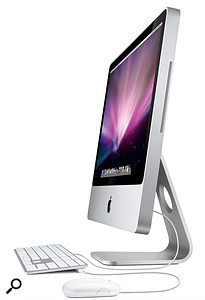 As we approach the iMac's 10th anniversary this August, Apple have revised their current line of iMac computers. The new iMacs offer faster Penryn-based Core 2 Duo processors, with the high-end 24-inch model now available with a 3.06GHz processor, although what's perhaps more interesting is the faster 1066MHz front-side bus (over the 800MHz bus used in the previous model). This faster bus was thought to be part of Intel's forthcoming Montevina platform (the successor to Santa Rosa), but Apple seem to have made use of this improvement ahead of schedule.

PA Semi — a company acquired by Apple in April for a price that has been quoted as $278 million — was founded by processor veteran Dan Dobberpuhl in 2003. While not quite a household name, Dobberpuhl previously worked at the influential computer company Digital Equipment Corporation in its heyday, leading the project that resulted in the release of the high-performance 64-bit Alpha RISC processor in 1992. In fact, it is testament to its design that Alpha processors, known for their reliability and performance, are still used by many critical servers to this day; and despite the last version of the Alpha being released in 2003, sales of Alpha-based computers continued until last year.

After working on the Alpha, Dobberpuhl and his team attempted to create a version with lower power consumption, which would have sacrificed some of the chip's processing capability. However, according to an interview with Dobberpuhl in 2003, producing a less powerful version of the Alpha (in all senses) didn't make much sense, given that the Alpha was both regarded and marketed as a high-performance processor. Instead, Digital decided to take an existing processor core with low power requirements and improve its performance; so Dobberpuhl and his team took an ARM core and made it into the StrongARM. 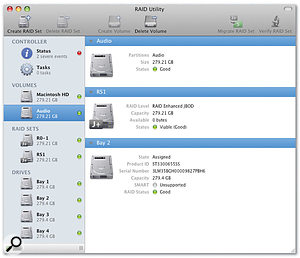 The RAID Utility allows you to configure and manage hardware RAID Sets if you have a Mac Pro fitted with Apple's RAID card.ARM are an interesting company for many reasons, not least because of their origins in Acorn, the company that produced the computers responsible for introducing a whole generation to computing in the UK. But ARM are also interesting because they made their money as a so-called fab-less chip company, which is to say that while ARM design processors, other companies handle the actual fabrication (or manufacturing) process. Apple were one of three companies (along with VLSI and Acorn) that founded ARM; and although they have long since sold their interest, Apple still make use of ARM processor cores in both the iPod and iPhone product lines.

Dobberpuhl eventually left Digital and started his own processor company, Sibyte, which was bought by Broadcom in 2000 for just over $2 billion. Following a period as vice-president and general manager of the Broadband Processor Business, Dobberpuhl founded PA Semi and obtained a license for the Power architecture from IBM, in order to create a new Power-based processor core. The goals for the core were to be both powerful and efficient, so the line of processors that made use of the resulting core was named PWRficient; although, like ARM, PA Semi were the designers, not the manufacturers of these chips.

Following Apple's decision to adopt Intel processors for Macs in 2005, Dobberpuhl was said to have shared the surprise of most Mac users — perhaps more so, as Apple were rumoured to be in discussion with PA Semi at that time to use PWRficient processors. But even though Apple now own PA Semi, there have been many comments made by Apple executives indicating that Apple made the purchase for PA Semi's considerable intellectual property, not to mention the talent of its engineering staff, rather than for the PWRficient processor. In one article, Jobs himself mentions that Apple have no intention of producing Macs with Power PC processors, which makes sense, given how the transition has arguably opened up new markets for Apple, with Mac hardware now being able to run Windows and other operating systems under virtualisation.

Even if we don't see Power PC-based Macs again, it's fascinating to consider the potential of Apple's latest acquisition. With PA Semi's skill in producing both powerful and efficient processors, Apple may have an ace in hand for the forthcoming embedded-devices war, where products like the iPhone (and even Apple TV) will need to become more powerful, and more power efficient, in order to survive.

Send In The SAS (Again)

The storage capabilities offered in Apple's current line of Mac Pro computers are the most advanced of any desktop Mac ever shipped — for the first time Apple is offering hardware RAID support with the optional RAID card previously only available with Xserve. Having looked at the performance of SATA drives (with and without software RAID) in the original generation of Mac Pros, and also of SAS drives in an Xserve in the past, I was extremely curious to see what kind of track count you would get with a fully-loaded Mac Pro, the RAID card, and a 300GB 15000rpm SAS drive in each of the Mac Pro's four drive bays.

When you order a Mac Pro with the optional RAID card (which means losing one of your PCI Express slots for it to be accommodated), your system drive will be included in a default RAID Set. A RAID Set is a configuration of one or more drives, which can be turned into one volume that your Mac will see as though it were a single disk attached to the system. While a RAID Set of just one drive might not seem very useful — since there would be no other drives with which to share data for improving performance or reliability — this mode, which is referred to as Enhanced JBOD, enables a single drive to take full advantage of the 256MB read-and-write cache memory on the card.

If you're not familiar with RAID terminology, JBOD stands for 'Just a Bunch Of Disks', and refers to a mode of operation where disks are used outside of a RAID configuration such as '0' (striping, for performance), '1' (mirroring, for redundancy), or '5' (a combination of performance and redundancy).

The Mac Pro I was using only came with one drive, so I'm not sure how additional drives are configured when shipped from Apple. However, the three extra SAS drives I added myself showed up in regular JBOD mode initially (not Enhanced), meaning that the Mac sees it as a regular drive and doesn't take advantage of the RAID card's features, such as the cache memory. It is, however, easy to use the supplied RAID Utility to create RAID Sets for your individual drives, to make them Enhanced JBOD, or, of course, to create RAID Sets of two or more drives for RAID 0, 1 or 5 configurations — the latter of which requires a minimum of three drives.

The RAID card adds an extra £510 to the cost of a Mac Pro, and you'll also have to purchase the more expensive SAS drives as well. Whereas an additional 1TB 7200rpm SATA drive costs £279 if purchased with your Mac Pro, a 300GB (the largest capacity currently available) 15000rpm SAS drive is priced at £390. It's probably worth the cost if you want the ultimate performance in terms of number of tracks, and for running virtual instruments that stream samples from disk, but there may be some compatibility issues to consider if you run Pro Tools. It's also worth noting that Apple's web site states that the RAID card is compatible with Mac OS X only, which implies that there might be issues if you try and use it with Windows via Boot Camp.

Following last month's review of Apogee's Ensemble audio interface, Apogee have released updated driver software that, among other things, addresses two of the specific issues I experienced with the interface: kernel panics when connecting the Ensemble to the Mac, and Core Audio not being able to report the correct latencies to an audio application for offsetting recorded audio. Since using the updated driver (which admittedly has only been for a couple of days at the time of writing) I've yet to have an Ensemble-related kernel panic (or any kernel panic at all, actually). And upon repeating the latency test in Logic Pro, recording a signal into the Ensemble by looping an output to an input, the latency issue does indeed seem to be resolved.

To see how many unique audio files could be played back simultaneously, I used Logic Pro 8.0.2 to record sets of 12 stereo tracks (at 44.1kHz/24-bit), each lasting a minute and half, via an RME Fireface. With a drive in regular JBOD mode, Logic was able to play back 241 tracks at the same time, which is pretty staggering, and a significant improvement over the 101 tracks possible with a single 7200rpm SATA drive in the previous generation of Mac Pro. The only down side is that with this many tracks playing back at once, it usually took Logic about three or four seconds to gather the required data before starting playback or locating to a new point in the Project.

With Logic playing back from an Enhanced JBOD RAID Set, and so making use of the cache memory on the RAID card, I was reminded of the fact that Logic has a limit of 255 audio tracks. In other words, I was able to play back 255 tracks at once and still not run into any problems, although the disk performance indicator was beginning to show red peaks.

After reaching the ceiling in terms of the number of audio tracks supported by Logic, it didn't make much sense to try with other RAID configurations. As we've discussed in previous Apple Notes columns, using RAID in conjunction with audio software rarely gives a significant performance increase (in terms of the number of tracks), because although the throughput increases, the seek time remains the same. Where RAID excels in terms of performance, is usually with a small number of bandwidth intensive files, such as HD video, rather than a large number of — by today's standards, at least — low-bandwidth audio files.