Reason is becoming a much more rounded DAW, and one of the main areas to benefit is mastering. 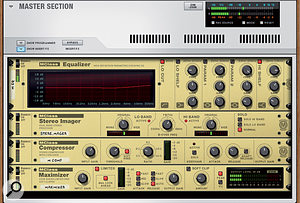 Reason's long-standing MClass devices are ideal for mastering. The Maximizer can provide digital clipping protection, level boosting, and even a bit of friendly distortion thanks to its Soft Clip section.

To some, mastering is about adding that final sheen to a finished mix and — regardless of the ethical considerations that surround this issue — cranking up the level of the track to compete with typical super-loud commercial mixes. To others, it's more about co-ordinating EP or album-length releases, deciding on track gaps or transitions, and balancing any level and tonal differences. These two approaches are not mutually exclusive, and, as we'll see this month, Reason has plenty to offer in both areas.

Reason has had its own complement of mastering devices for many years, in the form of the MClass suite. Your New Song template may well include them by default, in which case they'll probably appear in the Master Section's Insert FX section. That's also the best place to put them if you're creating the little critters from scratch.

For a detailed look at all MClass devices have a look at Simon Price's excellent November 2005 Reason column: /sos/nov05/articles/reasontech.htm. But I will just single out a few points for special mention here. 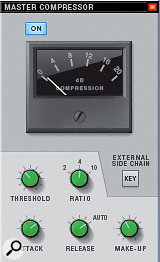 Mix 'glue' or something much more blatant — the Master Compressor is an ideal whole-mix mastering tool.First and foremost, if you want to fundamentally change the sound or character of your mix, don't start with mastering devices! The MClass devices can dial in significant changes, for sure, but they're essentially blunt tools, and deliberately so. Any underlying weaknesses in your mix are best dealt with in the mixer, or in the musical arrangement itself, and while you work on that sort of stuff leave these mastering tools bypassed.

When you are ready to finalise your mix, though, there is some accepted general good practice. First, engaging the MClass Equaliser's 30Hz Lo-cut filter is frequently a Good Thing, as there's rarely much musically useful stuff down in those near-subsonic frequencies, and cutting them can help dynamics devices later in the signal chain work better.

It's also smart to enable the MClass Maximizer (or another mastering-style limiter) even if you're not trying to increase the overall level of your track. That's because it can prevent digital 'overs' — those moments when you run out of resolution and harsh digital distortion is the result. Its most transparent setting is with the Input and Output Gain knobs left on 0dB, the Limiter section enabled, Look Ahead turned on, and Attack set to Fast.

And here's a final consideration before we get on to some more juicy stuff. Because of their essential role in avoiding overs, you should always run maximiser‑type devices last in your mastering signal flow. Putting one anywhere else risks a processor further down the line doing something to add gain and undo all the good work. And be aware that even then the very last thing in your signal chain is always the mixer's master fader. Keep that at 0dB and you won't get any nasty surprises, hot or cold.

Very broad, subtle EQ boosts and cuts are just the thing for treating a whole mix.

Mastering doesn't have to be about precision and clarity though. Sometimes a bit of dirt and pumping is exactly what a mix needs to wake it up and give it some attitude.

In Reason 6, don't overlook the Master Compressor. It's a great alternative to the MClass Compressor for introducing a bit of dynamism and even blatant pumping. The needle indicates how hard you're driving the compressor. If it never goes beyond a few dB of gain reduction, typically associated with using a high Threshold and a 2:1 Ratio, you'll just be getting some nice mix 'glue'. A lower Threshold and higher Ratio will lead to a much more pronounced effect.

Then there's Pulverizer. This has the advantage of being both a character compressor and providing some valve-style distortion. You could destroy a mix using this as a mastering processor, but if you bypass the Filter and ignore the modulation sections, and then restrict yourself to a smidgeon of squash and dirt, it can really add some colour. And thanks to the Dry/Wet blend knob you can blend your original mix with the pulverised version in varying amounts — parallel processing at its easiest.

Meanwhile, Scream 4 is currently the best option we have for tape saturation effects. Select the Tape mode and then adjust the P1 and P2 parameters for (tape) speed and compression (or saturation). The Damage Control knob varies the strength of the effect, and you'll almost certainly want to keep the Cut and Body sections disabled.

Exploring further means turning to third-party Rack Extensions. Softube's €25 Saturation Knob is one option, and its Type switch lets you choose to keep high frequencies clean while dirtying the lows, or vice versa. Joining Softube's smooth-sounding Trident A-Range EQ (which I looked at in October's Reason column) is the new Uhbik-Q from Uhe. This $39 device sports two 'semi-parametric' bands, and their 'wide bell' modes are ideal for broad whole-mix sculpting.

With the Ozone rack extension, state-of-the-art finalising comes to the Reason platform.

Probably the single most capable mastering-oriented tool currently available for Reason is iZotope's €65 Ozone Maximizer. You'd use this in place of the MClass Maximizer for avoiding digital overs and increasing average level with its impressively transparent IRC (Intelligent Release Control) modes. Pulling down the Threshold fader cranks up the level and the Margin knob decides how near you want the resulting signal to get to the 0dB full scale 'ceiling'.

Ozone brings something new to the table too: configurable Dither options. You use dither when reducing the resolution (or bit depth) of a digital recording, like when making a 16‑bit CD master from your 24‑bit song. It eradicates the artifacts and distortion you'd get if the last eight digits of each audio sample were just thrown away by introducing some numerical rounding and randomisation. The effect is to retain most of the detail of the original recording, but at the expense of added noise. However, if that noise is 'shaped' so it falls in parts of the frequency spectrum where human hearing isn't very sensitive, it can pretty much disappear — and you get to retain your 24-bit quality in a 16-bit delivery format.

If you're thinking Reason already 'does' dither, you'd be right. When you export a song or loop as an audio file, from the File menu, you get to choose the bit depth (24- or 16‑bits) of the resulting file. As most audio interfaces have 24‑bit converters, and Reason records at the highest resolution your interface allows, you'll almost always want to select the Dither option when you generate a 16‑bit file.

So why bother with Ozone? Well, aside from its prodigious level-boosting abilities it provides an alternative dither algorithm, iZotope's MBIT+, which is generally judged to be just about state-of-the-art. It also lets you choose the amount of dither, and noise shaping, and lets you reduce resolution right down to 8-bits. If you work in pop and rock styles you may feel this is all a bit academic, and you'd probably be right. But it's a bigger deal for acoustic and classical work, if you have very specific needs, or if you just want the best there is.

If you do use Ozone to do your bit-depth reduction and dither, make sure that (as we saw already with MClass Maximizer) it's the very last thing in your signal chain before hitting your master fader set to 0dB. And then never use Reason's own dither, in the Audio Export Settings box. Otherwise you'd have 'double dithered' — nasty!

If you're really serious about mastering you might want to invest in Flower Audio's €15 Loudness Meter. This little thing gives unambiguous, informative numerical info about the peak levels and perceived loudness of your mix. It also lets you instantly compare another 'reference' input, which could be a commercial track.

I said at the beginning of this column that mastering is as much about preparing whole albums as polishing individual songs. And while Reason lacks any CD-specific mastering or disc-burning features, you can use it in this role.

If you're in Reason 6, open up the new file template 'Album Mastering'. What this gives you is 10 stereo audio tracks, one for each CD track of a 10-track album. Feel free to add more audio tracks if your album is longer than this. The idea is that you place finished stereo masters in these tracks, working left to right in the time ruler, adjusting relative levels in the mixer, tweaking track gaps and fades in the sequencer, applying any per-track processing in each one's Audio Track device inserts, and then adding any overall, album-scale peak control or sweetening in the Master Section. When all that's done you can place the sequencer's 'E' end marker at the end of the last track and export the whole thing as a long Song audio file. You're still going to have to use a dedicated audio editing application to place CD track markers and make the burn, but at least this way you get to use all your favourite Reason devices to really shape the master in the first place.