We look at how to combine hardware and software processing within Logic for mastering purposes.

Since the demise of Digidesign's Sound Designer II as a mainstream editing platform, I've ended up doing virtually all my mastering within Apple Logic Pro, compiling and processing individual tracks before switching to Roxio's Jam to compile my album master. Although I've tried a whole range of mastering plug-ins, including the System 6000-inspired TC Electronic Powercore ones, the Waves suite, and independent products such as the PSP Vintage Warmer, I'm constantly amazed that my Drawmer DC2476 Masterflow hardware box still beats the pants off them all. I don't know why, but it sounds more 'analogue' than any other digital processor I've used.

Accessing the DC2476, or any other external hardware processor for that matter, within Logic can be neatly achieved using the I/O plug-in (available from the Helper plug-in submenu), provided that you have at least two spare inputs and outputs on your interface. The plug-in lets you select a physical output to use as an insert send, and a physical input to use as your insert return. For mastering, you'll obviously need the stereo version, and if you're digitally connecting external hardware, you'll either need to set the unit to external sync or else run everything in your system from a master clock generator.

It's probably worth mentioning here, though, that the current version of Logic seems to have a bug that prevents the I/O plug-in working properly when inserted into the main stereo output Audio object. One workaround for this is to route all the tracks and busses to another Output object (3+4 for example), and then send to your external hardware from that, returning the externally processed audio via an Aux Audio object set to unity gain. The Aux object can then feed the main stereo outputs.

However, even if this bug did not exist, there is still an advantage in inserting your mastering processing into a normal stereo Track Audio object. That's because, when you're mastering the different tracks that will comprise an album, it helps to pick one track, optimise that, and then use it as a yardstick for the other tracks you need to work on. As a rule, I work on the loudest track first, optimise it using whatever processing is required, then bounce it to a new 24-bit interleaved AIFF file. Note that it can help to open your bounced files in the Sample Editor, so that you can trim any excess 'dead air' from around the song or fade out the thumps and bangs that are occasionally introduced at the start of the file by certain plug-ins. However, do leave at margin of at least a half a second at the start of each track for the benefit of those CD players that are a bit slow at cuing tracks — you can always make this truly silent by using the Silence command in the Sample Editor window's Functions menu.

The I/O plug-in is the key to accessing external processing, such as the multi-band tube emulation of the Drawmer DC2476, while mastering in Logic.

Once I'm happy with the first track, I drop it onto a spare stereo track in the Arrange window, where it can be played for direct comparison with the next track while I am fine-tuning plug-in and processor settings, the aim being to get the second track to sound as if it belongs to the same album as the first. Obviously it's important to make sure that the faders of both Track Audio objects are initially at unity gain so that there's no level mismatch between them, but you may find that you need to increase the second track's limiter gain to achieve similar subjective levels.

I usually start work with tracks that have similar instrumentation and style. I also favour working on all the heavier songs first, before working down to the ballads if the album is that varied. Working from loudest to quietest helps you match the subjective levels of the different tracks making up the album with less risk of running out of headroom. You can make final level adjustments in your CD burning program, but if you turn down a track that has already been limited, you're wasting headroom that might have been better utilised by limiting less in the first place. After all, limiting very rarely makes anything sound better, it just makes it sound louder, so there's no point in limiting the quieter tracks more than you have to.

There have been a couple of Logic-related upgrades recently. The Mac OS X Waveburner utility has reached version 1.1.2 and is now almost up to the feature and performance levels of its OS 9 counterpart. It's definitely more stable now, the undo feature finally works as expected, and plug-ins no longer crash or lose their parameter settings. Speaking of plug-ins, Waveburner can use all of your third-party AU effects plug-ins as well as Logic 's own, but with the strange exception of the Space Designer reverb.

Apple's latest Pro Application Support 3.1 update is also recommended if you are running Logic, although it often doesn't show up in Software Update unless you've installed Final Cut Pro as well. Another well-hidden Apple item is the availability of a free trial of Logic Express downloadable from www.apple.com/logicexpress/trial. It's a 30-day time-limited version, and a perfect way to dip your toes into the choppy waters of Logic, even if you're thinking of going for Logic Pro in the end.

More problems with Logic 's half-hearted plug-in delay compensation (PDC) are appearing as users start to put it through its paces. The one I find most annoying revolves around the use of Universal Audio's UAD1 plug-ins and, as far as I can tell, has only appeared since v7.1.1. If you insert a UAD1 plug-in into a track or buss and have PDC set to All, only the UAD1 plug-in inserted into the first slot will have its latency compensated for, which renders the feature almost useless in a lot of cases. One workaround seems to be to reorganise Logic 's memory by double-clicking the memory value below the tempo display in the Transport — although this doesn't always work for me. The only other option is to Freeze the UAD1 tracks with PDC set to Audio Tracks And Instruments to get everything back in time. Apple really need to get PDC sorted out properly in the next release of Logic.

On a side note, the memory reorganisation tip I mentioned above is often useful when you're having spurious memory-related or CPU problems. It's often helped me to get a Song that's started to complain running again. Another tip is to start and stop Logic 's transport, and then start it again. This has the added advantage of making sure Logic realises that both CPUs are actually being used on a dual-processor Mac, so you don't get CPU overload errors. Stephen Bennett

To me, the process of mastering is about making the songs on an album sound as good as they possibly can, but at the same time ensuring that they sit comfortably next to each other in terms of tonal balance and subjective loudness. This can be tricky when working on songs recorded in different studios, or when assembling compilation albums. Often the bass end will need a little equalising to compensate for deficiencies in the original monitoring environment. Because I don't have a 'top of the tree' acoustically designed mastering room I'll also compare my results with similarly styled commercial releases that I deem to be well recorded. After that the album also gets checked on several other sound systems to ensure that it 'travels' well. 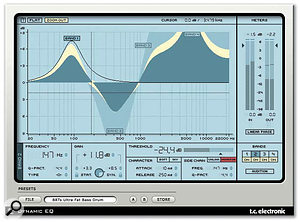 The TC Electronic Powercore's Dynamic EQ plug-in is great for adding weight to bass instruments without otherwise changing the tonality of the overall mix to any great extent.Some digital equalisers seem to need lots of cut or boost to get the necessary tonal change, but the DC2476 sounds a lot more analogue, and often a decibel here and there is all that's needed. Most times I'll add only a little 80-100Hz boost to beef up a weak bass, but this may be teamed with an additional filter to roll off very low frequencies that might otherwise compromise the bass end and make it unmanageable when played over smaller speakers. A useful tip, if you have access to it, is to try dynamic EQ to add punch to bass notes in situations where you don't want to affect the tonality in the spaces between the bass notes. Dynamic EQ can apply cut or boost whenever the signal exceeds a certain threshold in a particular frequency range, so you can, in theory, add more EQ to problem sounds without disturbing the rest of the mix too much. There's a dynamic EQ in the DC2476, but I tend to use the Powercore Dynamic EQ plug-in instead, because of its intuitive graphical interface.

Adding a gentle 'air' EQ boost at 12-14kHz is also very commonplace, as it helps to separate the instruments in the mix, but it should be subtle. If you do this with a really good equaliser, the sound will become better focused, but without any excessive tonal changes being introduced. However, every mastering job is of course different, so you have to train your ears to pick out the areas of the spectrum that really need attention. There is no fairy dust setting that works on everything.

That's all for now, but stay tuned for more mastering tips in Part 2, where I'll be looking at how to get the best from Logic 's built-in plug-ins in this context. Plus, I'll be revealing how to get track levels and inter-song gaps just right.