Use Logic's stock plug-ins to decongest the middle of your mix.

In this month's Logic workshop, we look at implementing some of the concepts of 'clearing out the middle' that mix engineer Dave Pensado discussed in the 'Into The Lair' segment of his excellent Internet TV show, Pensado's Place. In episodes nine to 10, Dave presents different methods for clearing out the middle of a mix using a variety of third-party and stock Pro Tools plug-ins. We're going to try Dave's techniques using only stock Logic plug-ins. But why might you want or need to do this?

In mixing, a useful goal is to use the whole of the stereo field to give your mix greater width but leave the centre image for the most important elements, such as the vocals or drums. In opening out the middle of a mix, we'll try to move certain of its elements away from the centre and into the sides, to leave room for the key elements to be heard clearly. To do this, we need to introduce differences between what we send to the left and right speakers.

One of the easiest things to try first is panning. Try mixing with an 'LCR' approach, panning all the elements of a mix either hard left, hard right or dead centre. For example, on a simple rock mix, placing the vocal, bass, kick and snare dead centre and panning the first guitar and drum overhead hard left, with the second guitar and drum overhead hard right, will achieve width. I would suggest trying a mix using that technique, to see how just using the pan knob aggressively can help you achieve an open-sounding mix without a congested middle. However, there are many other ways to achieve width, so let's investigate.

First of all, let's consider a mono synth pad. In order to push it out from the centre and widen it away from the middle, we need to employ some stereo enhancement.

Logic's Stereo Spread works by distributing frequency bands from the centre to the left and right channels. It works much like the classic widening trick performed on a stereo graphic equaliser: to widen the input material, you would boost and cut alternate bands on the left channel, then on the right channel you would do the exact opposite. For example, where there is a boost on the left channel, you would apply a corresponding cut on the right channel. Stereo widening is usually most effective in the mid-frequency to high-frequency areas, so it is worth setting the lower and upper frequency ranges of the plug-in carefully to frame the area you want to widen. In the Stereo Spread plug-in screen, you can see that I have used the Lower and Higher Frequency controls to set the widening to begin at around 1200Hz, and then used the Lower Intensity and Upper Intensity controls to gradually increase the amount of widening as the frequency rises. You can hear how the Stereo Spread plug-in clears out the centre by bypassing the plug-in and listening for the difference.

Let's now consider how to widen a synthesizer part that's already in stereo. We could experiment with the Stereo Spread plug-in, as above, to increase the width — or we could try a bit of M/S (Mid/Side) processing. 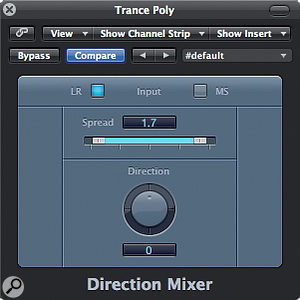 For working with stereo signals, the Direction Mixer can be used to increase the ratio of the stereo difference signal to the mono component.

Another area in which you could use the Direction Mixer plug-in to help declutter the middle of your mix is on reverb returns:

In ITL nine, part two, Dave Pensado reveals a really cool technique for increasing the stereo width of a reverb by using two slightly different reverb settings panned hard left and hard right. The difference between the two settings increases the apparent width. Dave's example uses Pro Tools' stock reverb plug-in. We will use Logic's included PlatinumVerb, but you could just as easily use Space Designer.

Using two reverb plug-ins panned hard left and hard right with slightly different settings can help to reduce the amount of reverb in the centre of your mix.

Experiment with changing other parameters too, and listen to how they change the sense of perceived width of the reverb.

Let's consider one last way to increase the stereo width of a mono part. Create a mono electric guitar or synth part and on it call up a stereo instance of the Sample Delay plug-in. The German scientist Helmut Haas wrote that when two identical signals, each played through a separate speaker, are delayed by anything between one and 30 ms, a sense of a broadening of the primary sound source is heard without there being a perceived echo.

Putting a stereo delay across a mono track and simply delaying one side by a small amount will create quite a dramatic stereo effect. It's worth noting that once you delay one side in respect of the other by more than 30ms, rather than perceiving an increase in width you will begin to hear the effect as a simple echo. Within your Sample Delay plug-in, set the Delay R to 1323 samples, approximately 30ms at a sample rate of 44.1kHz. You will notice a dramatic change in the stereo width of the part and, hence, a clearing of the middle. Also notice now that the left side will probably sound louder. This is a consequence of the fact that we often perceive an earlier signal to be louder even if the left and right channels are the same level. 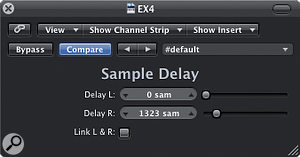 To add stereo width to a mono synthesizer track, try using a stereo instance of the Sample Delay plug-in. Just watch out for cancellation problems that could occur in mono.

You should also be aware that delaying one side can produce significant comb filtering when the two channels are summed to mono. You can check for unpleasant cancellation by inserting an instance of Logic's gain plug-in after the Sample Delay and clicking the mono button on and then off. If there is any unpleasant cancellation, adjust the delay time to minimise this.

We don't have the space to go through all of the ideas Dave presented for clearing out the middle of mixes, so make sure you check out his show. He is both hugely informative and highly entertaining. Look for the 'Into The Lair' section, episodes nine and 10, at www.pensadosplace.tv.