A top-notch jazz session is given a touch of class at mixdown.

This month's Mix Rescue was sent to us from a group of extremely talented and enviably experienced US jazz musicians who had recorded their band Volcano playing live in a large rug warehouse with 14-foot high ceilings. The track, called 'Mr EP', is part of their in-progress album Bridge, and guitarist Yavuz Akyazici approached me with the challenge of working on his mix. However, this turned out to be not so much a 'rescue' as a polishing job, as the musical performances were truly virtuoso and Yavuz had already done a very respectable mix himself. 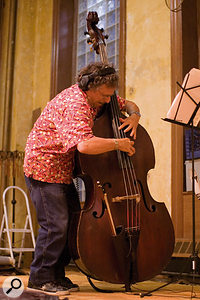 The recording was made directly into Digidesign Pro Tools LE using the Digidesign Digi 002 interface. The live performance was recorded directly onto 11 tracks. The drums were recorded using a Focusrite Octopre fed into Digi 002's ADAT inputs. The overheads comprised a pair of Oktava MK012s with Scott Dorsey modifications. The kick and toms were recorded using an Apex DP1 drum-mic set, while the snare was picked up using another mic from the Apex DP1 set, as it seemed to suit the sound better than the Shure SM57 they tried originally. According to Yavuz, slight limiting was used on the Octopre to prevent digital clipping, but other than mild compression on some parts that was the only processing on the tracks.

The double bass was miked using an Audio-Technica clip-on ATM35 mic attached to the bridge of the bass. A second mic, a Rode NT1, was set up between 18 and 24 inches away and directed towards the sound hole. However, Yavuz mentioned that Joe moves around so much he can't swear where it was pointing during the actual recording! Both mics were fed into Seventh Circle J99 preamps which Yavuz had built himself. 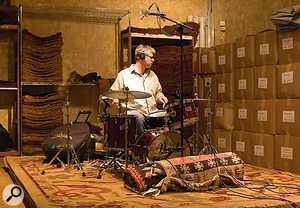 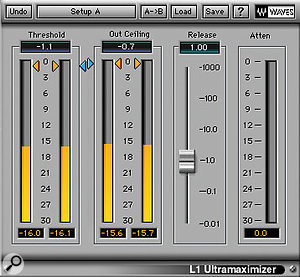 The drum parts benefited from some light limiting and the judicious application of Noveltech's Character plug-in.The Sax was recorded using a single Sennheiser MD421 MkII, this time fed into a different Seventh Circle preamp, while the guitar was DI'd using a Line 6 PodXT fed into a Seventh Circle N72 preamp. The song was written by Yavuz out of respect for Eric Person's sax playing, hence the title 'Mr EP'.

On listening to the band's mix, I could tell right away that everything was recorded very cleanly with mostly decent separation — though there's always a significant amount of spill into double-bass mics and also into tom mics on the drum kit. To me the reverb used over the mix was slightly obvious and the sax had a rather close-miked quality about it that robbed it of some of its natural warmth, but it all sounded pretty good anyway. On closer listening, I also felt the kick drum sounded a bit too lightweight. It was clearly tuned high for jazz playing, but I felt this track needed a bit more depth.

For the bass track, I used the bridge mic and the distant mic tracks together, dipping a little 1.3kHz out of the bridge mic using the SSL Duende Channel Strip to round out the sound. I also used the Channel Strip to add some very gentle compression with a ratio of 2.7:1 to even things out, as I felt the bridge mic had a somewhat unnatural presence to it. For the more distant mic, I used no processing at all — I just balanced it with the bridge mic to give a nice lively sound. There was quite a bit of spill on this mic from the rest of the band, but it didn't cause any problems when the rest of the faders were brought up.

For the drum kit the kick drum was my only real cause of concern. It was well recorded, but seemed a bit short on weight due to its high tuning. Again I used the trick of getting Logic 's Audio To Score function to create MIDI notes corresponding to each beat, and then assigned these to Toontrack's EZ Drummer kick drum. By bringing this up beneath the original kick, I managed to add weight without losing the feel and character of the original drum. Logic also managed to follow the dynamics of the original kick really well when it assigned the MIDI notes. As I was clearly dealing with serious jazz musicians here, I asked them what they thought of the mix before confessing what I'd done... Happily they liked it! 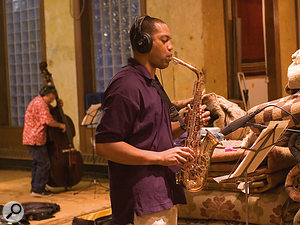 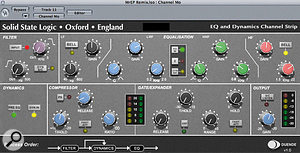 The raw sax recording sounded rather thin, but some EQ and compression from SSL Duende's Channel Strip plug-in set things straight.The snare also sounded really good left just as it was, so I simply inserted a limiter to tame some of the extreme playing dynamics. As usual I muted the tom tracks between hits, by destructive editing in the case of the floor tom and by using a gate on the smaller tom. As always, the action of the gate sounds quite alarming when you hear the track soloed, but once you mix in the overheads, the unnatural decays and odd bits of breakthrough simply disappear. Again I applied no EQ to the overheads or the toms, but I did group the entire drum kit and use Noveltech's Character plug-in to add a bit more high-end definition to the whole kit mix. This was followed up by a Waves L1 limiter to keep a lid on any peaks, though the gain-reduction meter barely flickered, and only on peaks.

I felt the guitar sound was a little dull, and Yavuz told me he'd EQ'd it in his mix, so I called up another instance of Character and dialled in more upper-mid definition without it becoming too obvious. I could have used EQ, but the dynamic processing in Character seemed more sympathetic.

The sax needed slightly more work, as I wanted it to sound a bit thicker and more organic. I achieved this using some gentle EQ courtesy of the SSL Duende Channel Strip, though any good parametric EQ should be able to a similar job. Essentially I added some lower mid-range boost at around 240Hz to put back some of the warmth lost by close-miking, while dipping out some 1.5kHz, which is what was making the sax sound thin and a hint nasal. Again, the compressor in the channel strip was used very lightly on a 3:1 ratio to add some density to the sound, but I didn't do anything drastic.

Volcano are a four-piece Jazz outfit. Taking care of drumming duties is Matt Wilson, who was nominated as a rising star of jazz for three years running in Downbeat magazine's poll and was voted outright winner in the third year. He also plays with Charlie Haden and has played with a number of leading names in US jazz including Dewey Redman, Cecil McBee, and Lee Konitz. On sax is Eric Person, also boasting an impressive recording and performing track record with the Dave Holland Quintet and Ben Harper, as well as being a member of the Chico Hamilton Band for many years. Joe Fonda plays double bass with a unique percussive style and has played with Anthony Braxton for several years, in addition to touring Europe many times with The Fonda Stevens Group. Yavuz Akyazici completes the line-up on guitar.

During the original recording sessions, Brian Pinneo looked after the engineering duties, while Tony Kirman took the wonderfully detailed pictures printed with this article.

That left only the balancing, panning and final processing to deal with. For reverb, I wanted something less obvious and more intimate-sounding than whatever had been used on the original mix, so I called up Audio Ease Altiverb and chose a live jazz-club Impulse Response that I felt complemented the music well without getting in the way. 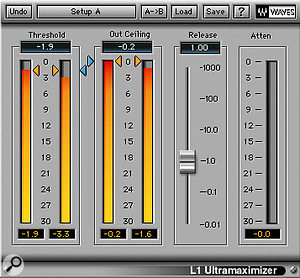 Dynamics processing used on the main mix buss comprised SSL Duende's Stereo Bus Compressor (top) and Waves L1 Ultramaximizer.The guitar was panned just eight points to the right, with the sax eight points to the left, and I used the track level automation to balance the guitar against the sax so that it matched it nicely for the duet sections and stepped forward by a decibel or two for solo sections. Similarly, the drum overheads were panned to around nine o'clock and three o'clock, rather than hard left and right. On paper this makes the mix look quite narrow, but in reality it matches the way the band might sound in a club pretty well and stops the drum kit sounding as wide as the entire sound stage.

On the overall mix I used an SSL Duende Stereo Bus Compressor with a 2:1 ratio and a threshold setting that only produced two or three decibels of gain reduction on the loudest parts. As an alternative I also tried the UAD1 LA2A, and that sounded very similar. An SSL Duende Channel Strip was used to drop the 350Hz region by just one decibel to add some low mid-range clarity, and the trusty Waves L1 stood guard at the end of the line to watch for peaks. I was quite gentle in applying reverb to the various parts, with the only significant amounts being added to the snare drum, drum overheads, and sax parts, though I did add a little to the PodXT guitar too, just to help it blend with the miked sounds.

From my vantage point, cleaning up the tom spill and choosing a suitable convolution reverb made the greatest contributions to the mix. The rest was down to very fine tweaking, and if I hadn't EQ'd or compressed anything the mix would still have sounded nice. It was a joy to work with performances of such a calibre, and having everything cleanly recorded with no processing (other than the PodXT amp modelling on the guitar) really helped.

I sent a preliminary mix to Yavuz, who came back with a few artistic directions which I followed for the mix version we finally settled on. Yavuz felt the bass might have been a hint too bassy, but the only way to be sure that this is exactly right is to get the track professionally mastered. One of my pairs of monitors told be there wasn't quite enough bass, while the other pair swore there was a bit too much! 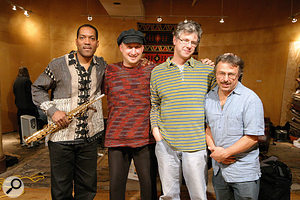 Yavuz Akyazici: "I just want to say that it sounds very good — I really like the remix and the guitar sounds great. To me the panning now sounds ideal. The bass sounded good, but a bit heavy on the bass frequencies in the original revised mix. However the version with a little less bass sounded right. Somehow, it sounds softer than anything I did before, and sounds a lot more like a record.

I do not know how else to describe it. I could not describe all the nuances and the reason for the well-balanced sound, but I see now that there was a lot of stuff going on under the hood which is hard to describe. I do not like most of the commercially mixed jazz CDs, which is one of the reasons I went to all this trouble to learn mixing, building my own mic preamps, modifying mics, and so on, so I'm very critical about most mixes. I hope I can learn enough from this to improve my mixing skills. Congratulations on a great mix!"

Hear The Differences For Yourself!

Listen to the changes I made by checking out the following audio examples available for download at www.soundonsound.com/sos/sep06/:

The recorded sound from the kick-drum mic, which sounded rather lightweight.

The guitar part with some subtle processing from Noveltech's Character plug-in.

The rather thin-sounding initial sax recording.

The saxophone with processing from SSL Duende to give it extra weight and added reverb from Audio Ease Altiverb.

Yavuz's original mix, as sent in to Mix Rescue.